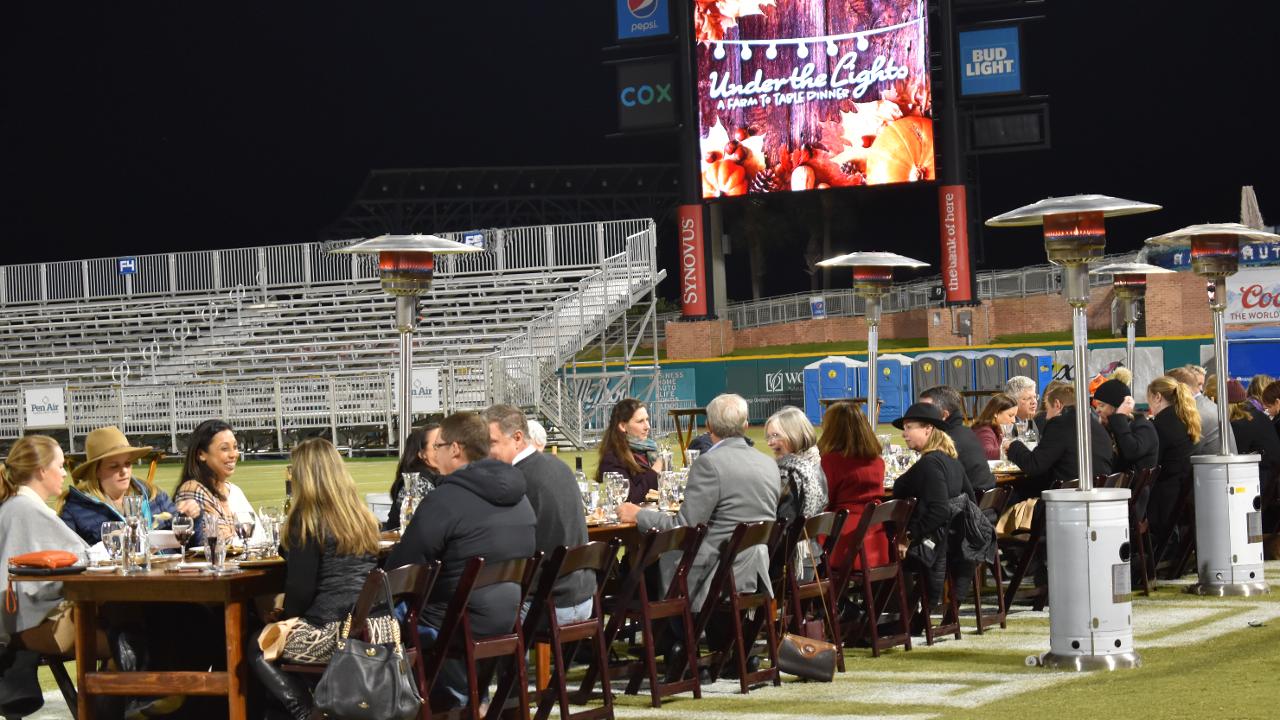 The occasional wind gust from adjacent Pensacola Bay brought a little extra obstacle to serving a five-course dinner on a football field.

But it also furthered the unique element of the Nov. 15 Farm To Table Dinner at Blue Wahoos Stadium, where 40-people gathered under a clear, moonlit sky and cooler-than-usual temperatures to enjoy a first-ever experience.

Gourmet dining in the end zone. Under the goalposts. Wine on ice in the dugout area. Music from the stadium sound system to enhance the festive setting.

"I love this," said Shannon Reeves, the Blue Wahoos events manager. "It's a nice fall night. Everybody dressed up and bundled. It's perfect."

"The weather has thrown something new at us, which makes it fun," said chef James Briscione, co-owner with wife Brooke Parkhurst of Angelena's Ristoriante Italiano in downtown Pensacola, as both scrambled to get the final preparations completed.

"With all the amazing things going on downtown like Gallery Night (also Nov. 15), this weather puts you in the right spirit. This is the kickoff to the holiday season. So it's a fun challenge."

The previous two Farm To Table events, hosted by the Blue Wahoos, were in September (2018) and earlier this year in May at the Hancock Whitney Club when Admiral Fetterman Field was set up for baseball and the breeze brought a welcome dash of air conditioning.

The challenge for Briscione, who was joined by Blue Wahoos executive chef Travis Wilson, along with the team from RS3 Hospitality, was getting the food prep finalized fast enough to carry from the Blue Wahoos team dugout to the table guests a short distance away.

The temperatures at 6 p.m. that night had already begun to plummet. Fine for various wines on ice, but a challenge to keep the food hot.

"We are going to be cooking ravioli at the last second and running it straight down to the field. A little planning and lot of hustle," Briscione said, jokingly. "Some of it was just in designing the menu, knowing we're not walking it straight out of the kitchen into a dining room, and knowing we have all these elements to contend with."

The following afternoon, the University of West Florida football team played its final home game of the season on the field, beating West Alabama in a back and forth game.

"We've had the two prior Farm to Tables when the field was set up for baseball," Reeves said. "We were excited to have this in the end zone and give the idea to come here, have the experience of dinner on the field.

Briscione has prepared meals in a variety of restaurants and studio kitchens during his many appearances on the Food Network.

Serving up a five-course dinner on a football field was a first for the former Booker T. Washington High football player.

"It's fantastic to be out here and see the tables set on the field. And now people starting to arrive," Briscione said that night. "Weeks and weeks of planning all went into this. Now, when you see a drink in everyone's hand and smiles on their faces it's a great thing."