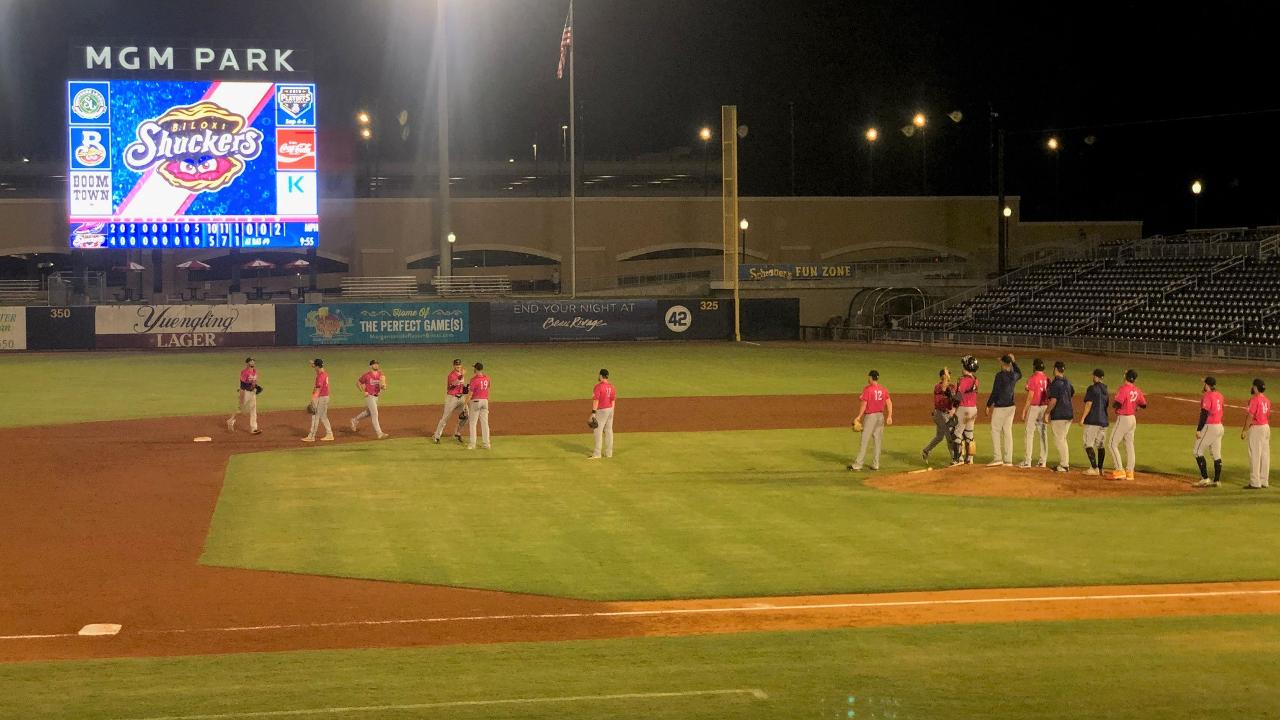 The Blue Wahoos celebrate their 10-5 win Saturday night against the Biloxi Shuckers in MGM Park in Biloxi, which forced a deciding game on Sunday in their Southern League South Division playoff series. (Jonathan Griffith/Pensacola Blue Wahoos)

BILOXI, Miss. -- Blue Wahoos catcher Ryan Jeffers had struggled at the plate with one hit in the previous three playoff games.

Saturday night, however, Jeffers produced two of the biggest hits, including his third RBI in the ninth inning of a five-run rally, as the Blue Wahoos pulled off a 10-5 victory in Game 4 against the Biloxi Shuckers to force a deciding game Sunday at MGM Park in their Southern League South Division playoff series.

Once down 0-2 in this series, the Blue Wahoos have now twice thwarted a Shuckers' planned celebration and made this an up-for-grabs finale in Biloxi. They staved off elimination Friday with a 3-2 win in the lone game at Blue Wahoos Stadium. As the wild card team, the Blue Wahoos got only one home game.

The Blue Wahoos did it Saturday after the Shuckers tied the game 5-5 with a run in the eighth. The Blue Wahoos had eight consecutive batters reach base in the ninth to blow open the game.

Jeffers, whose two-run homer in the third inning tied the game 4-4, singled with the bases-loaded in the ninth to score Alex Kirilloff and make it 8-5. On the same play, Royce Lewis was thrown out at the plate.

But Jose Miranda, a player the Blue Wahoos gained last weekend from the Fort Myers Miracle, continued his playoff success with a two-run double to make it 10-5. The major rally started with one out when Caleb Hamilton walked and Mark Contreras singled to put runners on the corners.

Kirilloff, who had another big day at the plate, singled to score Hamilton, then Royce Lewis followed with an RBI single.

Blue Wahoos reliever Jonny Cheshire, who gave up a game-tying hit in the eighth, followed in the ninth by getting a double play and then retiring the next batter to end the game and finish a strong effort by the bullpen.

It's uncertain how each team will use their pitching staff on Sunday with so much uncertainty on a starter, but the Blue Wahoos enter the game swinging the bats well. They had 10 hits Saturday with four of those going for extra bases.

They hit three more homers and now have eight in this playoff series.

Kirilloff, the Minnesota Twins No. 1 pick in 2016 and a top-15 rated prospect in all minor league baseball, hit his fourth playoff homer - one in each game - to lead off Saturday's game.

The Blue Wahoos took a 2-0 lead in the first after Kirilloff's homer was followed by Travis Blankenhorn's sacrifice fly to score Lewis.

After Jeffers' blast to tie the game in the third, Mark Contreras gave the Blue Wahoos a 5-4 lead with his leadoff homer in the seventh.

The winner of Sunday's deciding game will advance to play the Jackson (Tenn.) Generals, the 2018 Southern League champions, who knocked regular-season Montgomery in a 3-1 series win in the North Division playoffs. The Biscuits had posted the best overall record in the league during the season.

Should the Blue Wahoos win, they will host Game 1 and Game 2 at Blue Wahoos Stadium on Tuesday and Wednesday. A travel day will ensue Thursday with the series concluding in Jackson, Tenn.

The Blue Wahoos have never advanced into a league championship series in their previous four playoff appearances. They shared the 2017 SL championship with the Chattanooga Lookouts, then a Twins affiliate, after both teams won their divisional series and the final round was called off due to a hurricane threat.