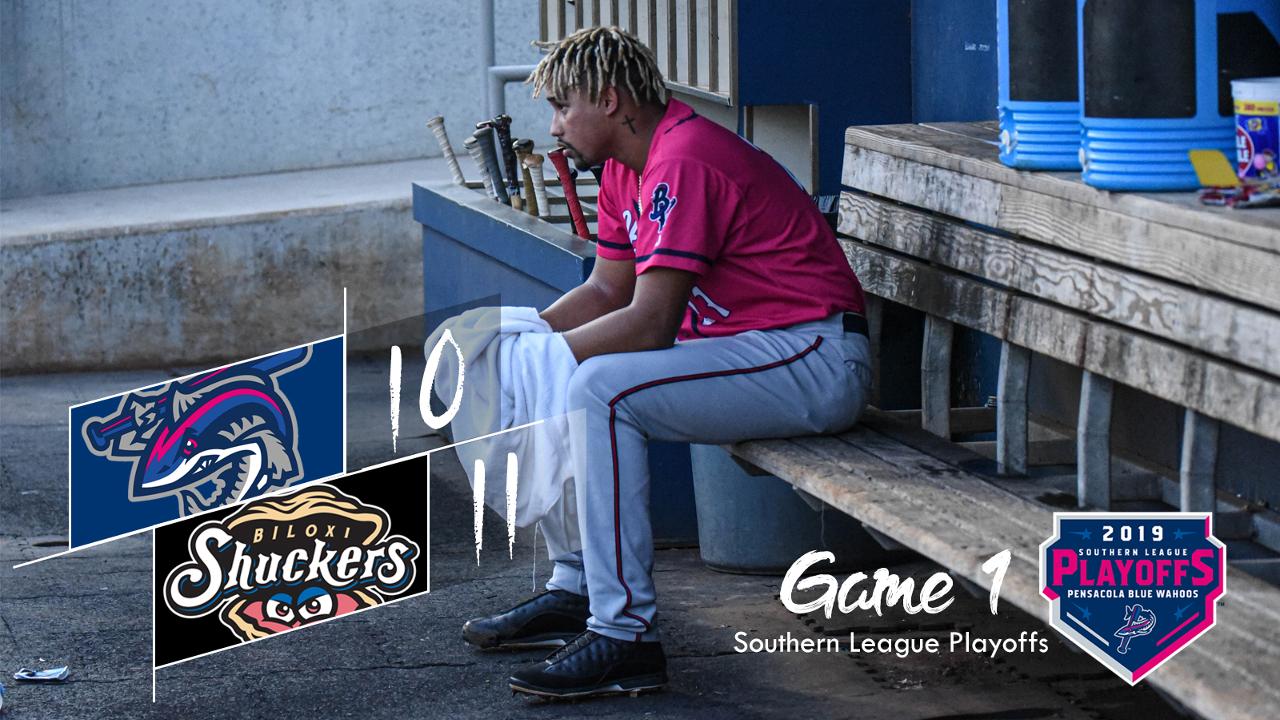 It was the fitting reaction for an agonizing Game 1 playoff loss at Biloxi's MGM Park.

After tying the game against Biloxi with a ninth-inning grand slam by Alex Kirilloff, then a go-ahead homer from Royce Lewis as the next batter, the Blue Wahoos failed to hold the lead, then lost 11-10 on a two-out, none on, walk-off home run in the 10th inning by the Shuckers' Dillon Thomas.

It was every bit as wild and stunning as you might think in a three hour, 51 minute drama.

And numbing for the Blue Wahoos, who are now 1-7 in history against the Shuckers in post-season.

"Baseball is just tough like that sometimes," Borrego said. "I'm feeling comfortable when you come back with a grand slam and then the next guy hits another one to take a lead.

"But for me… early in the game we just made too many mistakes. We just have pitch better. But you know, there is still a lot of baseball to go. We have to catch those guys (Thursday) and come back tied up when we play in Pensacola."

This is the team's fifth straight playoff appearance, first as a Minnesota Twins affiliate, and matching the second-best streak in Southern League history.

But Biloxi has been a tough puzzle to figure. Of all the post-season games these two have played, nothing matched Wednesday.

In addition to the combined 21 runs, the teams connected on 29 hits, including six home runs between them in this game.

Each team scored five runs in one inning. The Shuckers did it in the fifth inning, after the Blue Wahoos rallied from a 2-0 deficit to take a 3-2 lead.

The Shuckers got six of their runs in this game off two Blue Wahoos pitchers - Jonny Cheshire and Anthony Vizcaya -- whom had not allowed a run in two months. Cheshire gave up a pair of two-run homers in the fifth after not allowing a run in his previous 10 appearances.

The Blue Wahoos also had two runners thrown out at the plate. It was that kind of fate on this night.

"We're never out of a game," said the Shuckers Thomas' in a post-game interview to the remaining crowd. "Our dugout is always loose. We just keep playing good baseball."

Vizcaya was tagged for a home run as well in the sixth inning, his first run allowed since July 15. Combined they had gone 36 innings without allowing a run.

"They were just missing on location," Borrego said. "Unfortunately, that kind of thing happens. You just have to move on. Those guys have been very good for us."

Trailed 9-5 in the ninth, the Blue Wahoos showed their resolve.

Facing Nate Griep, a Southern League All-Star closer, who was elevated to Triple-A, then brought in for the playoffs, the Blue Wahoos loaded the bases on a pair of walks, sandwiched by Caleb Hamilton's double.

After a mound visit to calm Griep, Kirilloff hit a 1-0 pitch into the sky and the rainbow trajectory just cleared the right field wall for the grand slam. As the Blue Wahoos dugout was celebrating, Lewis stepped up and launched one over the left field fence.

It was the Blue Wahoos first lead since early in the game.

Then Trevor Larnarch, the third of the Twins' No. 1 draft picks on this team, barely missed a trifecta when his ball was caught at the base of the wall.

But in the bottom of the ninth with the Blue Wahoos' Alex Phillips on the mound, the Shuckers' Joantgel Segovia hit a 1-2 pitch with two out between the hole at first and second, scoring C.J. Hinosa, who had advanced into scoring position on a wild pitch.

"He got his bat out there and hit a good pitch," Borrego said.

It wound up leading into a deflating end.