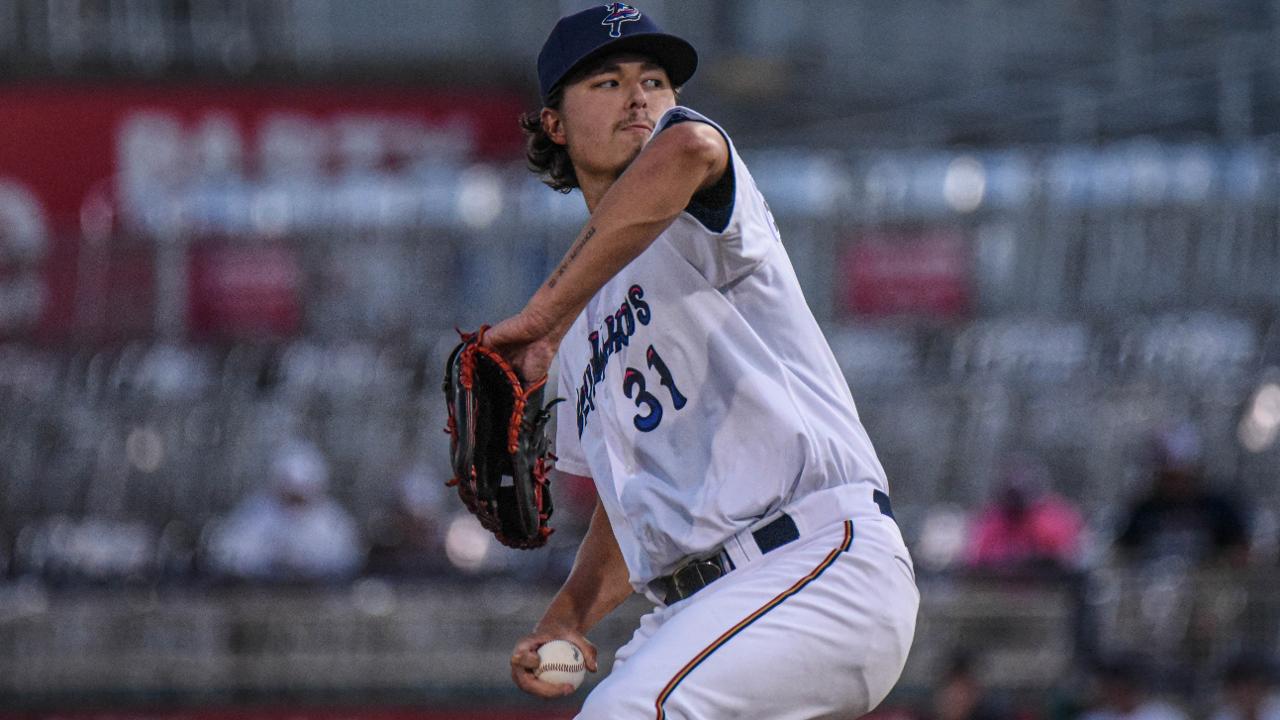 The Blue Wahoos Jordan Balazovic, who joined the team earlier this week from the Fort Myers Miracle, delivers a pitch in his Double-A debut during Friday's Game 3 playoff win against Biloxi. (Daniel Venn)

Their bags were packed, their own playoff series canceled last weekend by Hurricane Dorian's threat, when Jordan Balazovic and Dakota Chalmers were summoned with a special offer.

The two Fort Myers Miracle pitchers were asked to leap a level and join the Pensacola Blue Wahoos in the playoffs.

"They (Miracle coaches) called me and Jordan in, and said, "Hey, (Blue Wahos) need some help. If you guys are willing.' So we did," Chalmers said.

It's now a memorable decision.

The tandem combined Friday night to deliver eight stellar innings in their Double-A debut, helping lead the Blue Wahoos to a riveting 3-2 victory against the Biloxi Shuckers in Game 3 of the Southern League division series, before a crowd of 3,99 at Blue Wahoos Stadium.

The do-or-die win forced a Game 4 Saturday night (6:35 p.m.) back in Biloxi. It also thwarted the Shuckers from a three-game sweep and celebration on the Blue Wahoos field.

Balazovic worked into the fifth inning Friday, after not allowing a hit the first four innings. He then ran into trouble starting with three consecutive singles. Chalmers inherited a difficult situation in relief with runners in scoring position and the game tied. But he got the final out of the inning, then pitched through the eighth inning before closer Anthony Vizcaya sealed the win.

Balazovic and Chalmers combined to strike out 11 Biloxi batters and walk only two. Chalmers did not allow a hit in his 3.1 innings worked.

It was welcome aid for the Blue Wahoos, who were able to extend their season with a home playoff win in front of 3,906 at the bayfront stadium.

"That's something you think about before the game when you know you're going to pitch," said Chalmers, as a post-game fireworks display was thundering in the background. "You know it's a high stakes game.

"But when your name gets called, you're just trying to get outs every time you go out there. It doesn't really make a difference what time of year it is, what kind of game.

"Afterwards you feel good about what happened."

Balazovic, only 20, had never pitched in a post-season game, much less start one as he did Friday. Chalmers, 22, had never been used as a reliever after starting 18 games this year for both the Miracle and lower-level, Gulf Coast League Twins, in Fort Myers.

Both factored into the Miracle's season, which included a first-place finish in the first half of the Florida State League season.

But the FSL team presidents voted during Labor Day weekend to cancel the final couple games of the regular season, then all of the playoff schedule, to avoid a hurricane's potential wrath.

It led to a decision by Minnesota Twins' minor league executives to bring both righthanded pitchers, along with infielder Jose Miranda and others, to Pensacola to be on the Blue Wahoos playoff roster.

They looked right at home. And it happened after they were literally on their way back to their homes and time away from baseball.

"I had adrenaline going when I was out there in the first inning and I didn't want to overdo it," said Balazovic, who grew up in Ontario, Canada. "My main thing was attacking, getting ahead and making them put the ball in play.

"After the first inning I settled in."

Both are part of the Twins' talent-deep minor league system.

After six Blue Wahoos pitchers this season all made their MLB debut with the Twins, the newcomers Friday added to the potential, next wave.

"I am so happy for those guys," said Blue Wahoos manager Ramon Borrego. "I had Balazovic with me a long time ago. I can see how he's grown.

"I had heard a lot of good things about Chalmers. When you bring those guys into their debut and then yo use how well they handle everything, that was fun to watch."

The Blue Wahoos jumped to a 2-0 lead after four innings on home runs by Alex Kirilloff and Ryan Castillo. Kirilloff's blast in the third inning hit the Blue Wahoos logo atop the right field scoreboard. It was one of the most prodigious blasts struck in stadium history.

Costello banked a shot off the batting eye in straightaway center.

The Shuckers tied the game in the top of the fifth. After throwing four hitless innings, Balazovic gave up three consecutive singles. Joantgel Segovia followed with a sacrifice fly to score the first run.

Alexander Alvarez then bunted a pitch from Balazovic toward first base. Costello's barehanded attempt to grab and throw to the plate missed to score the tying run. Chalmers, a Georgia native, was called in relief after Balazovic struck out Luis Aviles Jr.

"Jordan pitched a great game, so I was really trying to keep those runs off the board for him and the team," said Chalmers on inheriting a situation with runners on second and third. "I just went out there and tried to throw strikes. I trusted my stuff and tried to make them put the ball in play."

He got a ground out to end the inning. He allowed just two base runners, both on walks, through the eighth inning.

"The nerves get to going a little bit when you see the fans, see the hitters, but then you really just have to trust yourself and trust your stuff and fill up the (strike) zone as much as I could," Chalmers said.

The Blue Wahoos regained the lead in the bottom of the fifth when Travis Blankenhorn delivered a clutch, two-out single to score Royce Lewis, who led off the inning with a single.

From that point, pitching took over on both sides. In the ninth inning, Vizcaya took the mound, gave up a one-out single, but then struck out the final two batters to end the game.

"I really trusted him," Borrego said. "Like I said to my players, it's not done yet. We have to go one game at a time. But that was a pretty nice game all around."

Both newcomers said they were boosted by a crowd that stayed the entire way.

"I love pitching in front of people. It gets your heart racing a little bit," Balazovic said. "It's definitely a jump from the Florida State League to Double-A here. The fans are behind you and it really helps you."