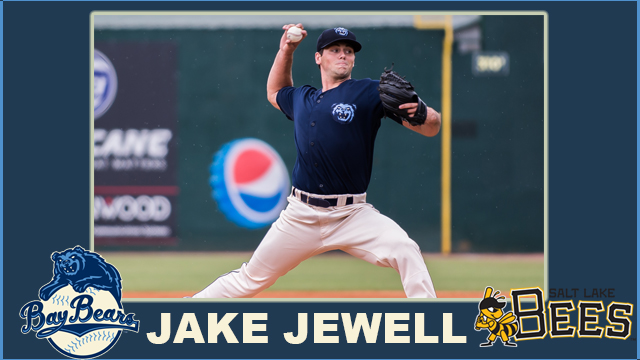 MONTGOMERY, Ala. (April 28, 2018) - The Los Angeles Angels announced Saturday that right-handed pitcher Jake Jewell has been promoted from the Double-A Mobile BayBears to Triple-A Salt Lake.

Jewell, 24, pitched in 31 games and made 23 starts with the BayBears over the past two seasons. In seven relief appearances this month, Jewell went 1-0 with a 2.08 ERA (three runs allowed in 13.0 innings) and was 2-for-2 in save situations. He only walked two batters and recorded 11 strikeouts.

Last year with Mobile, Jewell went 7-8 with a 4.84 ERA in 24 games, 23 starts, after beginning the season with Class A Advanced Inland Empire. He logged a career-high 140 2/3 innings combined between the two levels. Jewell was added to the Angels 40-man roster during the offseason.

The Norman, Okla., native was selected by the Angels in the fifth round of the 2014 MLB Draft out of Northeastern Oklahoma A&M. Jewell is currently the No. 27 prospect in the organization, according to MLB Pipeline. This is the first time he has been promoted to Triple-A in his career.

In a corresponding move, left-handed pitcher Adrian Almeida has been promoted to Mobile from Class A Advanced Inland Empire.

Almeida, 23, gave up just one earned run in 12.0 innings pitched with the 66ers to begin the 2018 season. He was selected by the Angels in the minor league portion of the 2016 Rule 5 Draft from the New York Mets.

The BayBears continue a five-game road series against the Montgomery Biscuits Saturday at 6:05 p.m. CDT. Live coverage can be seen on MiLB.tv (Montgomery feed, subscription required, promo code: BAYBEARS) and heard on the BayBears Broadcast Network, the TuneIn Radio App, and the MiLB First Pitch App, with the Countdown to First Pitch starting at 5:45 p.m. CDT.

The BayBears return home Wednesday and host a total of 70 home dates through Labor Day, September 3. Single-game tickets and ticket packages are currently on sale. Season tickets and group and hospitality offerings for the 2018 season can be reserved by calling (251) 479-BEAR (2327).