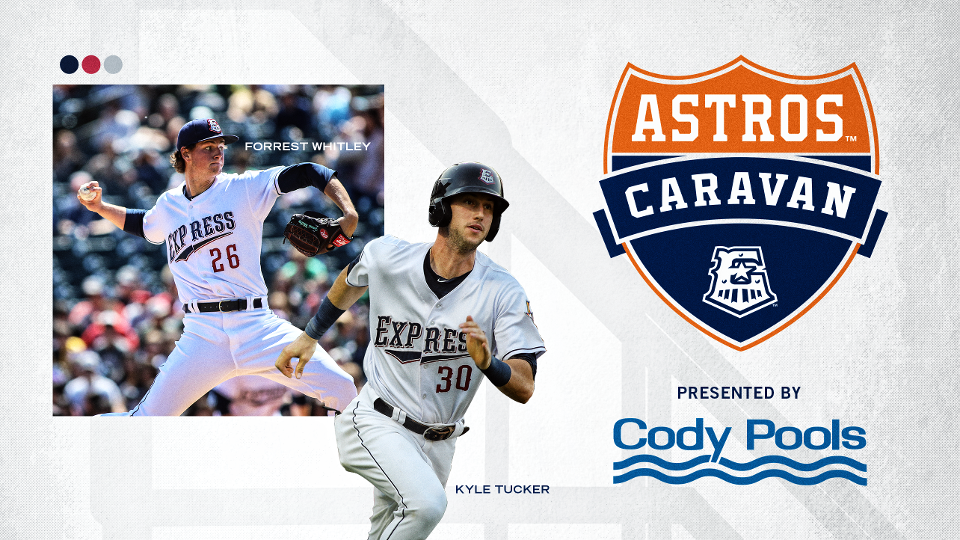 ROUND ROCK, Texas - Save the date! The Houston Astros Caravan is returning to Dell Diamond on Wednesday, January 15, presented by Cody Pools. A trio of familiar faces will be returning to Round Rock as part of the caravan, 2019 Express MVP OF Kyle Tucker , top Houston Astros prospect RHP Forrest Whitley and Express Founder Reid Ryan.

Express fans are invited to a meet and greet with the defending American League Champions from 4:00 p.m. - 6:00 p.m. at Home Run Dugout and Bullpen Bar by Dipping Springs Vodka inside Dell Diamond. Tickets for the meet and greet are available now through RRExpress.com. Tickets purchased in advance are $20 but prices will increase to $25 at the door. Admission includes free swings at Home Run Dugout with a signed wavier. There will be an autograph session for all ticketed attendees beginning at 5:00 p.m. Please note, fans will not be permitted to bring outside memorabilia to be autographed and Astros representatives are subject to change. Parking is free in the East Lot with stadium entry through the Right Field Gate.

In 2019, Tucker became the first player in Express franchise history to lead the club in home runs, RBI and stolen bases while also becoming just the fifth player in the 116-year history of the Pacific Coast League to record a 30-30 season. He set new career highs in a variety of offensive categories, including home runs (34), RBI (97), runs scored (92), total bases (257), walks (60) and games played (125).

The 22-year-old was recalled by the Astros on September 2, where he hit .269 (18-67) with six doubles, four home runs and 11 RBI in 22 games to finish the regular season. Tucker appeared in an additional nine games with Houston during the 2019 MLB Postseason, including action in the World Series. He was originally drafted fifth overall by Houston in the first round of the 2015 MLB Draft.

Whitley enters 2020 ranked as the top prospect in the Astros organization by MLB.com. He pitched for four teams within Houston's minor league system in 2019, including eight games with the Express. Whitley made his Triple-A debut on Opening Day at Dell Diamond a year ago, his first appearance at the venue since the 2016 UIL State Tournament, where he was on the mound for Alamo Heights High School in the State Semifinals when he was selected 17th overall by the Astros in the first round of the 2016 MLB Draft.

The Express kick off the 2020 season on Thursday, April 9 against the newest member of the Pacific Coast League, the Wichita Wind Surge (Miami Marlins affiliate) at 7:05 p.m. at Dell Diamond. Season memberships and flex plan ticket packages are on sale now. For more information on the Express, visit RRExpress.com or call (512) 255-2255. Keep up with the Express on Facebook, Instagram and Twitter!