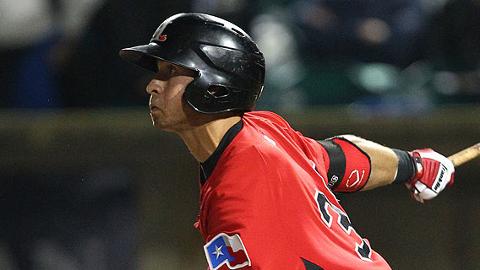 ST. PETERSBURG, Fla. -- Hickory Crawdads first baseman Joey Gallo homered three times on Friday to overtake George Springer as the top home run hitter in Minor League Baseball and added two more on Saturday to end the regular season with 40 and win the Joe Bauman Home Run Award, presented by Musco Sports Lighting. Gallo entered the last week of the season trailing Springer by four homers, but the left-hand hitting first baseman hit solo shots on Tuesday and Thursday, before hitting home runs in three of his first four at bats on Friday against Delmarva. He then hit a pair of solo homers on Saturday.

Gallo will be presented the Joe Bauman Trophy and a check for $8,000, representing $200 for each homer he hit, at the Baseball Winter Meetings™ Awards Luncheon at the Walt Disney World Swan and Dolphin Resort in Orlando, Fla., on December 9.

The Texas Rangers drafted Gallo with the 39th overall pick last year out of high school. The 19-year-old is the youngest player to win the Bauman Home Run Award in its 12-year history. Brandon Wood had been the youngest, when he hit 43 homers in 2005 at the age of 20.

Gallo hit 38 of his homers with the Crawdads in the Class A® South Atlantic League. His other two came on August 3 during a five game rehabilitation assignment with the Arizona League Rangers.

Classification leaders, provided they are not the overall winner, receive a $500 cash award. If two or more players finish with the same amount of home runs, their RBI totals will be used as the tiebreaker to determine the winner.

The other $500 cash award is still to be decided among the Short Season-A™ and Rookie® league players. Ogden teammates Justin Chigbogu and Jacob Scavuzzo are tied for the lead with 13 homers. Zach Green of Williamsport also has 13, but his season is over and he trails Chigbogu by six RBIs in the tiebreaker. Michael Ratterree (Helena), Conor Bierfeldt (Aberdeen) and Wilton Martinez (Pulaski) each have 12 home runs. Bierfeldt has two more games left, while Martinez's season is complete. Chigbogu, Scavuzzo and Ratterree play in the Pioneer League, whose regular season concludes on Sunday.

Taylor Brennan (Helena), Michael Martinez (Tri-City ValleyCats), Jacob Morris (Great Falls) and Daniel Rockett (Idaho Falls) each have 11. Martinez has a pair of games left, while the other three play in the Pioneer League.