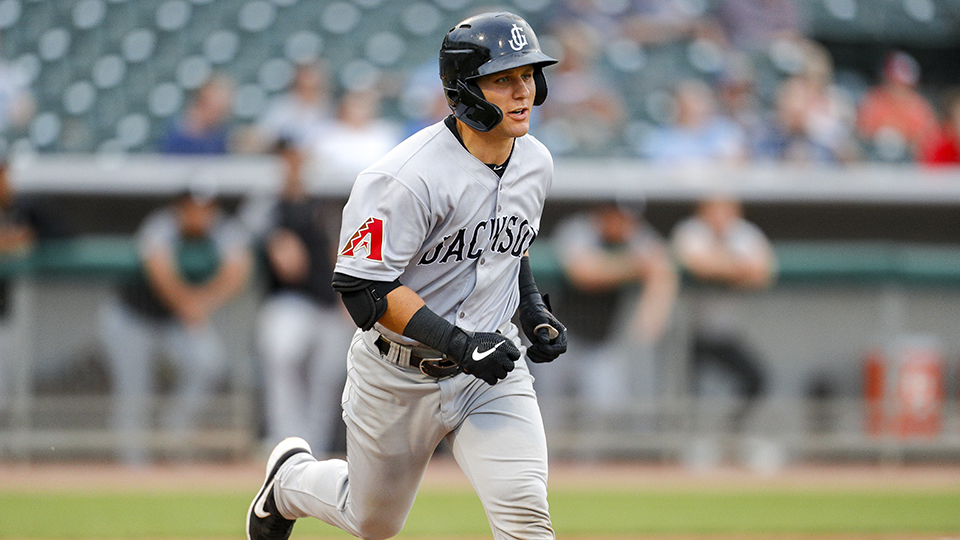 Daulton Varsho has crushed 37 home runs since being drafted in 2017. (Danny Parker/MiLB.com)

Daulton Varsho will miss time at the Premier12 tournament with an ankle injury, but it appears he's avoided serious damage.

The fifth-ranked D-backs prospect suffered a Grade 3 ankle sprain and is expected to be in a walking boot for two weeks, Arizona general manager Mike Hazen told reporters Thursday. Varsho will be re-evaluated in two weeks.

In the first game of the Super Round in Tokyo on Monday, Varsho stepped in as a pinch-hitter and ripped a double but slid into second base and rolled his ankle. He was lifted from the game and assisted off the field. The backstop had the one hit and scored twice in 10 at-bats during the tournament for Team USA.

Ranked as the No. 9 catcher in baseball, Varsho played the entire 2019 campaign with Double-A Jackson and thrived at the plate with a .301/.370/.520 slash line with 18 homers and 47 extra-base hits. Defensively, he caught in 76 games while also playing four times in center field.

With plenty of success throughout the year, the highly touted Varsho was a Southern League All-Star and also represented Arizona at the All-Star Futures Game in Cleveland.

"I thought he caught well and continued to improve throughout the year," D-backs vice president of player development Mike Bell told MiLB.com in October. "He controlled his at-bats well, got on base, hit for power. It seemed to improve as the year went on, and to do that as a catcher in [the Southern League] says a lot. Obviously, we had him playing some center field and he played it well. So you're talking about an offensive catcher and a center fielder that has defensive skills at two premium positions on the field."