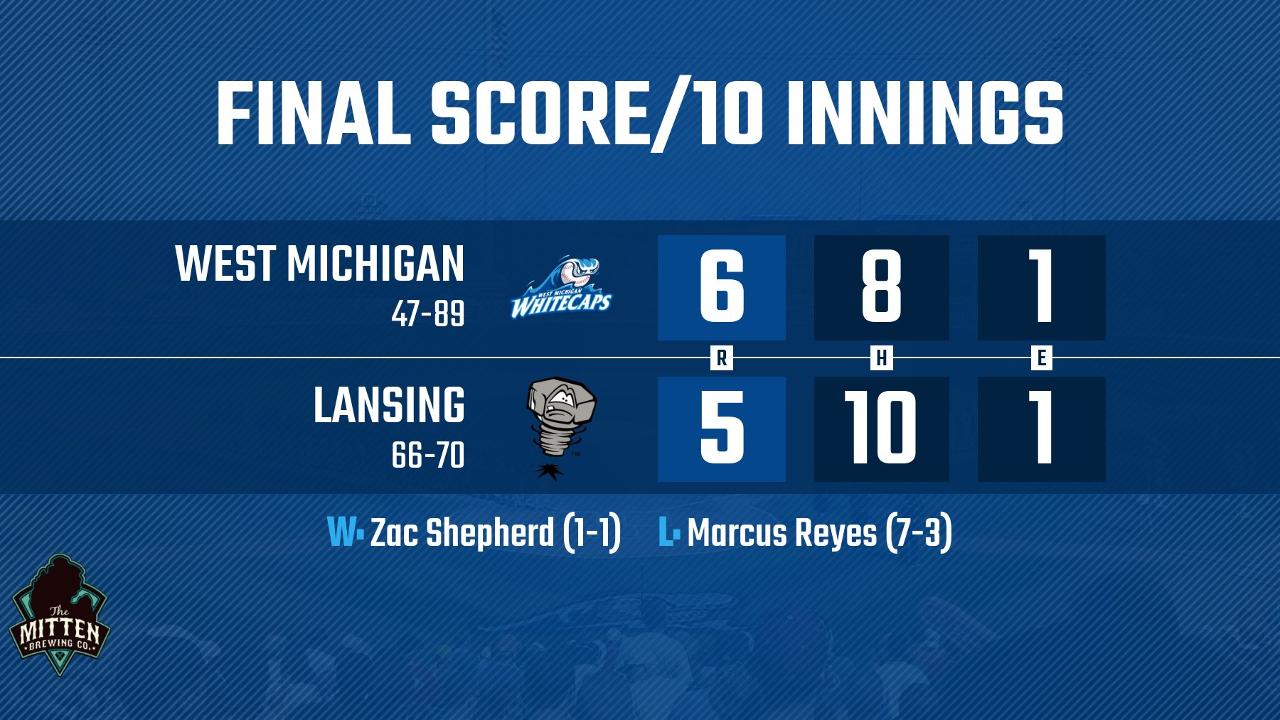 LANSING, MI - The West Michigan Whitecaps avoided a crushing loss by scoring two runs in the tenth as part of a 6-5 victory over the Lansing Lugnuts in ten innings Friday night at Cooley Law School Stadium.

The Whitecaps allowed a 4-1 lead to slip away in the final two innings of regulation before scoring the difference-making tallies in the tenth. The win snaps a four-game losing streak as the club heads to Dayton for a three-game series against the Dragons to finish the season. The victory eliminates the Lugnuts from playoff contention and guarantees the South Bend Cubs a spot in the 2019 Midwest League Postseason.

The contest began with the Lugnuts loading the bases on the first three pitches of the opening inning. Starting pitcher Maddux Conger allowed a double, single and hit batsman before bouncing back to strike out the next two hitters he faced. Rafael Lantigua worked a 2-2 count before Conger left the game with an undisclosed injury. Reliever Yaya Chentouf stepped in to throw four quality innings to keep West Michigan competitive, while Danny Reyes blooped an RBI-double to give the 'Caps a 1-0 lead. In the fourth, outfielder Dayton Dugas lost a pop up in the evening sky that fell in for a run-scoring double by Johnny Aiello to even the game at one. In the eighth, West Michigan scored three times in a frame highlighted by a two-run single from Cooper Johnson to take a 4-1 lead. After a run in the eighth, Lansing tied the game with two outs in the ninth on a two-run Gabriel Moreno single to even the game at four. In the tenth, Andre Lipcius blooped an RBI-single to give the 'Caps a 5-4 lead and scored later in the frame on a wild pitch before the bullpen held the lead in a 6-5 win over Lansing.

Zac Shepherd (1-1) tossed 1.1 impressive frames in collecting his first win as a Whitecaps pitcher, while Lugnuts lefty Marcus Reyes (7-3) gave up the two tenth inning runs in taking his third loss of the year. West Michigan's record improves to 47-89 overall in 2019 and 26-41 in the Midwest League's second-half standings. Lansing improved to 66-70 and 34-33 in the back half of the 2019 season. Lipcius went 2-or-4 with three runs scored and an RBI in the victory.

The Whitecaps finish the season with a three-game series against the Dayton Dragons on the road at Fifth Third Field beginning Saturday at 7:09 pm. Sandel De La Cruz starts for West Michigan against Dayton pitcher Jordan Johnson. Broadcast coverage with Dan Hasty begins on the Whitecaps Baseball Network at 6:55 pm. Tickets are available for any Whitecaps 2020 home contest by calling the Whitecaps front office at 616-784-4131 or by visiting www.whitecapsbaseball.com.