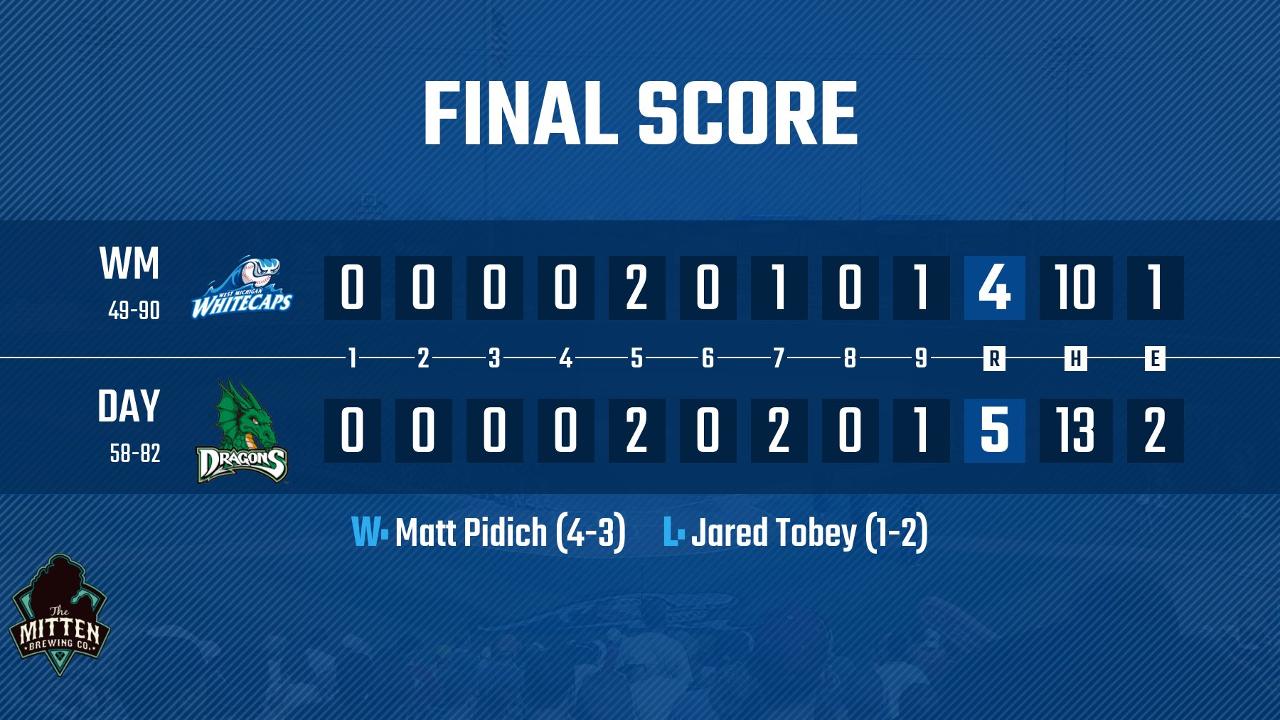 DAYTON, OH - The West Michigan Whitecaps were denied a season-best four-game winning streak as part of a 5-4 walk-off loss to the Dayton Dragons in front of 8,170 fans Monday afternoon at Fifth Third Field.

On a sunny Labor Day afternoon, Ernesto Liberatore's game-winning RBI-single in the ninth helped the Dayton Dragons deliver in walk-off fashion. The Whitecaps battled throughout the ballgame but still managed to win the three-game set as West Michigan either tied or won five of their last six series of the 2019 season.

A back-and-forth battle saw the 'Caps strike first when Danny Reyes blasted his fourth homer of the season in the fifth - a two-run shot to give West Michigan a 2-0 lead. The Dragons answered back with a pair of their own in the bottom of the frame, as Morgan Lofstrom's game-tying RBI-single evened the score at two. In the seventh, Andre Lipcius gave the Whitecaps their second lead of the game with an RBI-single to score Riley Greene and take a 3-2 advantage. Again, Dayton rallied in the bottom of the frame as Jay Schuyler ripped a two-run double into the left-field corner to help the Dragons take a 4-3 lead. In the ninth, Greene gave West Michigan the tying run with a sacrifice fly to tie the game at four. Liberatore answered by lining a 3-1 pitch into left field with the bases loaded for Matt Lloyd to score the winning run from third base to give the Dragons a victory to close the 2019 season.

Dayton closer Matt Pidich (4-3) allowed a run in two innings in collecting his fourth and final victory of the year. Whitecaps lefty Jared Tobey (1-2) allowed the winning run to score in suffering his second and last 'Caps defeat of 2019. West Michigan finishes the 2019 season with an overall record of 49-90 and 28-42 in the Midwest League's second-half standings, while Dayton finishes the year at 58-82 and 30-40 in the back half of 2019. Greene finished the contest with a 2-for-4 performance, while Lipcius and Dayton Dugas each contributed two hits apiece. The Whitecaps finished the season a franchise-record of 90 losses, but when 11-9 in their last 20 games.

The Whitecaps have concluded the 2019 season and look forward to another summer of baseball in West Michigan in 2020. Tickets are available for any Whitecaps 2020 home contest by calling the Whitecaps front office at 616-784-4131 or by visiting www.whitecapsbaseball.com.