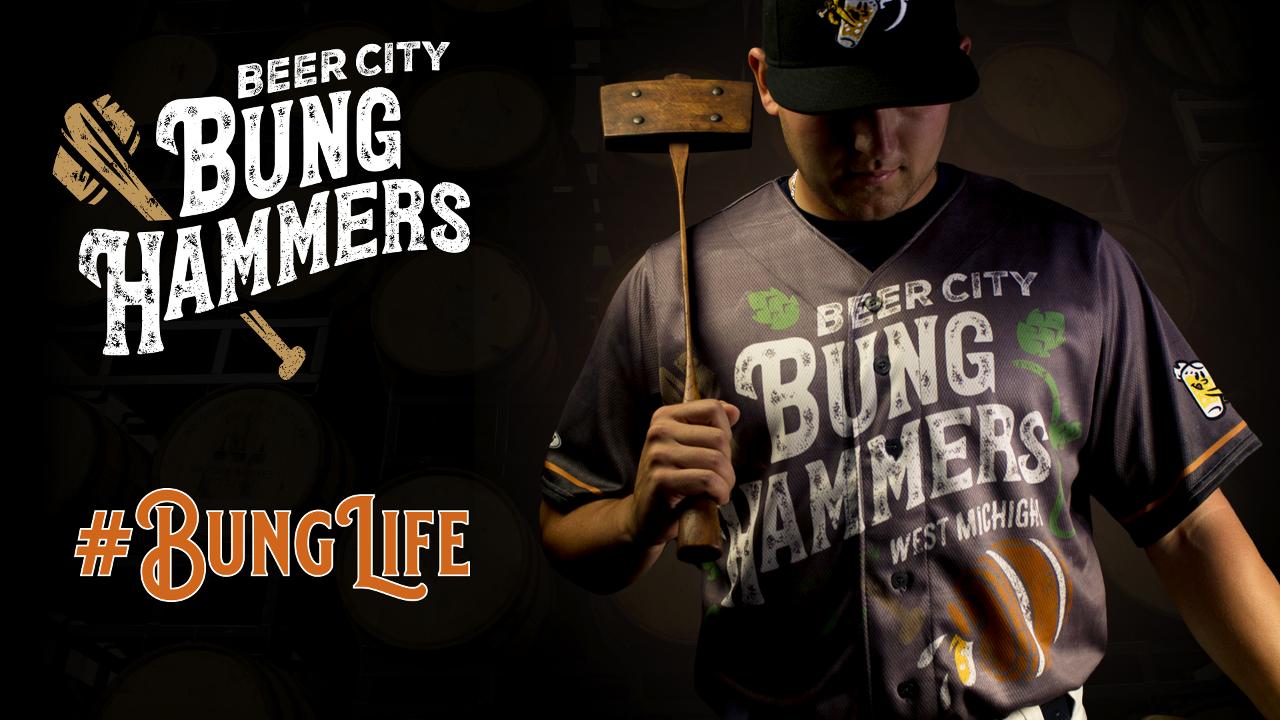 Comstock Park, MI - Fans of the West Michigan Whitecaps, the Single-A affiliate of the Detroit Tigers, know that the team has embraced Grand Rapids' thriving craft beer culture. From a special logo for the 2014 Midwest League All-Star game logo, to our "Craft Clubhouse" presented by Founders, to the annual Michigan Brewer's Guild Winter Beer Festival held at Fifth Third Ballpark every February, the Whitecaps love craft beer. Now the Whitecaps are taking the next step with the local craft beer community and changing the team's name for one special night.

On Saturday, August 4th, the Whitecaps will become the Beer City Bung Hammers for "Salute to Beer City Night." The team will wear special Bung Hammers uniforms for the game.

"We think the fans will love this alternate identity," said Whitecaps Vice President of Sales Steve McCarthy. "It's the first time we've changed our team name for a game, and tying into the West Michigan craft beer scene is a natural association for us. A bung hammer is an important tool in the barrel aging of beer, and the use of the hammer looks a lot like the swing of a bat!"

Barrel aging beer involves using old wooden whiskey barrels. The wood barrel and the whiskey it once contained influence the flavor and complexity of the beer in a way that stainless steel tanks can't. Eight of the current top 10 Michigan beers on beer rating site beeradvocate.com are barrel-aged.

The Grand Rapids area is home to more than 80 breweries and was named as having the Best Beer Scene in America by USA Today's 10best.com in 2016 and 2017 for its "stellar selections of established and up-and-coming breweries, beer bars, brewpubs, beer festivals and even thriving homebrew communities where novice brewers can get their foot in the door."

A nationwide poll run by the Great American Beer Festival named Grand Rapids "Beer City USA" two years in a row (2012-2013) before the poll was officially retired, stating "It's a measure of the community spirit and support for beer businesses, whether at the retail, distribution or brewery level."

Bung Hammers replica jerseys, caps, t-shirts, pint glasses and bungs are on sale now at BungHammers.com and at Fifth Third Ballpark. The CapSized Shop is open Monday through Friday from 10:00 am to 6:00 pm (and opens on home game day Saturdays at 10:00 am) as well as during all home games.

Fans are encouraged to visit www.BungHammers.com and to share their Beer City pride on social media using the hashtag #BungLife.