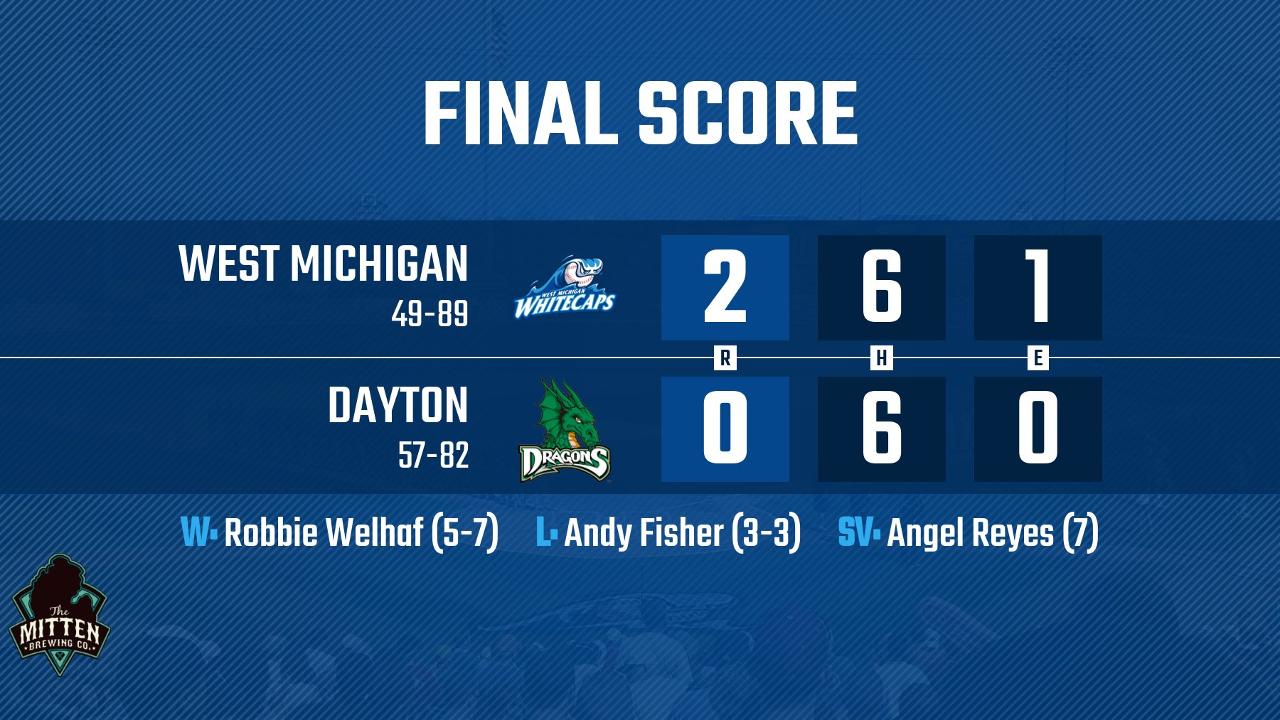 DAYTON, OH - The West Michigan Whitecaps notched their third-straight road victory in defeating the Dayton Dragons by a score of 2-0 Sunday afternoon in front of 9,387 fans at Fifth Third Field.

The victory was punctuated by a terrific performance by the pitching staff and starter Robbie Welhaf, who tossed six scoreless innings while tying a career-high with nine strikeouts. At the plate, home runs by Danny Reyes and Riley Greene punctuated the offensive highlights.

The game turned into a classic duel between pitching staffs, as Welhaf battled Dayton starter Eduardo Salazar through the early innings. In the fifth inning of a scoreless tie, catcher Sam McMillan made a diving catch a bunt popped up behind the plate with runners at first and second and nobody out. The play neutralized the threat and preserved the 0-0 score. In the seventh, Reyes blasted a solo home run over the left-field wall to give the contest its first run and 'Caps a 1-0 lead. In the ninth, Greene added much-needed insurance with a solo blast - his second homer of the season and first to leave the field of play. The homer began the frame and extended the West Michigan lead to 2-0, ending the scoring in the contest. Meanwhile, the Whitecaps bullpen was outstanding, tossing three scoreless innings after Welhaf departed the ballgame to finish their seventh shutout of the season.

Welhaf (5-7) delivered six scoreless innings and tied his career-high with nine strikeouts to close his season with his fifth win of the year. Dragons lefty Andy Fisher (3-3) gave up both 'Caps runs in relief in suffering his third defeat of 2019. Angel Reyes pitched a scoreless ninth to collect his seventh save of the season. West Michigan's record improves to 49-89 overall in 2019 and 28-41 in the Midwest League's second-half standings, while Dayton falls to 57-82 and 29-39 in the back half of the 2019 season. A win for West Michigan in its season finale on Monday afternoon against the Dragons would give the 'Caps 50 wins to finish their season, avoid their first 90-loss season in team history, and give them a season-long four-game winning streak to finish the 2019 campaign.

The Whitecaps conclude the 2019 season with a Monday matinee against the Dayton Dragons at Fifth Third Field Monday at 2:00 pm. Lefty Robert Klinchock starts for West Michigan against former Whitecaps righty and Dragons hurler Clate Schmidt. Broadcast coverage with Dan Hasty begins on the Whitecaps Baseball Network at 1:50 pm. Tickets are available for any Whitecaps 2020 home contest by calling the Whitecaps front office at 616-784-4131 or by visiting www.whitecapsbaseball.com.