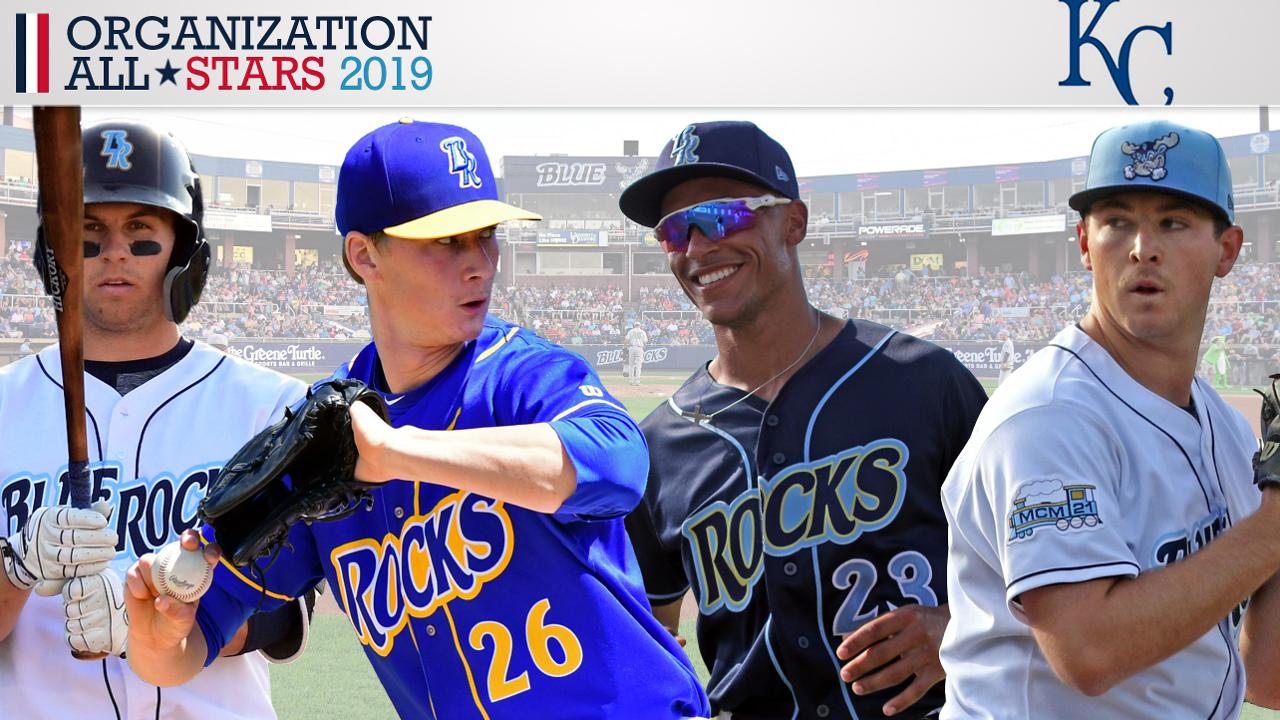 Wilmington, DE -- After a memorable 2019 campaign which saw the Wilmington Blue Rocks win their first Mills Cup Championship in two decades, a quartet of Rocks who played vital roles in the team's success were named MiLB Organizational All-Stars. Pitchers Kris Bubic and Brady Singer and outfielders Michael Gigliotti and Brewer Hicklen were honored due to their standout performances.

Bubic was selected 40th overall in the 2018 Draft by the Kansas City Royals out of Stanford and became one of the best pitching prospects in all of MiLB. Between Low-A Lexington and Wilmington, the southpaw paced all pitchers with 185 strikeouts thanks to compiling eight or more strikeouts in half of his 26 total starts. The lefty also represented the Royals in the Sirius-XM Futures Game. Named a postseason All-Star in the Carolina League, Bubic posted a 7-4 record with a 2.30 ERA in 17 starts with the Rocks. He racked up 110 strikeouts and walked just 27 in 101.2 innings of work and played an integral role in the Blue Rocks postseason run. Overall between the two levels, Bubic held opponents to a .199 batting average and had a 0.97 WHIP.

Like Bubic, Singer also was on the American League roster for the Sirius-XM Futures game, but finished his year in Double-A Northwest Arkansas. As Kansas City's first pick in last year's draft and 18th overall, Singer impressed in his much anticipated pro debut in Wilmington. With the Blue Crew, the second-best prospect in the system went 5-2 with a sterling 1.87 ERA in 10 starts and closed out his tenure on the Riverfront tossing three scoreless outings in his final three starts before being promoted. With his dominant performance, Singer was named a mid-season Carolina League All-Star. In Double-A, Singer overcame some early struggles adjusting to the higher competition and proved to be one of the best pitchers in the Texas League, posting a 3.47 ERA in 16 starts.

Gigliotti had a tremendous bounce back season after missing nearly all of 2018 due to an ACL injury. Starting the 2019 campaign in Low-A Lexington, Gigliotti showed why the Royals drafted him out of Lipscomb in the fourth round of the 2017 Draft. The outfielder was one of the best players in the South Atlantic League and with the Legends posted a .309 batting average and had an OPS of .805 in 59 games before being promoted to Wilmington. At the time of his promotion, Gigliotti led the SAL with 29 stolen bases. With the Rocks, Gigliotti was limited due to an injury that forced him to miss a month of the season. Making the jump to Advanced-A, the 12th-ranked prospect in the system hit .184 in 24 games and stole five bases.

With the combo of power and speed, Hicklen was one of Wilmington's most consistent hitters during the championship season. In his first full season with the Blue Crew, the seventh round pick by the Royals in 2017 out of Alabama-Birmingham was top-ten in the Carolina League in batting average, slugging percentage, on-base percentage, OPS, triples, runs scored, walks and stolen bases. He finished the year leading the Rocks with a .263 batting average, team-leading 14 home runs and drove in 51 runs while stealing a career-high 39 bases.