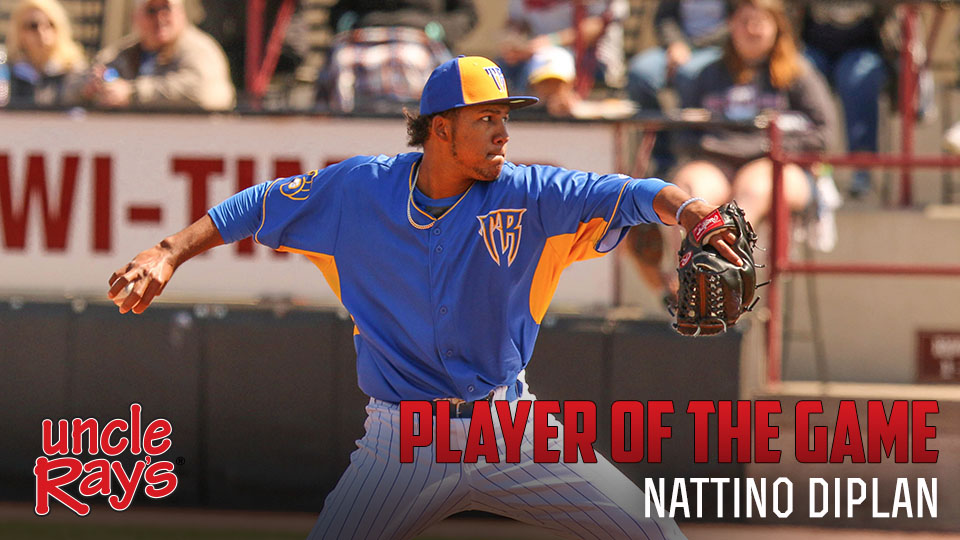 GRAND CHUTE, WI - The Wisconsin Timber Rattlers ended their seven-game losing streak with a 2-0 win over the Beloit Snappers behind a terrific pitching performance by Nattino Diplan on Sunday afternoon at Neuroscience Group Field at Fox Cities Stadium. Diplan allowed two hits, walked one, and struck out seven to earn his second win of the season. The victory allowed the Rattlers to get a split on the day after Beloit had won the completion of Saturday's suspended game 4-3 in thirteen innings earlier on Sunday.

Wisconsin (24-30) took the lead in the top of the second as they loaded the bases with one out in the bottom of the second inning. Trey York drove in the go-ahead run with a fielder's choice on a force play at second.

Demi Orimoloye tripled to start the Rattlers half of the third. Joantgel Segovia knocked in Orimoloye with a sacrifice fly for a 2-0 lead. That would be enough for Diplan.

The Snappers (29-27) had their best chance to score against Diplan in the bottom of the third inning. Eric Marinez, who had three hits in this game, singled to start the inning. Diplan walked Collin Theroux and threw a wild pitch to allow Beloit runners on second and third with no outs and the Rattlers lead at one run. However, Diplan struck out the next two batters and got the final out on a grounder to third.

Diplan, who snapped a personal four-game losing streak with the win, used just 64 pitches to work his six innings.

David Burkhalter relieved Diplan to start the seventh inning and quickly retired the first two batters he faced. But, it would not be that easy for Wisconsin to end their losing streak. Pinch hitter Trace Loehr, who knocked in the go-ahead run in the thirteenth inning of game one, extended the game with a single. He would take second on defensive indifference and third when Marinez singled off the glove of Burkhalter. Then, Marinez stole second and suddenly, the Snappers had the tying runs in scoring position.

Burkhalter regrouped and struck out Theroux swinging to end the game and pick up the save for the Rattlers.

The Timber Rattlers are off on Monday. They return to action on Tuesday with a home game against the Quad Cities River Bandits. Victor Diaz (0-1, 6.75) is the scheduled starting pitcher for Wisconsin. Game time is 7:05pm.

Join Minor League Baseball and the American Cancer Society on Monday in covering your bases with the Sun Safety Initiative. Bullfrog sunscreen samples will be available to fans.

The first 1,000 fans to attend this game will receive a poster of Timber Rattlers infielder Tucker Neuhaus courtesy of Brew Pub Pizza.

Show your business card when you purchase a ticket and for $14.50 you will receive a box seat ticket, a beverage and your choice of brat or hot dog. The offer is also available to senior citizens (55 & older) and military personnel courtesy of Baker Tilly, WVBO, and AM1280 WNAM.

If you can't make it to the ballpark for the Timber Rattlers game, there are several ways to catch the action. The radio broadcast is on AM1280, WNAM starting with the Potawatomi Hotel & Casino Pregame Show at 6:45pm. The broadcast is also available on TuneIn Radio, IHeartRadio, and MiLB.tv.