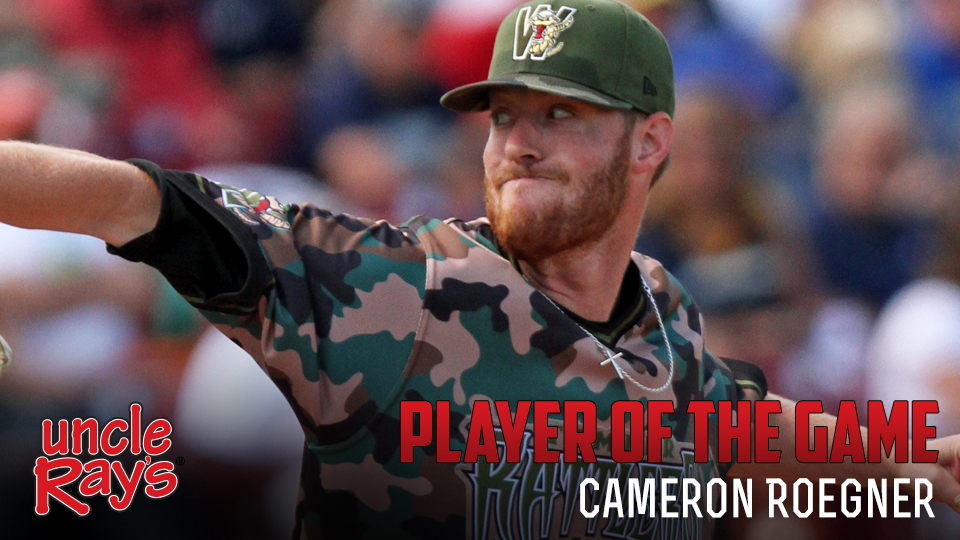 GRAND CHUTE, WI - The Wisconsin Timber Rattlers edged the Kane County Cougars 3-2 on Sunday afternoon at Neuroscience Group Field at Fox Cities Stadium. The win was the second straight for the Timber Rattlers and allowed them to earn a split in the four-game series to open the second half of the Midwest League season.

Ronnie Gideon put the Timber Rattlers (28-44 overall, 2-2 second half) up 1-0 in the second inning with a leadoff home run. The high, towering drive to right field was the seventh homer of the season for Gideon. Wisconsin added to their lead later in the inning when Jonathan Villar drove in Nathan Rodriguez with a sacrifice fly.

Kane County (41-30, 2-2) rallied to tie the game in the top of the fourth inning. Ben DeLuzio started the inning with a single. Luis Silverio was next and he tripled to right to get DeLuzio home. Marcus Wilson was next and he drew a walk to put runners on the corners. Wisconsin starting pitcher Braden Webb walked the next batter and got Mark Karaviotis to ground into a 6-4-3 double play. The twin killing allowed Silverio to score the tying run, but it effectively ended the threat as Webb struck out the next batter.

The Cougars had a bigger threat going in the top of the fifth inning as Webb committed an error to let the leadoff batter reach. Then, Webb hit the next batter and walked the batter after that to load the bases with no outs. But, Webb escaped with the game still tied by getting a strikeout and a 6-4-3 double play.

Wisconsin took the lead in the bottom of the fifth. Ryan Aguilar drew a leadoff walk and Villar followed with a single. Mario Feliciano sent a chopper to short that turned into a force at second, but Feliciano denied the Cougars a double play by beating the throw to first. Ryan Braun put the Rattlers ahead with a sacrifice fly to center that scored Aguilar.

Cameron Roegner took over for Webb to start the top of the sixth and he shut down the Cougars with four perfect innings. Villar helped out with defensive gems to rob Kane County of leadoff hits in the sixth and seventh inning and that was enough for Roegner to nail down his first professional save.

Braun and Villar concluded their rehabilitation assignments with the Timber Rattlers on Sunday. Braun went 2-for-8 with a home run, two walks, and two RBI in three games with Wisconsin. Villar was 8-for-13 with six RBI in four games as a Timber Rattler. Both are expected to rejoin the Milwaukee Brewers on Monday to open a series at Cincinnati against the Reds.

The Timber Rattlers will welcome the Quad Cities River Bandits to town for game one of a four-game series on Monday night. Jordan Desguin (4-3, 6.07) is the scheduled starting pitcher for the Timber Rattlers. Quad Cities has listed Cionel Perez (4-3, 4.39) as their starter. Game time is 7:05pm.

Monday is a Thrivent Financial Make-A-Difference Monday and the featured non-profit is Center for Veterans Issues, LLC. Fans who choose to donate items like pre-packaged snacks, canned goods, and/or personal hygiene items will receive a discounted box seat ticket for $10 (normally $14) to this game. Additionally, $5 of the $10 for the ticket will be donated to Center for Veterans Issues.

It was rained out on June 12, so the first 1,000 fans to attend this game will receive a poster of Timber Rattlers pitcher Thomas Jankins courtesy of Brew Pub Pizza.

A Qdoba Q*Monday means that if you purchase an entrée at any Qdoba location in Appleton, Neenah, or Oshkosh for lunch on Monday and receive a ticket to any Monday home game during the 2017 season courtesy of Qdoba and NASH-FM.

Teenagers may purchase a reserved seat for $4 or a $10 ticket that includes four of the following five food and beverage items: Hotdog, 10-ounce soda, Nachos with Cheese, Small Popcorn, and Cotton Candy. Teen Night presented by Fox Valley Technical College is for every Monday night home game during this season.

If you can't make it to the ballpark, there are several ways to catch the action. The radio broadcast is on AM1280, WNAM starting with the Potawatomi Hotel & Casino Pregame Show at 6:45pm. The broadcast is also available on TuneIn Radio, IHeartRadio, and MiLB.tv. Thursday's game will also be broadcast on Spectrum Sports starting at 7:00pm.