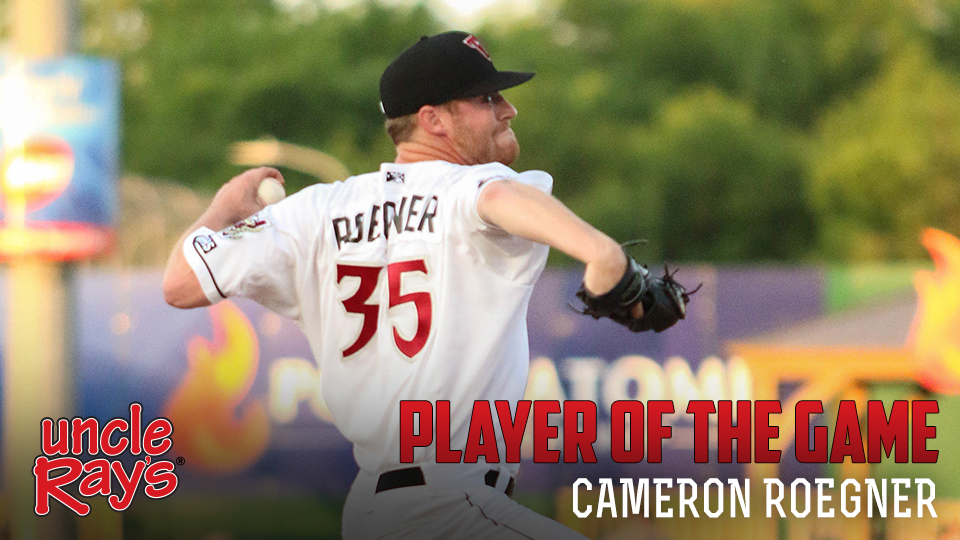 GRAND CHUTE, WI - The Wisconsin Timber Rattlers refused to let this one get away from them. Monte Harrison scored on a throwing error in the bottom of the ninth inning to give the Rattlers a 3-2 win over the Kane County Cougars on Friday night at Neuroscience Group Field at Fox Cities Stadium.

Kane County (32-27) scored in the top of the third to take a 1-0 lead. Manny Jefferson drew a leadoff walk and stole second with one out. Adam Walton sent Jefferson home with a single to left.

Wisconsin (26-32) broke in front in the bottom of the fourth. The Jose Cuas reached on a fielder's choice when the Cougars couldn't complete what would have been an inning-ending double play. Ronnie Gideon made the Cougars pay by blasting a two-run homer to left-center. Gideon, who has homered in two straight games, has five home runs this season.

Rattlers starting pitcher Cameron Roegner tossed six scoreless innings before leaving the game. He pitched around four hits and three walks with five strikeouts and was in line for his fifth win of the season.

Cougars starter Jon Duplantier, who was 6-0 with a 0.74 ERA going into the game, only allowed the two-run homer to Gideon, but was in line to take his first loss of the season when he left after six innings.

The Cougars rallied to tie the game in the top of the seventh inning with an unearned run against Braden Webb. Manny Jefferson reached on an error to start the inning and was at second base with two outs. Then, Luis Silverio laced a double to right-center and Jefferson raced home with the tying run.

Wisconsin's bats went down in order against Kane County reliever Wei-Chieh Huang in the seventh and eighth inning. But, Webb responded by setting down the Kane County hitters in order in the eighth and ninth.

The game-winning rally started when Harrison was hit by a pitch to start the ninth. Gilbert Lara came to the plate with the intention of bunting Harrison into scoring position, but Huang's first pitch to Lara was up and in and went to the backstop.

Lara sent the next pitch to medium right field and it was deep enough for Harrison to tag up and head for third after the catch. Silverio made the catch, but his throw to third sailed over the head of the third baseman, skipped past Huang, who was backing up the play, and bounced into the stands to allow Harrison to trot home with the winning run.

The first 1,000 fans to attend this game will receive a Harry Potter-themed scarf courtesy of Neuroscience Group as part of Harry Potter Night at the ballpark.

Meet your favorite characters from the books. There will live owls, butter beer samples, and a larger-than-life Harry Potter book. Take photos at all six picture opportunities for a chance to win Beats headphones or a Fitbit.

Saturday is also the annual Strike Our Stroke Night with the Rattlers and Neuroscience Group. The ThedaStar helicopter will deliver Timber Rattlers mascot Fang and the game ball for the first pitch. Plus, there will be a mid-game survivor celebration with the stories of two stroke survivors.

Oshkosh Corporation presents the postgame fireworks celebration tomorrow night. After the fireworks, children 14 and under may run the bases courtesy of Tundraland.

If you can't make it to the ballpark for the game, there are several ways to catch the action. The radio broadcast is on AM1280, WNAM starting with the Potawatomi Hotel & Casino Pregame Show at 6:15pm. The broadcast is also available on TuneIn Radio, IHeartRadio, and MiLB.tv.