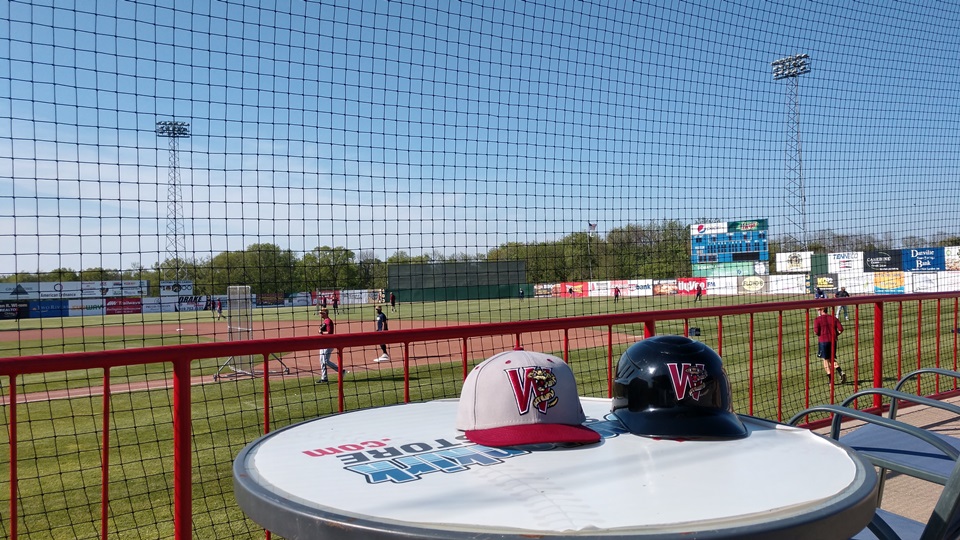 BURLINGTON, IA - The night looked bleak for the Wisconsin Timber Rattlers at Community Field on Friday night. They trailed the Burlington Bees 9-1 and had generated almost no offense in the first seven innings of the evening. But, Wisconsin flipped a switch in the last two innings to stage an incredible comeback to defeat the Bees 14-9. Je'Von Ward drove in four runs in the final two innings as every Rattler had a piece of the rally to victory.

Burlington (24-17) took the lead with a two-out rally in the bottom of the first inning. Wisconsin starting pitcher Reese Olson hit Nonie Williams to put a runner on first with two outs. Spencer Griffin followed with a double to right and Williams scored for a 1-0 lead.

The Bees added to their lead in the bottom of the second as Olson uncorked a pair of run-scoring wild pitches.

Wisconsin (18-20) cut into the 3-0 deficit with a two-out RBI single by Jesús Lujano in the top of the third.

But, Burlington pushed their lead to 7-1 as they took advantage of several Rattlers miscues in the bottom of the third. Back-to-back singles started the inning and put runners on the corners. A passed ball against David Fry let in the runner from third.

Two walks with a flyout to right sandwiched between them loaded the bases for the Bees and Justin Jones singled to drive in a run.

Olson probably should have been out of the inning on the next ball in play, but a grounder to short for what could have been an inning-ending double play went under the glove of Brice Turang and two runs scored. That knocked Olson out of the game.

Wilfred Salaman took over for Olson and got the final two outs in the third. He retired the first two batters in the bottom of the fourth, but gave up a triple to Griffin and an RBI double to DC Arendas before getting the final out of the frame and the Bees were up 8-1.

Kevin Arias hit a two-out solo home run in the bottom of the fifth inning for the Bees and they were up 9-1.

Burlington got two runners on after two outs in the bottom of the sixth inning, but Yohandry Perez relieved Salaman and got the final out of the inning to keep the Bees off the scoreboard in the inning.

The game remained 9-1 until the Rattlers had a huge rally in the top of the eighth inning against relievers Cole Duensing and Tyler Smith.

Perez walked the lead-off batter in the bottom of the eighth inning and that was all for him. Chad Whitmer came out of the Wisconsin bullpen and retired the next three batters to keep the Rattlers within a run.

The top of the ninth started with Lujano drawing a walk and Yeison Coca following with a single. David Fry was next and he grounded a single through the left side of the infield to score Lujano with the run to tie the score 9-9.

McClanahan grounded into a force out at second, but McVey drew another walk to reload the bases for Ward.

Ward jumped on the first pitch from Smith and lined the ball into the gap in right-center. All three runners scored as Ward sailed into third with a three-run triple and the Rattlers had come all the way back to take a 12-9 lead.

Piñero added an insurance run with a sacrifice fly to right. The Rattlers added one more run in the ninth on an RBI single by Lujano, his third hit of the night.

Whitmer went back out for the bottom of the ninth with a 14-9 lead and struck out the Bees in order to close out the amazing comeback.

Wisconsin had one run on four hits over the first seven innings of the game. They scored thirteen runs on nine hits over the last two innings.

In contrast, the Bees had nine runs on ten hits through the first five innings. Burlington had one hit over the final four innings.

This was the biggest comeback for the Timber Rattlers since they became a Milwaukee Brewers affiliate for the 2009 season. The largest deficit the Rattlers have rallied from as a Brewers affiliate had been six and they had done it twice before. They rallied to win 7-6 in ten innings over Peoria at home after trailing 6-0 on April 22, 2017 and to win 10-8 in ten innings at Lansing after trailing 8-2 on May 3, 2013.

The largest comeback in Timber Rattlers history happened on July 11, 2005 at Peoria. The Chiefs led Wisconsin 11-2 after the bottom of the sixth inning, but the Rattlers picked up a 12-11 win in ten innings.

Game three of the series is Saturday evening at Community Field. Scott Sunitsch (2-4, 3.03) is the scheduled starting pitcher for the Timber Rattlers. Burlington has named Kyle Tyler (1-0, 2.84) as their starter. Game time is 5:00pm. The radio broadcast is on AM1280, WNAM and the TuneIn Radio app starting with the Papa John's Pizza Pregame Show at 4:40pm.