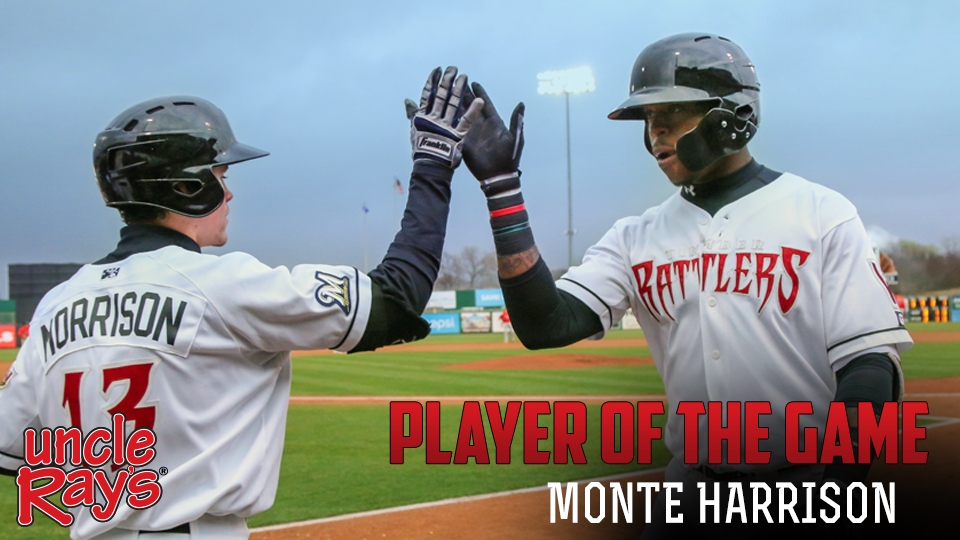 GRAND CHUTE, WI - The Wisconsin Timber Rattlers beat the Quad Cities River Bandits 8-3 on Thursday night at Neuroscience Group Field at Fox Cities Stadium. The Timber Rattlers got some solid pitching performances and a pair of solo home runs to take the final game of the three-game series with the Bandits.

Ronnie Gideon gave the Timber Rattlers (25-32) a 1-0 lead with a solo home run in the second inning. The blast was Gideon's fourth of the season, but his first at home.

The River Bandits (30-28) came back to take the lead in the top of the third.   Jonathan Arauz tripled with a runner at second to send the tying run home. Daz Cameron was next and he doubled off the wall in left-center to score Arauz and the Bandits were up 2-1.

Monte Harrison brought Wisconsin back to even in the bottom of the third inning with a long, solo home run to center with two outs. It was Harrison's ninth home run of the with season and it evened the game 2-2.

Then, Tucker Neuhaus drew a walk and moved to second on a wild pitch. Jose Cuas hit a grounder up the middle for an infield single and a wild throw to first allowed Neuhaus to score the go-ahead run.

Quad Cities used a two-out rally of their own to tie the game in the top of the fourth. Wander Franco singled to keep the inning alive. Franco raced around to third on an errant pickoff throw to first by Wisconsin starting pitcher Jordan Desguin. Marcos Almonte chopped a single through the left side of the infield to score Franco and tie the game 3-3.

The Rattlers retook the lead in the bottom of the fourth. Joantgel Segovia singled with runners on first and second to score Gilbert Lara with the go-ahead run.

Wisconsin padded their lead in the fifth inning. Harrison started the inning with a triple and Neuhaus followed with an RBI double. One out later, Gideon lined a double to left and Neuhaus scored. Gideon would score on an infield single off the bat of Nathan Rodriguez and a throwing error to give the Rattlers a 7-3 lead.

The game was halted by rain and lightning with one out in the bottom of the sixth inning. It resumed after a 56 minute delay.

Desguin did not return for the top of the seventh. He allowed three runs - two earned, walked one, and struck out five over six innings.

Parker Berberet took over for Desguin to start the seventh and allowed a pair of singles with one out. He would get out of the inning when he got Cameron to ground into a double play.

Cuas singled in the bottom of the seventh and went to second on a wild pitch. He took third on another wild pitch and scored on a throwing error to account for the final run of the game.

Berberet closed out the game with a scoreless eighth and a scoreless ninth for his third save of the season.

The Timber Rattlers continue their homestand on Friday night when they welcome the Kane County Cougars to Neuroscience Group Field at Fox Cities Stadium. Braden Webb (1-4, 5.59) is the scheduled starting pitcher for Wisconsin. Jon Duplantier (6-0, 0.74) is set to start for the Cougars. Game time is 7:05pm.

Wonder Woman and Batman heard about our Superhero Night and couldn't wait to visit! Your little Justice Leaguer will want to come out and meet them. The first 1,000 fans to enter the stadium will receive a Superhero Toothbrush Holder from Elite Smiles Dental. Arty's Old Fashioned drinks will be available to fans 21 and over for $3 on an Arty's Old Fashioned Friday with WIXX.

If you can't make it to the ballpark for the Timber Rattlers game, there are several ways to catch the action. The radio broadcast is on AM1280, WNAM starting with the Potawatomi Hotel & Casino Pregame Show at 6:45pm. The broadcast is also available on TuneIn Radio, IHeartRadio, and MiLB.tv.