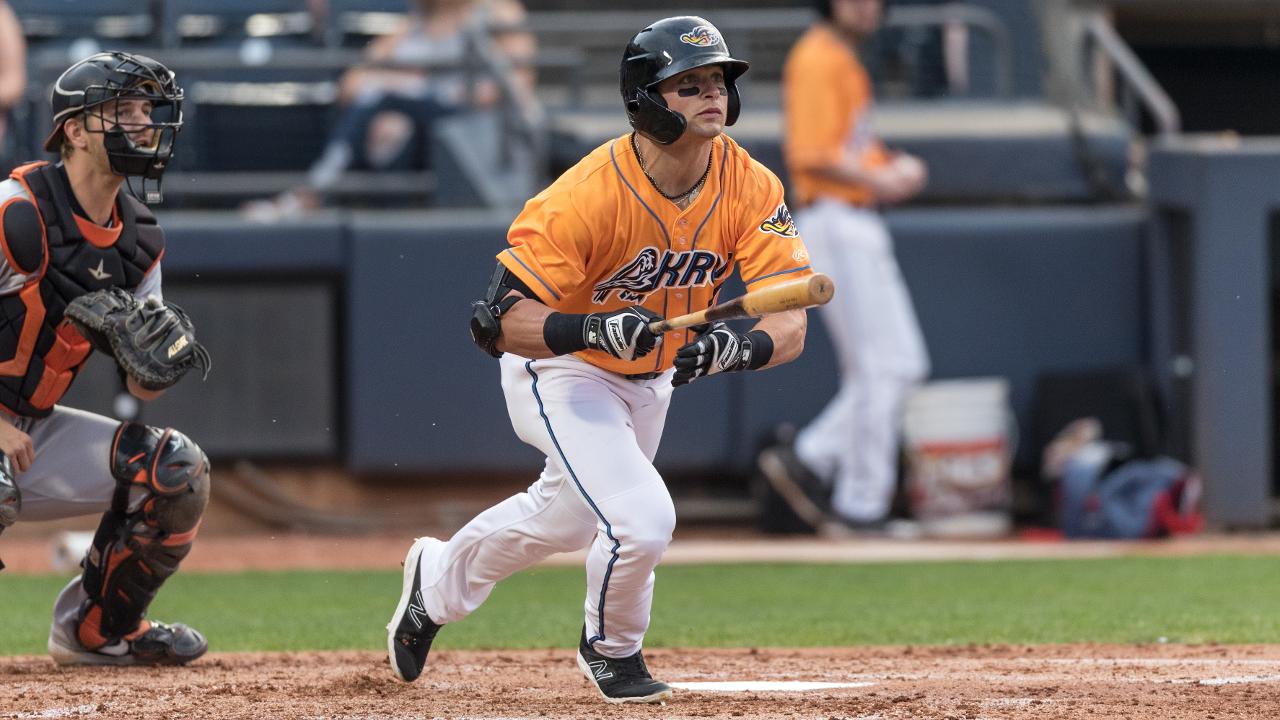 Mitch Longo had three hits including an eighth-inning home run to help the Ducks to a 7-2 victory over Altoona Tuesday. (David Monseur)

The Akron RubberDucks used a five-run third inning to blow past the Altoona Curve Tuesday night at Canal Park as the Ducks picked up the 7-2 win to snap a seven-game home losing streak.

A big third inning from Akron would break the game open after Altoona took an early 1-0 lead. Following two hits and a sacrifice fly to start the inning, the Ducks would put six straight runners on base en route to a five-run inning that gave them everything they needed to pull away from the Curve.

Altoona jumped out on early on Akron starter Jake Paulson in the first, as Mitchell Tolman's leadoff double paid off after an RBI single from Jared Oliva. Paulson would get a double play ball to end the inning and from there would start to roll, facing just one over the minimum across the next three innings. Paulson, given the lead after the huge RubberDuck third, would let the Curve tack on one more in the fifth with a pair of doubles but would still exit after the sixth with a 6-2 lead. Anthony Gose (1.0 innings), Robert Broom (2.0 IP) both pitched scoreless outings in relief to close things out.

The RubberDucks went quietly in the first and second before exploding in the third for five runs on five hits as Akron batted around. Alexis Pantoja and Connor Smith started the inning with hits before an Ernie Clement sac fly; a Ka'ai Tom triple then kicked off a string of six straight batters reaching base before Pantoja came up again and ended the frame with a double play. Connor Smith led off the fourth with another double before Clement tripled to bring him home. The RubberDucks would get one last insurance run in the eighth, when Mitch Longo smoked one over the right field fence for a solo homer and his third hit of the night.

After starting his AA career with 15 straight hitless at-bats, Connor Smith has gone 3-6 with a home run and two doubles over his last two games … The bottom of the third was the sixth time that the RubberDucks have batted around in an inning in 2019 … The win snaps a seven-game home losing streak for the Ducks that dates back to June 14, the longest such slide of the season … Mitch Longo's eighth-inning home run was Akron's Eastern League-leading 74th of the season … Time of Game: 2:56 (35 minute rain delay) … Attendance: 3,408.

The RubberDucks and Curve will meet for the final game of their series Wednesday at 7:05 at Canal Park. The game broadcast, powered by FirstEnergy, is on Fox Sports 1350 AM, the WARF iHeartRadio channel, and the TuneIn Radio App, and available on MiLB.TV. Lefty Sam Hentges (1-8, 4.97) will pitch for Akron against Altoona's Pedro Vasquez (6-1, 2.30).