Reigning Pitcher of the Week Strikes Out Twelve Over Seven Innings 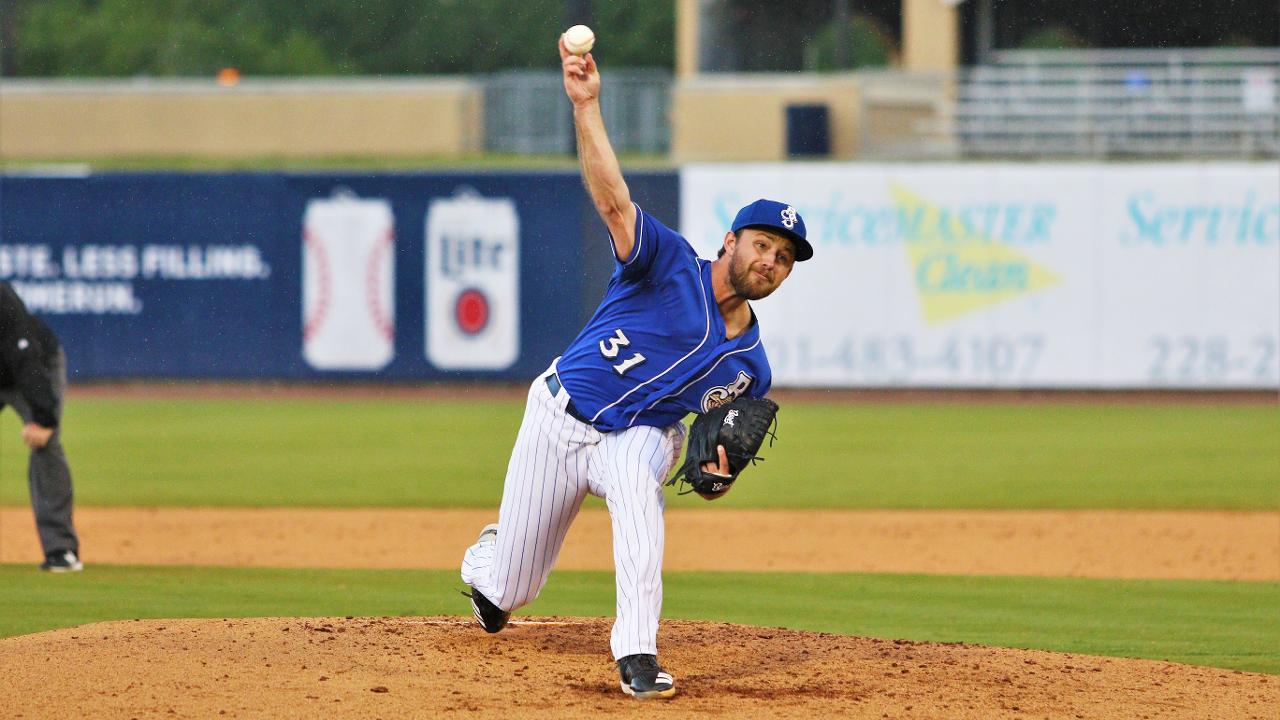 In his first start since he was named the Southern League Pitcher of the Week, RHP Alec Bettinger (W, 4-4) turned in career night for the Biloxi Shuckers (36-25), striking out a career-best 12 batters over seven innings to help the Shuckers top the Pensacola Blue Wahoos (36-25) 9-1 on Friday night at MGM Park. With the win, the Shuckers are now tied for the South Division lead with the Blue Wahoos with nine games left in the first half of the Southern League season.

Bettinger's lone mistake of the night came on his first pitch, when Travis Blankenhorn connected for an opposite-field home run, his tenth of the season, to instantly put the Blue Wahoos up 1-0. Bettinger responded by striking out two of the next three batters he faced. The Alexandria, VA native allowed just one more hit the rest of the night, a triple in the second, before retiring 16 of the final 18 Blue Wahoos that he faced. Bettinger issued his only walk of the night with two outs in the fourth and had one more Pensacola batter reach on a fielding error in the seventh before striking out the side to finish his outing. It's the third time in his last seven starts that Bettinger has pitched seven innings and it is his fifth quality start in his last six starts.

Biloxi's offense reclaimed the lead for their right-hander in the bottom of the first inning. Luis Aviles Jr. bunted his way on base, bringing up Trent Grisham, who launched on opposite-field home run, his 11th homer of the season, off Blue Wahoos LHP Bryan Sammons (L, 0-1) to put Biloxi in front 2-1. The Shuckers added on four runs in the bottom of the fourth inning on an RBI fielder's choice by Aviles, an RBI single from Grisham and a two-RBI single by Patrick Leonard.

After Bettinger departed, RHP Devin Williams worked two innings and struck out four. The only man to reach base while Williams was on the mound came on a fielding error. The 16 strikeouts by Shuckers pitching sets a new season high for strikeouts in a game by the pitching staff. Biloxi's offense added on three more runs in the bottom of the eighth thanks to a two-RBI double from Jake Gatewood and an RBI double by Leonard. Aviles, Grisham, Gatewood, Leonard and Weston Wilson all finished with multi-hit efforts in the victory.

Looking to seize their first lead in the division all season, the Shuckers square off with the Blue Wahoos again on Saturday night. Biloxi will send RHP Johan Belisario (5-0, 2.28) to the mound against Pensacola LHP Charlie Barnes (0-0, 3.60). It's Military Appreciation Night, with a military-themed Shuckers hat giveaway to the first 1,000 fans presented by Keesler Federal Credit Union. Active and retired military personnel can purchase $8 Reserved Level tickets and $10 Dugout Box Tickets. The game can be heard locally in Biloxi on Cruisin' WGCM AM 1240/100.9 FM, TuneIn Radio or the MiLB First Pitch App and can be seen on MiLB.TV. Fans can save $10 off their subscription when they use the promo code 'Shuckers' at checkout.