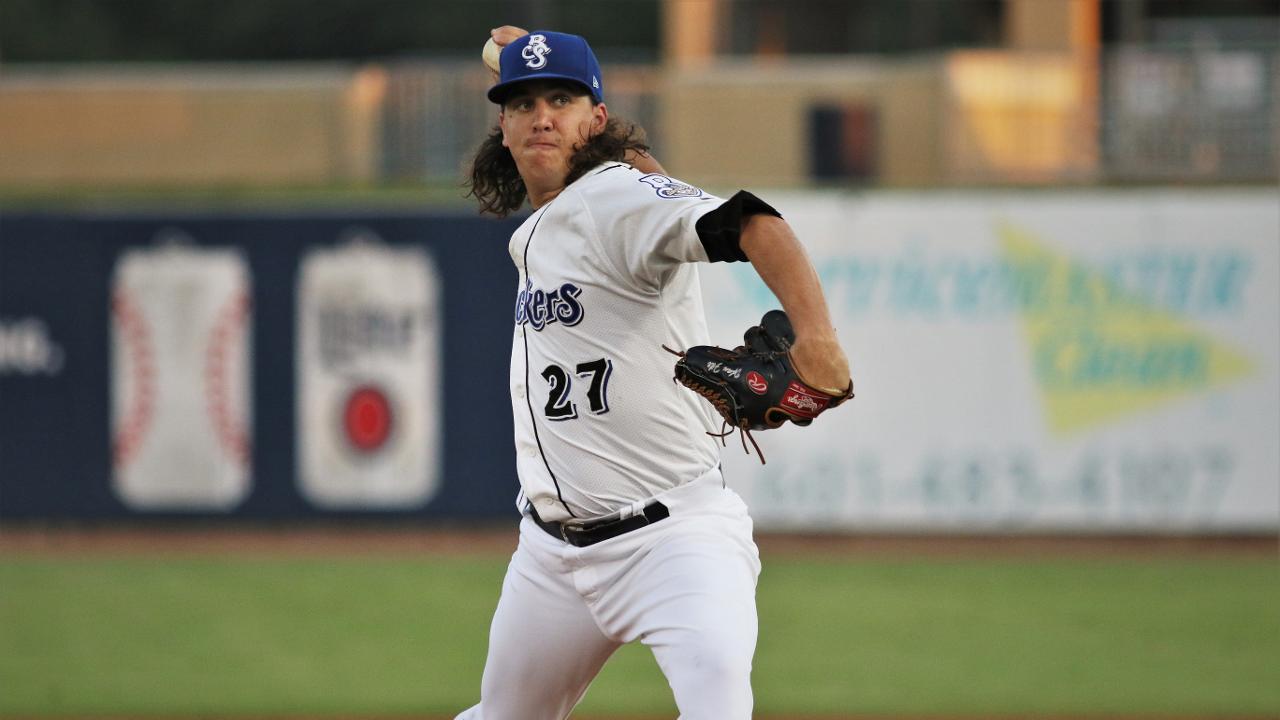 Dylan File turned in the best outing of his career in his first-ever postseason start. The right-hander tossed 8.0 scoreless innings before allowing a home run in the ninth. File departed after 8.1 innings and walked just one while allowing only two hits. (Michael Krebs)

RHP Dylan File (W, 1-0) tossed a career-high 8.1 innings to captain the Biloxi Shuckers (84-57, 2-0 Playoffs) to a 4-1 victory over the Pensacola Blue Wahoos (76-65, 0-2) on Thursday night at MGM Park. The win puts the Shuckers just one win away from a second consecutive trip to the BC® Powder Southern League Championship Series.

File got his outing started by retiring Alex Kiriloff and Royce Lewis on two pitches, and the righty needed just four pitches to take care of Trevor Larnach. The 23-year-old allowed one of his two hits on a flair single in the second to Jose Miranda but sat down the next five in a row.

Biloxi gave their starter all the run supported he needed in the third inning. Luis Aviles Jr. led off with a single and proceeded to steal second and third base. Cooper Hummel worked a walk before Dillon Thomas launched a three-run homer to right, his second of the postseason, to put the Shuckers ahead 3-0.

Jake Gatewood added another run in the fourth inning on a solo homer to center off RHP Griffin Jax (L, 0-1), Gatewood's second of the playoffs, giving Biloxi a 4-0 advantage.

Bolstered by a four-run lead, File retired 15 batters in a row from the fourth to the ninth inning. Kiriloff broke up the shutout with a solo home run to right with one out in the ninth. File stayed in the game but issued a walk to Lewis on his 104th pitch of the night, bringing manager Mike Guerrero out of the dugout to retrieve his starter. LHP Clayton Andrews (S, 1) came in and recorded the last two outs to finish off the win for Biloxi. All told, File pitched 8.1 innings and allowed just one run on two hits with one walk and six strikeouts.

Leading 2-0 in their best-of-five series, the Shuckers now go to Pensacola for Game Three of their matchup with the Blue Wahoos on Friday night at 6:35 pm. Biloxi will throw RHP Bowden Francis while the Blue Wahoos will counter with RHP Jordan Balazovic. The game can be heard locally in Biloxi on Cruisin' WGCM AM 1240/100.9 FM, TuneIn Radio or the MiLB First Pitch App and can be seen on MiLB.TV.

With the 2020 Southern League schedule announced, Shuck Nation Memberships for the 2020 season are available by calling 228-233-3465 or by visiting the Biloxi Shuckers front office.