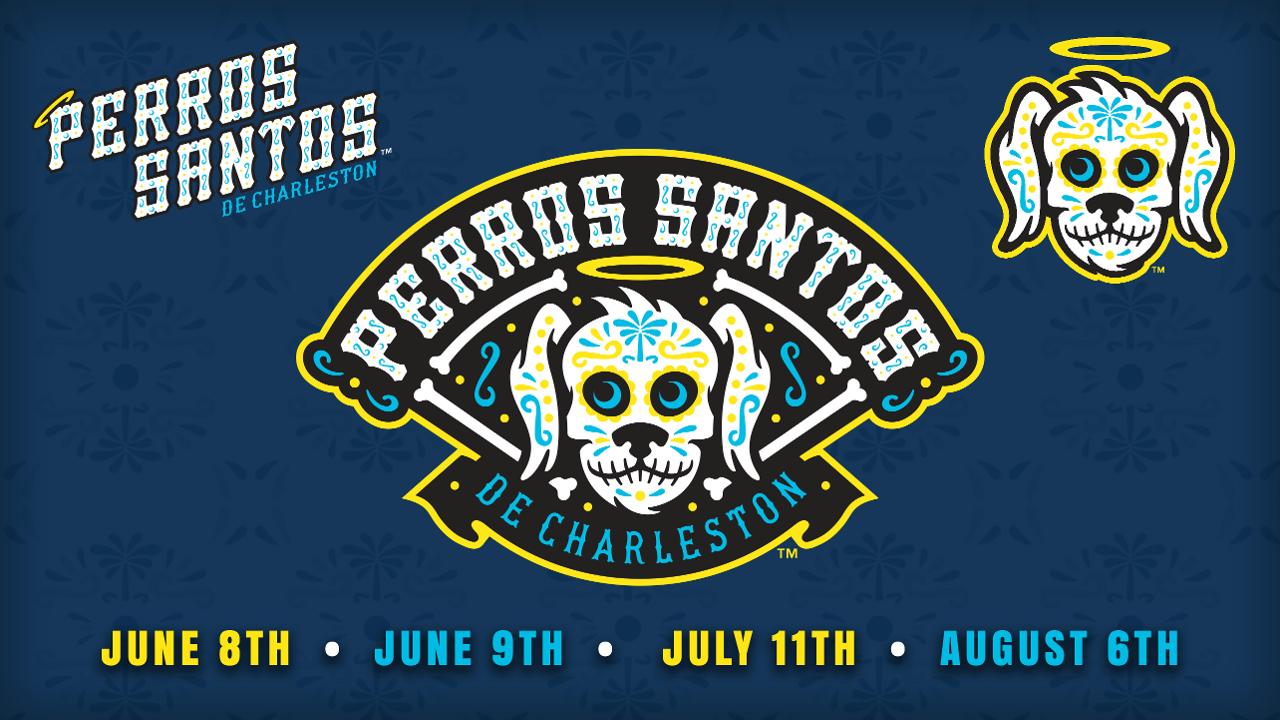 CHARLESTON, S.C. - The Charleston RiverDogs will take the field as Los Perros Santos for select games during the 2019 season, celebrating Charleston's growing LatinX population and their contingent of Spanish-speaking players on the diamond as part of Minor League Baseball's "Copa de la Diversión."

Complete with specialty jerseys and a rebranded logo tied together by its Día de los Muertos color palette, the RiverDogs will sport their new identity for four games during the 2019 campaign: Saturday, June 8; Sunday, June 9; Thursday, July 11; and Tuesday, August 6.

"We are excited to announce our new identity as well as partner up with the Berkeley County School District for a reading program to connect with our LatinX fans in the Lowcountry," said RiverDogs President and General Manager Dave Echols. "Our fans have latched onto our Holy City brand on Sundays and we see the Perros Santos as an extension of celebrating Charleston as one of the most welcoming and friendly cities in the country."

As part of their Copa involvement with the Charleston community in conjunction with MUSC Health, the RiverDogs will also launch a joint literacy program with the Berkeley County School District, 'Festival de Lectura,' encouraging and incentivizing literacy in a fun and interactive program among English Language learners. The program will reward students who meet the designated reading goals, as determined by both the club and school district. Starting April 1, kindergarten through fifth grade students from Hanahan Elementary, Goose Creek Elementary, College Park Elementary and Mt. Holly Elementary will start the seven-week, baseball-themed program.

"We are so excited that the RiverDogs have partnered with us to make learning fun," said BCSD Superintendent Eddie Ingram. "We have over 42 languages and 3 dialects spoken by our students so we appreciate any effort to improve literacy efforts with English learners in our communities as they continue to become more diverse each day. We're looking forward to celebrating these students with the RiverDogs as they reach all of the goals set out before them."

Along with their joint reading program, the RiverDogs will be welcoming Spanish-speaking youth baseball players from the Lowcountry for a Spanish-language focused youth baseball clinic for a day at The Joe.

Among the four days of promotions during Copa, the Perros Santos get the party started with their Saturday night debut, featuring a postgame piñata party, where fans can step on the field after the evening's contest for a chance to win prizes. Dora the Explorer will be on hand on Sunday's June 9 contest to greet Lowcountry kids as part of an MUSC Health Family Sunday while the Charleston faithful can take part in a stadium-wide game of "UNO" on Thursday, July 11's tilt against Rome.

For those that can't make it to the ballpark, RiverDogs fans can also catch all the action on the diamond for all four Perros Santos dates with a Spanish-language play-by-play broadcast on "La Raza," 103.9 FM in the Lowcountry.

The RiverDogs will announce their pre-season promotional schedule on Thursday, March 21, featuring a breakdown of their day-of-the-week promotions as well as a sampling of standout individual theme nights.

Copa de la Diversión is Minor League Baseball's second annual event series featuring 72 teams and a 397-game schedule across the country, helping participating teams authentically connect with their LatinX communities. The 2019 season will see 72 teams transform their brands to join in Copa's mission to authentically connect MiLB teams with their diverse communities and embrace and celebrate the culture and values that resonate most with LatinX fans nationwide.

On the heels of their second straight year eclipsing 300,000 fans through the turnstiles, the RiverDogs are preparing to "Make Fun" all season long in another year down at The Joe. Some say it's good; girls just want to have it, but where does fun come from? The RiverDogs believe that they can create a better, happier, more joyful community by helping people to "Make Fun." Single-game tickets, including options to the Riley Park Club, are now available for the 2019 campaign at riverdogs.com/tickets or by contacting the RiverDogs front office at 843-577-3647 (DOGS). The RiverDogs begin their home schedule on April 11 when they host the Greensboro Grasshoppers at The Joe, preceded by a weeklong road trip. A full schedule and list of game times for the 2019 season is available at riverdogs.com.