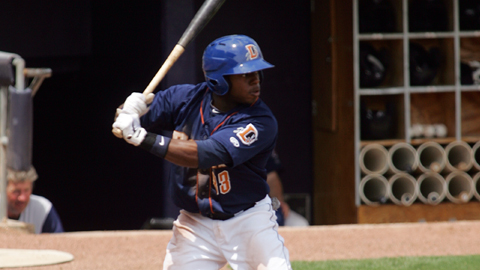 Norfolk, VA --- Jason Bourgeois singled home Kevin Kiermaier with the only run of the game in the 10th inning to lift the Durham Bulls past the Norfolk Tides 1-0 on Monday afternoon.

Bourgeois ended the regular-season by grounding a single under the glove of Tides shortstop Alex Liddi, who was drawn in with runners at first and third in the 10th. With the single, Bourgeois and the Bulls (87-57) may have knocked out the Tides from the post-season as well. Norfolk (77-67) would have advanced to the playoffs for the first time since 2005 with a win, however they do not possess the tie-breaker with Rochester. The Red Wings were leading Scranton as of 3:15 PM ET 12-3, and a Rochester win would elevate them into a tie and the International League wild card berth.

Kirby Yates (S, 20) notched his 20th save of the season, stranding Jonathan Schoop at first base by whiffing three straight Tides. CJ Riefenhauser (W, 2-1) notched the win with a perfect ninth inning.

The Bulls open the best-of-five, first round of the Governor's Cup playoffs on Wednesday night against Indianapolis at 7:05 PM ET at the DBAP. Jake Odorizzi (9-6, 3.33) will start the opener for Durham against Indians RH Brandon Cumpton (6-7, 3.32).