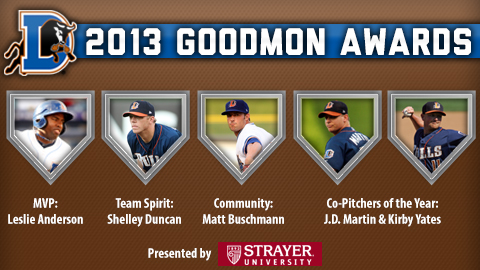 Prior to Tuesday night's game, the International League South Division Champion Durham Bulls will recognize the winners of the 2013 Goodmon Awards, presented by Strayer University. The 20th Annual Goodmon Awards, named for Capitol Broadcasting Company CEO Jim Goodmon, acknowledge Bulls players for their contributions to the success of the team both on and off the field.

Leslie Anderson has been selected as the team's MVP for the second straight season. Anderson is having yet another stellar year for the Bulls, as he currently leads the team in home runs (14) and RBI (72). The veteran has tied his career best in homers and has already set new personal season-highs in RBI, OBP (.376), and SLG (.466). The Camaguey, Cuba native is in his fourth season with Durham.

For the first time in the 20-year history of the Goodmon Awards, the Bulls will honor Co-Pitchers of the Year. Starter J.D. Martin and closer Kirby Yates were both named mid-season International League All-Stars and will share the honor as the Bulls' most outstanding hurler. Martin's phenomenal 2013 campaign includes two IL Player of the Week awards, a Topps/IL Player of the Month nod, and Durham's new Triple-A single-season record with 15 wins. Not to be outdone, Yates boasts a miniscule 1.69 ERA to go along with 18 saves in his rookie Triple-A season. Opponents are hitting just .167 against the native Hawaiian (3rd lowest in IL) and his 13.3 strikeouts per 9 innings pitched are second best in the league.

The 2013 Goodmon Award for Team Spirit goes to Shelley Duncan. Duncan, added to the Bulls roster on May 6 after beginning the season with Tampa Bay, is one of the club's veteran leaders and his positive presence in the clubhouse has been palpable all year long even after he spent time on the bereavement list in June. He is the only Bulls player on the current roster to have played in a Triple-A National Championship Game (2008 with Scranton/Wilkes-Barre).

Matt Buschmann is recipient of the Community Service award. Buschmann has been extremely active in Bulls' charitable appearances since being called up from Double-A Montgomery in late May. He has participated in meet and greets with local Boys & Girls Clubs, promoting healthy and active lifestyles, and also the Drug-Free Junior Bulls Kids Club.

The Durham Bulls continue their final homestand of the regular season tonight against the Charlotte Knights. Tickets for the last two remaining regular season home games, as well as tickets for the first round of the 2013 Governors' Cup Playoffs at the DBAP on September 4 and 5, are available at durhambulls.com, by phone at 919.956.BULL, and at the Durham Bulls Athletic Park box office.

The 2013 Goodmon Awards, brought to you by Strayer University, Bringing Home the Bulls in September.