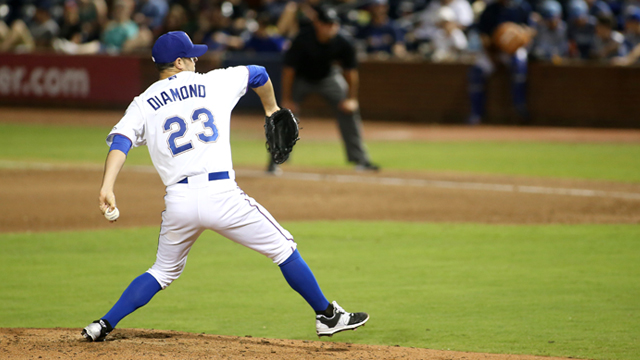 Scott Diamond dropped to 7-3 on the season, taking the loss in Durham's 4-1 defeat Friday night

DURHAM, NC - The Durham Bulls dropped their third straight contest Friday night at the DBAP, falling to the Columbus Clippers 4-1 in the second game of a four-game set.

For the second night in a row Columbus (37-32) jumped out to a lead in the first inning, as Jesus Aguilar's sacrifice fly scored Tyler Naquin for a 1-0 lead. In the fourth Aguilar struck again, launching a leadoff homer down the leftfield line for a two run advantage.

The Bulls (39-30) made it a one-run game in the fifth, as Ryan Brett singled with the bases loaded to score Alexi Casilla from third base. Durham left the bases loaded after Brett's single though, and stranded Mikie Mahtook after a leadoff triple in the sixth.

The visitors tacked on a run in the seventh on an RBI single from Michael Martinez, and closed the scoring in the eighth when Jose Ramirez singled to lead off the inning, advanced all the way to third base on a wild pitch, and came around to score on a second wild pitch with two outs.

CC Lee (2-1) got the win in relief, tossing 1 1/3 scoreless innings behind southpaw Nick Maronde, who allowed one run on three hits and struck out 11 over 4 2/3 frames. Lefty Scott Diamond (7-3) was the tough-luck loser for Durham, allowing three runs on six hits over 6 1/3 innings.

Durham managed just four hits in the defeat, while striking out a season-high 18 times. Taylor Motter singled in the first inning to extend his hitting streak to 15 games, the longest streak in the IL this season.

Durham aims to stop their losing skid Saturday when they send LHP Robert Zarate (0-0, 0.00) to the mound in his first start of the season opposite RHP Jordan Cooper (2-2, 4.50) for the Clippers. First pitch is scheduled for 6:35 p.m.