Bulls Inch Closer to Cup with Win in 14-Inning Classic

Durham Outlasts Pawtucket in 5 Hour, 42 Minute Battle for the Ages 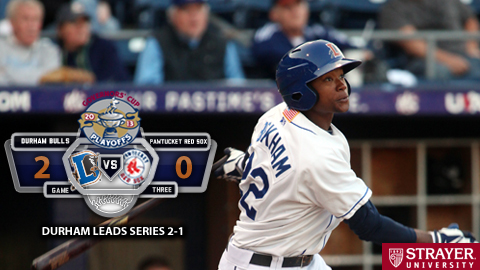 After playing over 5 ½ hours of scoreless baseball, the Durham Bulls punched across a pair of runs in the top of the 14th to defeat the Pawtucket Red Sox to claim a 2-1 series lead in the best-of-five Governors' Cup Championship Series on Friday night.

Should the Bulls go on to claim their 4th Governors' Cup title this weekend, they will look back to Friday night's epic as a moment that will be forever frozen in their memories.

Friday's game featured dozens of moments where the victory was held in the balance, only to see either the Bulls or PawSox denied. Finally, the Bulls' seized their opportunity in the 14th inning.

With one out, Kevin Kiermaier drilled a line drive to PawSox right fielder Bryce Brentz, who appeared to be under control to make the catch. However, as the ball approached, Brentz reached high and failed to make the catch, allowing Kiermaier to take third. After an intentional walk, Tim Beckham hit a two-strike grounder to second base, only to have Brock Holt throw errantly home with no PawSox defender covering. Kiermaier scored the game's long-awaited first run. The Bulls would tack on an insurance run when Jason Bourgeois legged out the back-end of a potential double play ball.

Kirby Yates (S, 4) entered behind Enny Romero (W, 1-0) to save the Bulls' victory, but not before filling the bases with two outs. Brentz, looking to atone for his fielding mistake, struck out against Yates on a 3-2 pitch to end the contest, moving the Bulls to one win of capturing their 4th International League Championship.

The Bulls and PawSox combined to use 16 pitchers, with 33 total baserunners left aboard.

The Bulls can clinch the Governors' Cup in Game Four on Saturday night at 6:05pm. Merrill Kelly is set to oppose Pawtucket's Charlie Haeger from McCoy Stadium.