IL's last two champions face each other for 2014 title 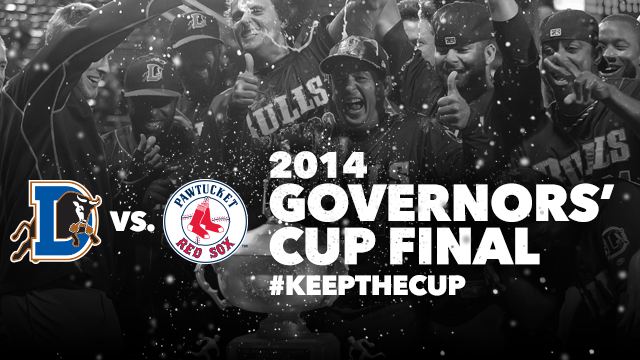 In a rematch of last season's championship round, the reigning International League Champion Durham Bulls will once again battle the Pawtucket Red Sox for the coveted Governors' Cup. The South Division Champion Bulls travel to McCoy Stadium on Tuesday for Game One of the Best-of-Five Governors' Cup Final. The PawSox, the League's Wild Card entry into the playoffs, will also host Game Two before the series moves to the DBAP for Game Three on Thursday, September 11. Games Four and Five will be played in Durham, if necessary, on Friday and Saturday.

Games Four and Five will be hosted at the DBAP on September 12 and 13, if necessary. Both of those contests would also be played at 7:05 p.m.

The winner of the Governors' Cup will go on to play the Pacific Coast League Champion, either Omaha or Reno, in the 2014 Gildan Triple-A National Championship Game on September 16 at BB&T Ballpark in Charlotte, NC.

Single game playoff tickets are $10 for all seating bowl locations. Groups of 20 or more can purchase playoff tickets for $8 each. Playoff tickets are now subject to the State of North Carolina's tax of 7.5% on all ticketed entertainment and live events. Tickets for the Governors' Cup Playoffs can be purchased now at the DBAP box office, by phone at 919.956.BULL, or online HERE at durhambulls.com.