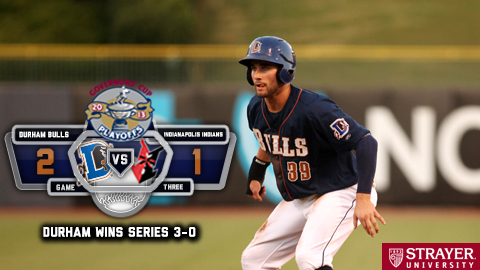 INDIANAPOLIS, IN - Merrill Kelly, Adam Liberatore and Juan Sandoval combined to send the Durham Bulls to a 2-1 win over the Indianapolis Indians Friday night at Victory Field, completing a three-game, first round sweep that sends the Bulls back to the Governors' Cup Championship Round for the first time since 2010.

The Bulls scored twice in the third and final inning of work by Major League rehabber Wandy Rodriguez thanks to a single by Cole Figueroa and a force-out grounder by Jason Bourgeois. Those two runs would hold up, but not without same late inning drama.

Kelly (W, 1-0) pitched 5 2/3 innings to earn the win. Liberatore recorded four outs before turning the game over to Sandoval (S, 1) for the save. Sandoval allowed a run in the last of the ninth on a pinch-hit single by Ivan DeJesus Jr. With the tying run at third and two outs, Figueroa handled an in-between hop grounder by Robert Andino and with his throw to first base, sent the Bulls back to the International League championship series.

The Bulls will now await the winner of the Pawtucket/Rochester series. The PawSox took a 2-1 series lead tonight with their 5-1 win over the Red Wings, and are now a game away from joining the South Division champs in the IL Finals.

Durham Bulls Athletic Park will host Game One on Tuesday, September 10 and Game Two on Wednesday, September 11. Both contests are scheduled for 7:05pm. The best-of-five series will then move to the home park of the Pawtucket/Rochester series winner.

The eventual International League Champion will move on to face the winners of the Pacific Coast League title in the one game, winner-take-all, Gildan Triple-A National Championship Game at Coca-Cola Park in Allentown, PA on September 17.

Single game playoff tickets are $10 for all seating bowl locations. Groups of 20 or more can purchase playoff tickets for $8 each. Tickets for the Governors' Cup Championship Round can be purchased at the DBAP box office during regular business hours, by phone at 919.956.BULL or online at durhambulls.com.