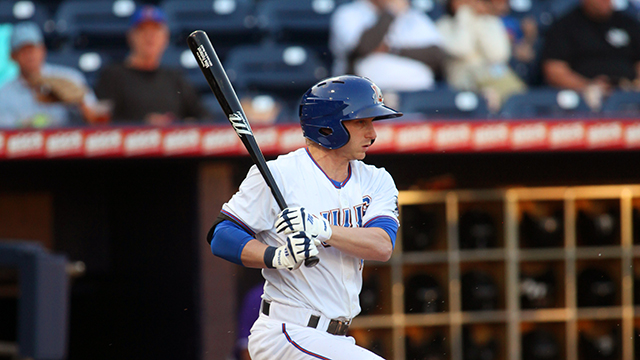 Rochester, NY --- Tim Beckham had four hits in his first game back with Durham, while Mike Fontenot spread six hits across a doubleheader split for the Bulls in Rochester on Wednesday night.

Beckham, who tore his ACL in December, made a successful return to the Bulls (64-61), collecting four singles in his return, while Fontenot had four hits and four RBI in the opening game 8-7 win over the Red Wings (68-57).

The Bulls blew a 7-3 lead in the seventh, only to finally cash in the winning run in the 11th on a Fontenot double into left-centerfield that died just before Aaron Hicks diving effort arrived. Vince Belnome, who walked with two outs, scored the eventual winning run. Fontenot finished 4-5 with a season-high four RBI. Beckham capped the night going 4-6.

The game had been suspended after two innings on Tuesday night after 44 minutes, and wrapped up in 4 hours and 31 minutes.

In the nightcap, Tyler Duffy (W, 1-0) won his Triple-A debut and his 12th game overall as Rochester held on to beat the Bulls 4-2.

Trailing 4-0 in the sixth, Nick Franklin hit an opposite-field, two-run homer to slice the deficit to two. In the seventh, Duffy allowed a walk to Belnome and a single to Fontenot before needing relief help from Lester Oliveros. Batting as the go-ahead run, Wilson Betemit and Ali Solis fanned, with Hak-Ju Lee softly lining to the mound to end the game.

The end of the opener saw both benches empty after Justin Christian was hit by Michael Tonkin in the 11th inning. Durham manager Charlie Montoyo was ejected after Christian was restrained. Christian had been hit on the hand earlier in the series.

Fontenot finished the doubleheader with six hits in eight at-bats.

Jake Thompson (L, 3-1) made the start in the nightcap, allowing four runs on four hits over 2 1/3 innings.