Mud Hens Hold on To Early Lead to Drop Bulls 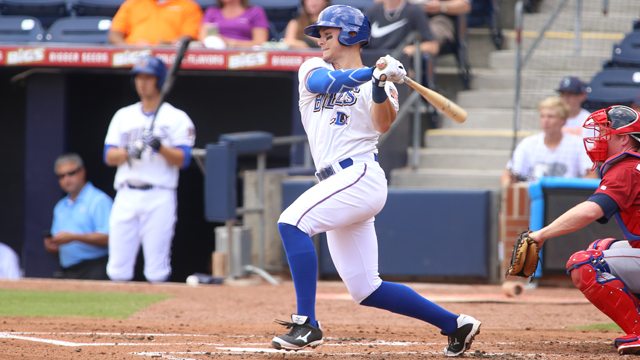 DURHAM, NC - The Toledo Mud Hens scored seven runs over the first three innings Wednesday afternoon, riding the early lead to a 7-5 victory over the Durham Bulls at the DBAP.

After taking a lead on a solo homer by Jordan Lennerton in the second, the Mud Hens (32-41) sent 10 men to the plate in the third inning en route to scoring six runs. In the frame the visitors scored on an RBI triple by Xavier Avery, a two-run dinger to leftfield from Jefry Marte and a three-run homer by Lennerton for a 7-0 advantage.

In the fourth Durham (40-33) got on the scoreboard when Taylor Motter lined an RBI single, scoring Eugenio Velez who had doubled to lead off the frame.

The 7-1 score held until the bottom of the ninth, when the Bulls rallied by scoring four times. After a one-out single by Allan Dykstra, Richie Shaffer lined a two-run dinger over the Blue Monster to cut the deficit to four. Alexi Casilla and Luke Maile then lined back-to-back singles, and after a pop out Velez drove home both runners with a triple. That brought Corey Brown to the plate as the tying run, but the outfielder struck out, as Durham dropped its sixth game in its last seven tries.

Thad Weber (5-3) picked up the win by allowing one run on four hits over six innings, while Guido Knudson picked up his first save of the campaign by retiring Brown for the final out. Right-hander Dylan Floro (7-6) suffered his second straight loss, tying a career-high by allowing seven runs on seven hits over 2 2/3 innings.