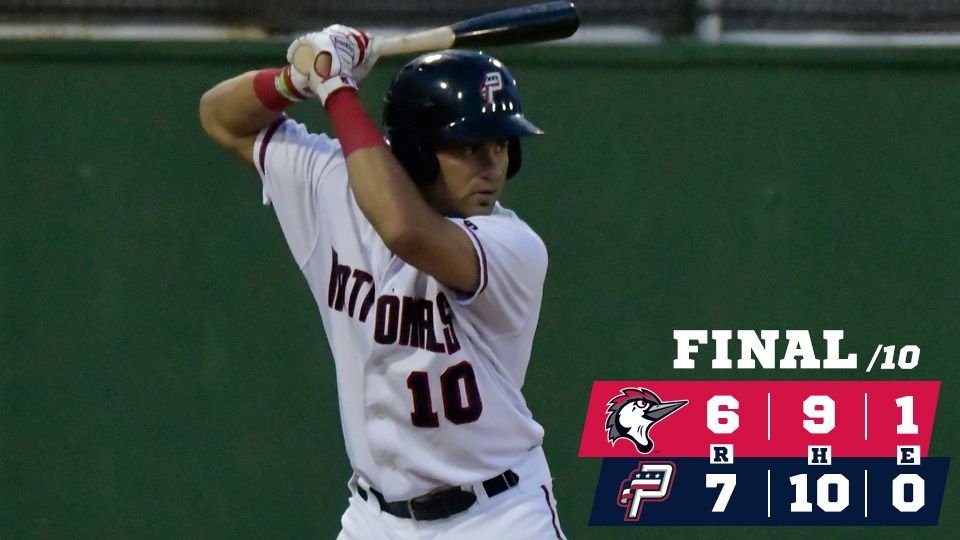 Woodbridge, VA-For the third time in six home games and the second time in as many matchups, the Potomac Nationals (39-47, 9-10) picked up a walk-off win over the Fayetteville Woodpeckers (40-48, 9-10). With a runner at third base and one out in the bottom of the 10th inning, 3B Bryan Mejia chopped a ground ball to 2B Miguelangel Sierra, whose throw to the plate airmailed C Michael Papierski and plated RF Gage Canning . The RBI fielder's choice gave Potomac a 7-6 win, two days after a 4-3 walk-off win on a solo home run in the ninth inning from LF Nick Banks .

In consecutive games, the Woodpeckers lost multiple leads. In the finale of an abridged two-game series on Tuesday afternoon after Monday's postponement, Fayetteville held leads of 1-0, 4-1, and 6-4, yet lost each one of them. Despite three comebacks in the win, Potomac never led until the final play of the game.

The P-Nats erased a second inning 1-0 deficit on a two-out RBI single from SS Gilbert Lara . After Fayetteville scored three times in the top of the fourth inning against LHP Nick Raquet (ND), Potomac tagged RHP Shawn Dubin (ND) for three runs in the home half of the fifth inning on consecutive RBI hits from 2B Osvaldo Abreu , Banks, and CF Cole Freeman . The score was 4-4 after five frames.

Fayetteville put a run on the board in both the sixth and seventh innings. DH Jacob Meyers greeted RHP Kyle Barraclough with a leadoff home run in the sixth inning, while 3B Jake Adams gave the Woodpeckers a 6-4 lead with an RBI single off of RHP Andrew Istler in the seventh frame. The home run allowed by Barraclough was the second in as many outings as part of a rehab assignment with Potomac, while the run charged to Istler was the first charged to the Potomac reliever in 11 appearances in 2019.

RHP Brett Conine entered from the Fayetteville bullpen to start the sixth inning. The right-handed reliever worked around a walk in the sixth frame, stranded the bases loaded in the seventh inning, and stranded men at first and second base in the eighth frame. Back out for the ninth inning, Conine issued a leadoff walk to Banks. Freeman followed with a double, which put the tying runs in scoring position with no outs. Conine buckled down and struck out both 1B Aldrem Corredor and DH KJ Harrison before the Woodpeckers went back to the bullpen. Fayetteville brought in RHP Miguel Figueroa for his Carolina League debut. The right-handed reliever fell behind C Jakson Reetz 2-1 before the All-Star catcher tied the game with a two-out, two-run single to left field. In 14 games since the All-Star break, Reetz has hit .400 (20-50) with six home runs and 19 RBIs. The catcher hit .220 with just one home run and 17 RBIs in the first half of the 2019 season.

Potomac turned to RHP Frankie Bartow (W, 1-2) for the 10th inning. With CF Chandler Taylor as the free baserunner at second base, Bartow struck out Meyers, got Sierra to fly out to centerfield, walked 3B Enmanuel Valdez, but got RF Scott Schreiber to fly out to left field, as the Woodpeckers failed to score in the top of the 10th inning.

In the home half of the final frame, RF Gage Canning began the inning as the free baserunner at second base. Lara dropped down a successful sacrifice bunt, as the P-Nats had Canning at third base with only one out. On a 1-1 pitch, Mejia rolled a ground ball to second base and Sierra's throw to the plate was late and well above the head of Schreiber. Canning scored the winning run as Potomac walked off with a 7-6 win in 10 innings.

Off of their second sweep of the season, the P-Nats will head out on a six-game road trip, with three games against the Myrtle Beach Pelicans and three against the Woodpeckers.

First pitch at TicketReturn.com against Myrtle Beach on Wednesday night is set for 7:05pm. The Potomac broadcast will get underway at 6:50pm with the P-Nats Leadoff Show. You can listen to the Potomac broadcast at potomacnationals.com or on the TuneIn Radio App.