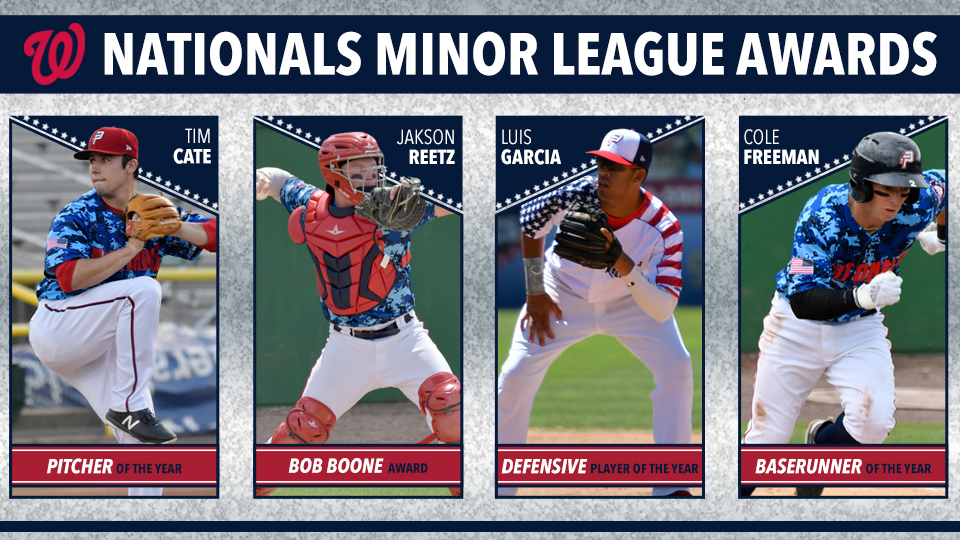 FREDERICKSBURG, Va. - The Washington Nationals selected the following former Potomac Nationals players for their 2019 Minor League Players of the year:

These players will each be recognized for their awards in a ceremony during 2020 spring training.

Pitcher of the Year recipient, Left-Handed Pitcher Tim Cate, 21, finished out his 2019 season with the Potomac Nationals after starting the season with Single-A Hagerstown. He led qualified Nationals Minor League pitchers in strikeouts (139), starts (26) and ranked second in ERA (3.07) and WHIP (1.14) between Single-A Hagerstown Suns and Single-A Advanced Potomac Nationals. Cate had 139 strikeouts, 32 walks, and six home runs in 143.2 innings pitched in his second professional season.

Cate was selected in the second round of the 2018 First-Year Player Draft from the University of Connecticut and was later signed by Washington Nationals Scout John Malzone.

Defensive Player of the Year recipient, Infielder Luis Garcia, is the youngest player in the Double-A Eastern League and the youngest recipient of the Defensive Player of the Year Award at 19-years-old. Garcia played with the Potomac Nationals in the second half of the 2018 season. He capped his 2019 season with the Double-A Harrisburg Senators as the No. 82 prospect in baseball by Baseball America and as the No. 92 prospect by MLB Pipeline.

Garcia ranked among Nationals Minor Leaguers in hits (4th, 135) and runs scored (7th, 66), in his third professional season. From May 30th through the end of the season, Garcia hit .282 with 17 doubles, three triples, four homers, 22 RBI and 43 runs scored. He was signed as a non-drafted free agent on July 2nd, 2016 by Nationals scout Carlos Ulloa.

Baserunner of the Year recipient, Infielder Cole Freeman, 24, played 123 games for the P-Nats during the 2019 season.

Freeman was selected in the fourth round of the 2017 First-Year Player Draft out of Louisiana State University. He was signed by Nationals scout Ed Gustafson.

Reetz was originally selected in the third round of the 2014 First-Year Player Draft out of Norris High School in Firth, Nebraska. He was signed by Nationals Scout Ed Gustafson.

Fredericksburg Baseball is set to begin Carolina League play in 2020 at a brand new, state of the art stadium facility, located at Celebrate Virginia South on Carl D. Silver Parkway near the Fredericksburg Expo & Convention Center in Fredericksburg, VA. Stay up to date with the progress of the new ballpark facility and the team online at www.fredericksburgbaseball.com, and follow Fredericksburg Baseball on Facebook (@PotomacNationals), on Twitter (@PNats42), and on Instagram (@PNats42) until the new team name and social handles are announced on October 5th, 2019.