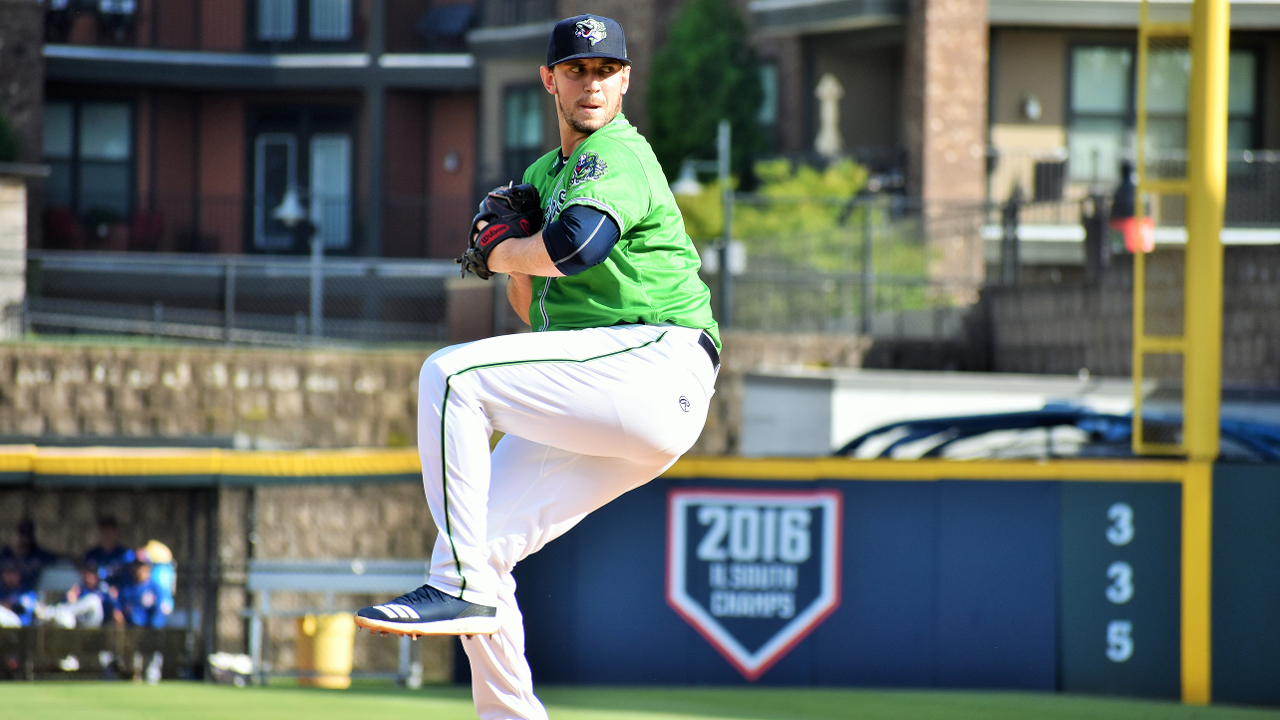 Editor's note: This story is featured in the August edition of the Gwinnett Stripers Fishing Report, available for free at Stripers home games.

Atlanta Braves pitching prospect Patrick Weigel was rising quickly through the organization in 2017. The seventh-round pick out of the University of Houston in 2015, Weigel was pitching well with Triple-A Gwinnett and on the cusp of a Major League call-up in just his second full season. In June of that year, however, everything changed. He began to feel a lingering soreness in his elbow, and later received an MRI to confirm that he needed Tommy John surgery.

The injury came less than a year after Weigel had a breakout 2016 season, going 11-6 with a 2.47 ERA in 25 games between Class-A Rome and Double-A Mississippi to earn the Braves' Minor League Pitcher of the Year award. The 6-foot, 6-inch right-hander returned to Mississippi to open 2017 but was quickly promoted to Gwinnett after going 3-0 with a 2.89 ERA in seven starts. Seven outings into his Triple-A career, he was 3-1 with a 3.58 ERA, and nearing his lifelong goal of reaching the Majors.

The injury, suffered during a loss at Columbus on June 18, 2017, forced him to suddenly change his mindset.

"I was really hoping to be able to make that push to get there (to the Majors), and obviously with the injury I wasn't able to complete that," Weigel said. "I really did not handle it well at first. My mindset went from trying to make a push, trying to make the big-league roster, to understanding I'm not going to be playing baseball for a year and a half. I really struggled with that for the first couple of months. It took me a while to make that transition to 'this is my life now, it's time to knock out all the rehab and battle through adversity'. I think the adversity made me a better player and a better person."

The hardest part for Weigel while being out was not being able to compete. Fortunately he found some creative ways to keep his mind off baseball and rehab.

"The first couple of months you can't do much of anything at all," Weigel said. "I actually became an Uber driver just to get out of my hotel and drive around Orlando. So, I was just working for Uber and as time went on, I was able to do more and more things. I found different outlets like that away from baseball. I was trying to pick up hobbies and expand myself after surrounding myself with a world of baseball, so I was able to grow a lot in that season."

As for the rehab process itself, Weigel says it made him a better pitcher. He came back stronger mentally and was able to work on adjusting his delivery and perfecting his mechanics.

"I got hurt for a reason, whether it was a flaw in mechanics or a flaw in preparing," Weigel said. "It caused me to take a deep dive into what proper mechanics are and how well my delivery matches up to ideally what I would like. I was able to identify certain things in my delivery that were not very efficient. (I had) time to step back and think about where in my delivery or where in my mental state I can improve when I get back."

Weigel returned to the mound during a four-game rehab assignment with the Gulf Coast League Braves late in 2018 but wasn't fully back to health until this year. He opened 2019 with Mississippi, going 0-1 with a 1.72 ERA in seven starts, then joined Gwinnett on May 13. Over 14 games (10 starts) with the Stripers through July, he went 5-1 with a 3.08 ERA and struck out 39 through 49.2 innings.

"My number one goal this year was to not get hurt and to stay healthy," Weigel said. "So far I have not had any setbacks. I didn't have any closure on ending rehab until I was back here (in Gwinnett). To be able to hit that milestone, I was able to finally put the rehab behind me."

Weigel credits his successful return in part to Stripers pitching coach Mike Maroth, who worked with him in Florida while serving as the Braves' minor league pitching rehab coordinator in 2017. The two are reunited at the Triple-A level this season.

"(Weigel) has been out for two years, and so for him to get back out on the mound, get into a routine and pitch some innings is really the most important thing," said Maroth. "He has a lot of deception with all of his pitches and he shows plus stuff at times. I think one of the biggest things is getting back to where he can repeat his delivery which will give him a lot better command."

Maroth has seen a lot of improvement in Weigel but is still helping the 25-year-old fine-tune his ability and work on being more consistent.

"He is still trying to get back to where he once was," Maroth said. "He got to Gwinnett and that is where he got hurt, but for him to get back here was step one. Now it's getting to the next level, where he wants to be. He is working on the command of his fastball and has messed with his slider a little bit. He is trying to get that (pitch) more consistent. Just like every young guy he is trying to get better at his craft."

Just over two years removed from his career-altering injury, Weigel received his long-awaited promotion to the big leagues on July 19 as the Braves recalled him from Gwinnett. Though he didn't get to pitch before being optioned back to the Stripers on July 21, the call-up was proof that he is back in the Braves' plans for 2019 and beyond.

"Just being there (in Atlanta) for a couple days, I got the vibe and the feel for the big-league clubhouse," Weigel said. "I was able to see how older guys do it day in and day out. It was a blessing to be up there and to take it all in. Hopefully next time I get up there it will be a lot easier for me having already been there."