Past favorites and new giveaways, themes, appearances, great food, post-game concerts, and fireworks displays; offers something for every Renegades fan during the 2019 season! Individual ticket sales begin on Saturday, April 20 at 10:00 a.m. both online and at the Emery & Webb Dutchess Stadium Box Office 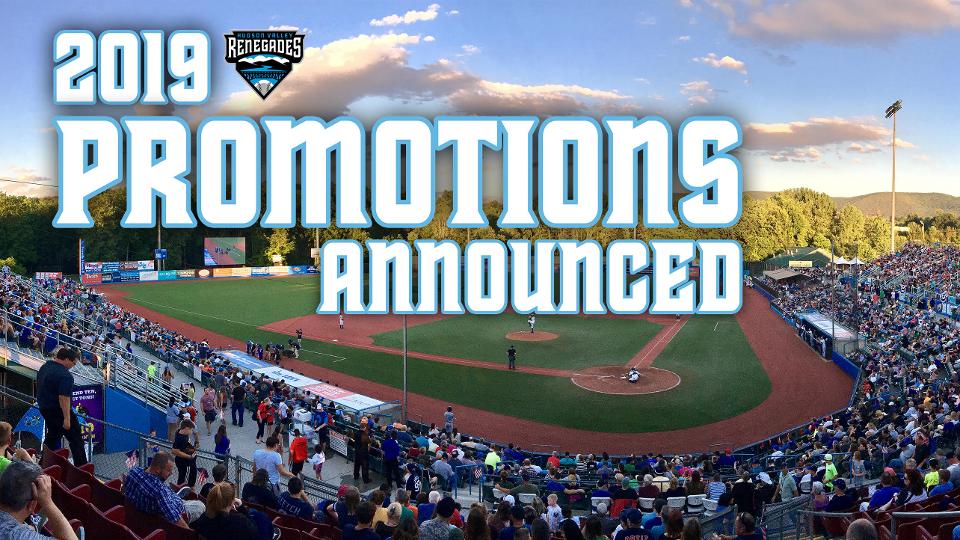 The Renegades make it a priority to ensure all fans have positive experiences and build memories to last a lifetime. To achieve this, the Renegades season is once again filled with awesome theme nights, fun giveaways and plenty of guest appearances.

Individual game ticket sales begin on Saturday, April 20 at 10 AM, and the first pitch at Dutchess Stadium will be thrown just 56 days later on June 16. Opening Day is a game you won't want to miss because it features a giveaway and a return performance by the ZOOperstars!

The first of this year's giveaways will take place on Opening Day, June 16. The first 1,000 fans 12 and under will receive a Renegades Fidget Spinner in honor of our opponents, the Lowell Spinners. The very next day, fans will be gifted St. Patrick's Cathedral Logo Baseballs on Catholic Education Night; the giveaway is limited to the first 2,500 fans through the gates.

On Friday, June 21 and Saturday, June 22, the first 2,000 fans at each will receive a Renegades Schedule Magnet so you never miss a game! Sunday, June 23 the first 1,000 fans will receive replica rings that the team received back in 1999 after winning their first New York - Penn League Championship.

On July 2, the Renegades are jumping on the participation trophy bandwagon by giving fans who stay through the end of the game a participation trophy.   The first 1,000 fans will receive their very own Renegades cap on July 11. A new night #AtTheDutch includes Conspiracy Theory Night, where fans can take home a "Flat Earth" Frisbee! Whoever said you can't be in the Christmas Spirit all year long has never celebrated Christmas in July. The Renegades will be doing so on July 25, so get to the stadium early to get your Rascal Snow Globe! These giveaways are all for the first 1,000 fans through the Dutchess Stadium gates.

Don't miss out on August 8 to snag a pack of 2019 Renegades Baseball Cards, with a player meet and greet post-game to have your favorite 'Gades sign their card. Marking the 50th Anniversary of the Woodstock Music Festival, the Renegades are celebrating Gadestock on August 17 with Tie Dye T-Shirts for the first 1,000 fans and a post-game musical tribute to commemorate the event. On August 18, the first 1,000 fans 12 years old and under will receive a Renegades wiffle bat and ball.

To celebrate the regular season coming to an end, kids 12 years old and under going back to school the following week, the game on September 1, will offer "Back to School" Lunchboxes for the first 1,000 kids 12 years old and under and September 2, will allow fans the opportunity to help us "clean out our closet" with the chance to take home one-of-a-kind Renegades giveaways from past and present!

The Renegades are thrilled to announce new themes nights to continuously add to the game #AtTheDutch, fan favorites and unforgettable experiences! There's no need to travel to a magical kingdom to meet your favorite Princesses, because on June 23 they're all going to be in the Hudson Valley! Princess Night will feature a tea party while you can meet and greet with your favorite royalty and be gifted your own tiaras and wands!

Head to a ballpark in a galaxy far, far away for Star Wars Night! Come meet your favorite characters but be careful not to get pulled to the Dark Side! To help keep you protected be sure to check out the ticketing packages available for the night which include t-shirts and lightsabers. After the game, we will be showing The Force Awakens on our videoboard so be sure to stick around after the game to "Feel the Force" at the Dutch.

For the first time ever, throughout the summer the Renegades are hosting four special Food Festivals. Allow your taste buds to be amazed during Dessert Fest (July 6) for your sweet tooth, Restaurant Fest (July 18), Wing Fest (August 3), and Craft Beer Fest (August 10) to wash it all down.

For the first time the Renegades are hosting a Pride Night on July 31. Join the Renegades and the MiLB to help celebrate and embrace the LGBTQ community in the Hudson Valley.

The Hudson Valley Renegades are holding a special "Love Your Melon" Night at Dutchess Stadium on August 27 as a part of Survivor's Night. The Renegades have a special offer, limited to the first 250 fans. For $30 fans will receive a ticket to the game plus a limited-edition Renegades "Love Your Melon" beanie hat that can be picked up at the ballpark on the night of the game. These beanies will be available for purchase through an online link, which can be found at hvrenegades.com.

It's Labor Day and if you are an expecting Mom who has a due date right around September 2 make sure to reach out to the Front Office because if you are #AtTheDutch on this date, go into labor at the game and deliver your newborn within four hours of doing so, your child will win a $100,000 college scholarship! Rules and restrictions apply.

On Opening Day, the Renegades welcome back the ZOOperstars! to Dutchess Stadium. They are the world famous traveling inflatable entertainment act, based in Louisville, Kentucky who utilizes comedy, acrobatics, tricks and maneuvers accompanied by synchronized dancing to entertain. Currently, this mascot troupe has over 40 different characters who sport similar pun-based names.

On July 18 the "Soup Nazi" will be in the ballpark! Larry Thomas is an American actor, best known for his guest role as Yev Kassem, the Soup Nazi, on Seinfeld, for which he was nominated for an Emmy Award.

Head onto the field post-game, August 8 to have a meet and greet with your 2019 Renegades. There will be free autographs and opportunities to take selfies too!

To celebrate the 30th Anniversary of the iconic baseball movie Field of Dreams, Dwier Brown will be in the stadium. Brown is best known for playing Kevin Costner's father in Field of Dreams. Stay after the game and watch Field of Dreams on the Dutchess Stadium video board.

Each week has reoccurring promotions to go along with any other specialty event.

Mondays are ruff so enjoy $5 Margaritas and don't forget it's Bark in the Park, which gives fans the ability to enjoy the game alongside their pets! Dogs must be leashed at all times, be good with kids of all ages and the noises that come along with being in the ballpark.

"Twosdays" are $2 Tuesdays where different food and beverage stands offer specials. The First and Third Base Stands offer $2 Fountain Beverages, $2 Popcorn, and $2 Hotdogs. The Totally Tacos stand is offering a $2 Taco Tuesday Special. The Stadium Bistro is offering $2 Snow Cones.

Wednesdays are Warrior Wednesdays where the Renegades want to appreciate those past and present who have or are serving in any branch of the military, offering them free admission to games. Don't miss out on the only day of the week to enjoy the Renegades Award Winning Wings! Make sure you bring your appetite for all you can eat Wednesdays featuring a Medium Fountain Drink, Hot Dogs, Hamburger/Cheeseburger, Bottled Water, Snow Cones, and Popcorn for just $19! This includes a Grandstand Ticket to the game. (Excludes July 3 & July 24)

Thursdays are Thirsty Thursdays where each game will have selected Domestic Draft Beer for only $2. Come with your quick facts ready for Trivia Night in Landshark Landing.

Fridays starting on June 21, we will have the biggest post-game Fireworks displays right here in the Hudson Valley!

Sunday FUNdays this season include giveaways, family friendly events, special character appearances, post-game base running for the kids and Snow Cones will also be half-priced.

To stay informed on all Renegades promotional happenings, be sure to follow along on Twitter (@hvrenegades), Facebook, Instagram and at hvrenegades.com. The 2019 promo slate promises to be one of the best in Minor League Baseball! All of our promotions are subject to change.

The Renegades' 26th season at Dutchess Stadium begins on Sunday, June 16 at 4:05 pm against the Lowell Spinners. Single-game tickets for all 38 home games will go on sale this Saturday, April 20 at 10 am. Suites, party venues and picnics for the 2019 season are also being booked now. Call (845) 838-0094 or go to hvrenegades.com for more information. We look forward to seeing you here #AtTheDutch this season!