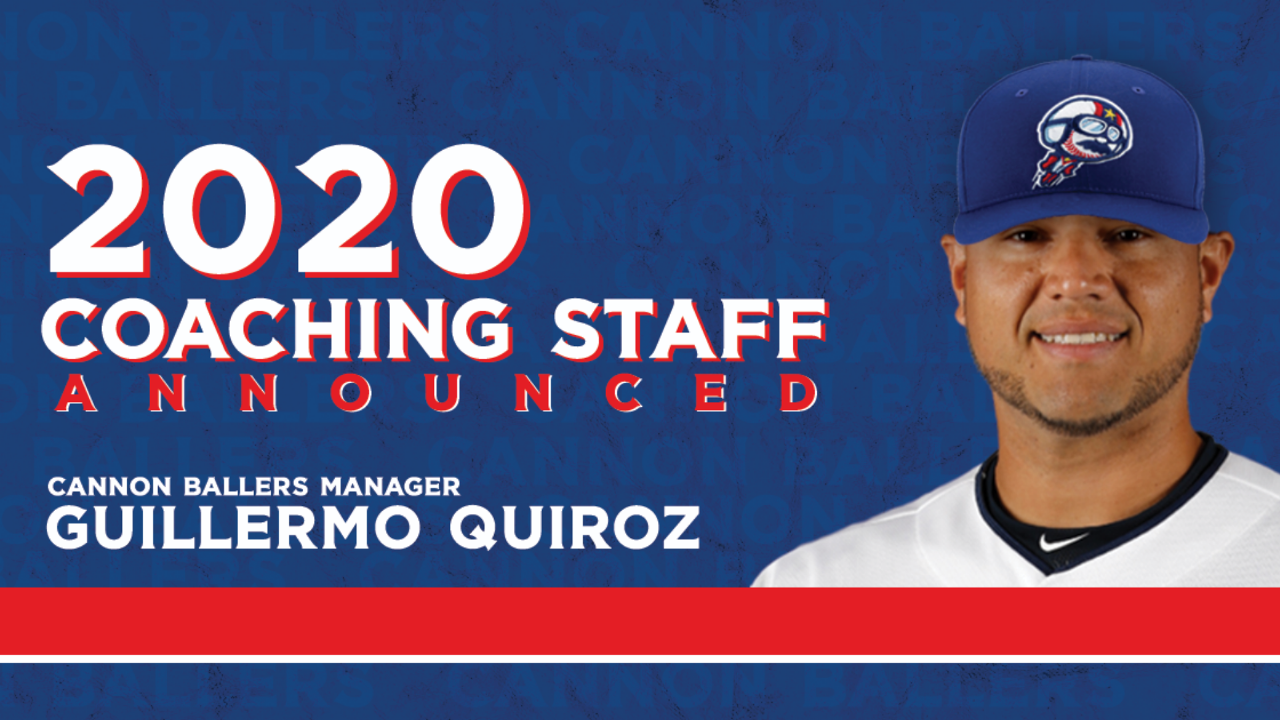 (KANNAPOLIS, N.C.) - Preparing for a season full of firsts in Downtown Kannapolis, the Cannon Ballers will lean on first-year manager, Guillermo Quiroz , to lead the team during their inaugural season. The White Sox will also call on returners José Bautista (pitching coach), Cole Armstrong (hitting coach), and Joe Geck (trainer), along with newcomers, Patrick Leyland (coach), and Kevin Childs (performance coach), to help pave each player's journey to the South Side of Chicago.

Quiroz, 38, comes to Kannapolis after making his way around the White Sox coaching tree that consumes the Tar Heel state, with his first stop coming in Winston-Salem (Class A Advanced) as a coach in 2018, and most recently as the hitting coach with the Charlotte Knights (Class AAA) in 2019. A ten-year major league veteran, Quiroz spent time in Toronto (2004-05), Seattle (2006, 2009-10), Texas (2007), Baltimore (2008), Boston (2012), and San Francisco (2013-14). Going out in style, Quiroz was a member of the San Francisco Giants team that captured the 2014 World Series over the Kansas City Royals. After beginning his baseball career by signing with the Blue Jays in 1998 at just 17 years old out of Maracaibo, Venezuela, Quiroz played a total of 17 years of professional baseball.

Bautista returns as the team's pitching coach after serving in the same role in Kannapolis last season. Entering his 13th season in the White Sox system, Bautista also guided the Kannapolis pitching staff from 2011-15. Before returning to Kannapolis in 2018, Bautista served as the pitching coach with the Barons in 2017 and the Dash in 2016. Prior to his time with the White Sox, the Bani, Dominican Republic, native spent time in the Royals organization. Signed by the Mets in 1981, he had a nine-year career in the majors, where he went 32-42 with a 4.62 ERA, including three saves in 312 appearances.

Armstrong, born in Surrey, British Columbia, will bring his offensive talents back to Kannapolis for the second year in a row as the hitting coach, while previously serving as Kannapolis' manager in 2016. From 2017-18, Armstrong was the hitting coach for the Barons. Before his two-year stint in Birmingham, Armstrong managed Kannapolis and the Great Falls Voyagers (2015). After being drafted by the Atlanta Braves in the 12th round of the 2003 MLB Draft, Armstrong spent time in the Braves, White Sox, and Angels organizations before hanging up the cleats in 2013.

Leyland enters his first season as a coach in the White Sox organization. Last season, Leyland was in the South Atlantic League as the development coach for the Delmarva Shorebirds (Baltimore Orioles), a team that took home the MiLB Team of the Year award. The son of three-time Manager of the Year, Jim Leyland, Leyland served as a coach with the Baysox in 2018. After being drafted by the Tigers in the eighth round of the 2010 First-Year Player Draft, the 28-year old played six seasons in the minors with Detroit (2010-14) and Seattle (2015).

Geck will serve as the head trainer in Kannapolis for his fifth straight season in 2020, marking his 28th season in the White Sox organization. While attending the University of South Florida, Geck received an internship with the White Sox in Sarasota, Florida, which paved the way for almost a 30-year relationship between him and the White Sox.

Childs, a native of Greenville, South Carolina, will enter his first year with the White Sox organization. Previously the performance coach from 2016-19 in the Seattle Mariners organization, Childs received his master's degree from Appalachian State University in 2015 for Exercise Science, with a concentration in Strength and Conditioning. Childs also played college baseball at Wingate University (2008-09) and Lander University (2010-12).

The Cannon Ballers open the gates to the Kannapolis Sports and Entertainment Venue for the inaugural 2020 season on Thursday, April 16th against the West Virginia Power. Season tickets and group hospitality areas are on sale now. For more information on how to be a part of this historic season, please visit www.kcballers.com or contact the Cannon Ballers Ticket Office by phone at 704-932-3267.