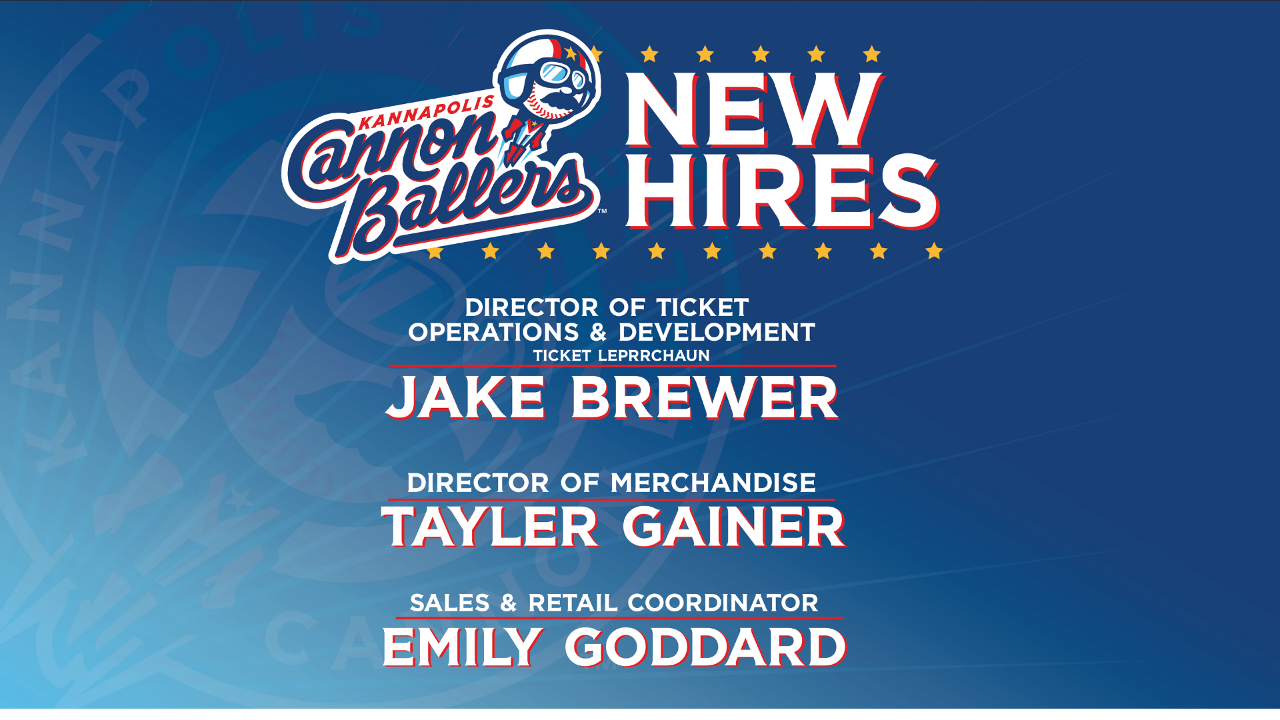 (KANNAPOLIS, NC) - In preparation for their historic first season in downtown Kannapolis, the Cannon Ballers have elevated their operation with a number of exciting additions to the front office. The growth of the staff includes the development of specialized roles within ticket sales and retail operations.

"Elevating the fan experience is the core of our focus this offseason," stated Cannon Ballers General Manager Matt Millward. "The flourishing backgrounds of these three newcomers allow us to make significant strides as we approach our inaugural season at the Kannapolis Sports and Entertainment Venue."

As fans head to the Box Office and enter the gates of the ballpark, they can anticipate a warm welcome from Jake Brewer, the Ticket Leprechaun. Beyond being the Cannon Ballers' "lucky charm," Brewer's role will include overseeing the team's ticket operation and providing key contributions to further enhance a fan-driven experience. A native of Franklin, NC, he joins the Kannapolis staff after spending six seasons with the Gastonia Grizzlies (Summer Collegiate; Coastal Plain League). In addition to introducing the Ticket Leprechaun persona, Brewer served in many different capacities with Gastonia and was ultimately elevated to the role of Assistant General Manager. Brewer was also a part of Fans First Entertainment and assisted with the launch of the Savannah Bananas (CPL).

"I'm excited to be a part of everything the Cannon Ballers are going to bring to Minor League Baseball," said Brewer. "With an exciting new identity and first-class family venue, I look forward to making each Cannon Ballers game a truly unique experience. Within moments of meeting the Ticket Leprechaun, fans will quickly notice our commitment to creating a fun, unique, and welcoming environment."

Making an immediate impact and credited for introducing a new line of Cannon Ballers merchandise, the team is thrilled to introduce Tayler Gainer as Director of Retail Operations. Gainer, a native of Fayetteville, NC, graduated from the University of North Carolina at Chapel Hill with a B.A. in Sports Administration. She comes to the Cannon Ballers after spending nearly three years with USA Baseball. Gainer coordinated a number of retail initiatives for the organization, eventually being promoted to Assistant Director of Retail.

"It has been an unforgettable experience promoting the Cannon Ballers brand to not only the Kannapolis area, but all baseball fans around the country," commented Gainer. "The positive response from the community has been overwhelming and this is just a sampling of the dynamic offerings we will showcase this season."

Rounding out the front office additions, Emily Goddard joins the ranks of the Cannon Ballers full-time staff after spending the last two seasons as a team associate. A recent graduate of Catawba College with a B.S. in Sports Management, Goddard will serve as the team's Sales and Retail Coordinator, contributing to both the ticketing and retail operations.