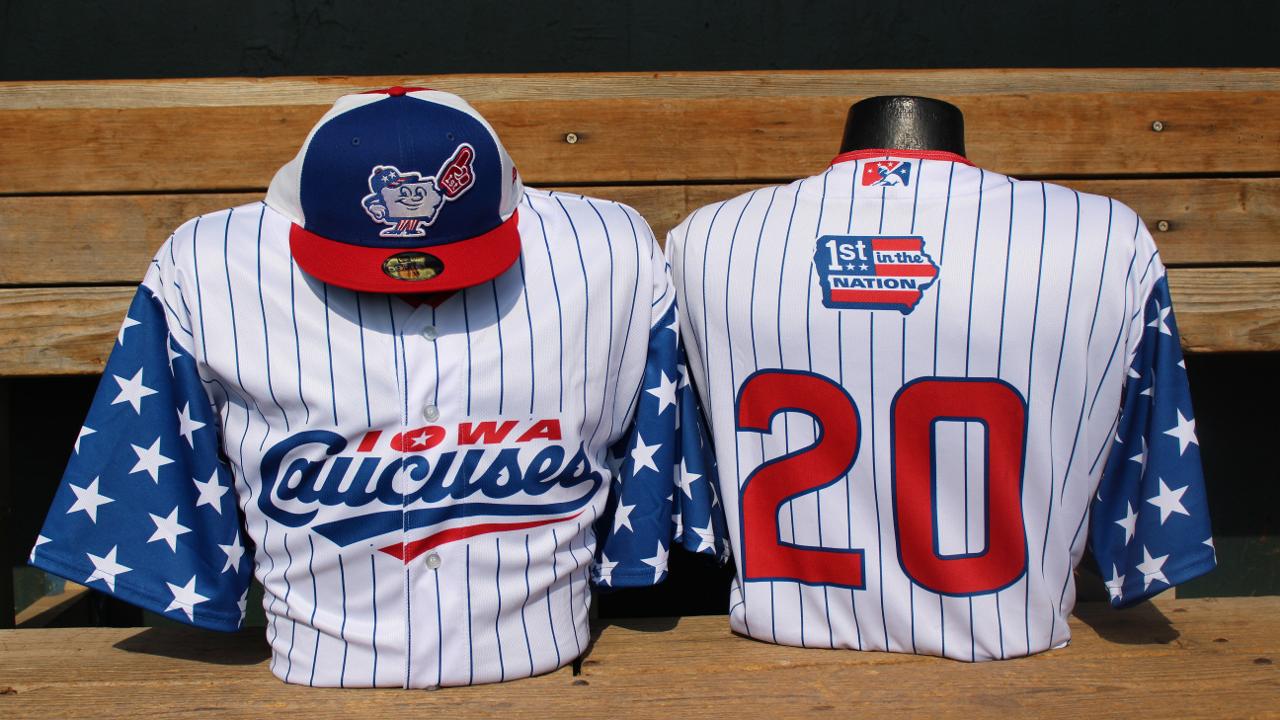 The Iowa Cubs are playing as the Caucuses on Friday, celebrating their state's first-in-the-nation voting status.

On Friday, the Iowa Cubs are assuming an identity that checks off all the boxes.

The Cubs, a Des Moines-based Pacific Coast League entity, are celebrating their state's first-in-the-nation voting status by suiting up as the Caucuses. The actual Iowa caucuses, the first nominating contest of the 2020 presidential campaign, take place on Feb. 3, 2020.

Randy Wehofer, Iowa Cubs assistant general manager, indicated that the idea to play a game as the Caucuses came about "not that long ago in the grand scheme of things."

"We've had a long parade of candidates visit over the years and we're in the capital, where it's front and center," he said. "We put together a timeline to pull something off before the season was over. Got on the horn to [logo designer] Dan Simon of Studio Simon, and talked to New Era about the hats. They gave us a deadline, so we looked at what we needed to do in order to promote and play it. We put our foot on the gas and got to work on it."

The Caucuses' primary logo, featured on the team's caps, depicts an anthropomorphic state of Iowa decked out in a red, white and blue cap while wiggling a foam finger emblazoned with "1st."

"[Simon] did the New Hampshire Primaries [logos]," said Wehofer, referring to the original identity of the New Hampshire Fisher Cats. "We talked at length about that and the ways in which ours would be different. As for having the state as the character itself, that started in a different direction, but [Simon] brought that back to us and we loved it. We tweaked a few things. ... The objective was always to be non-partisan and patriotic, tying a non-sports entity into who we are as a baseball team."

This season marks the first in which the I-Cubs have adopted an alternate identity. Caucuses follows the team's participation in Minor League Baseball's Copa de la Diversión program, which resulted in three games featuring the Demonios (a reference to the Demons, Des Moines' Minor League team from 1925-37 as well as 1959-61).

Prior to the Caucuses, the I-Cubs played three games as the Demonios this season.

"Certainly the Cubs brand is a big part of who we are; we present ourselves as the Major League team of Iowa," said Wehofer. "I don't think we were ever opposed to [an alternate identity] -- it was just a matter of finding the right fit. The Copa program is important no matter where you are in terms of bringing in new fans, and both Demonios and Caucuses are local. They're ingrained in the community and creative, but not too far over the ledge, either. They fit our personality."

The Caucuses logos debuted on Aug. 7, a day before the start of the Iowa State Fair. Wehofer said this was good timing, as the fair is "a place that candidates flock to, to be on the ground amidst the people of Iowa." The team's home of Principal Park has also been a popular stop for this year's crop of Democratic Party candidates, albeit prior to the unveiling of the Caucuses identity. Beto O'Rourke and Joe Biden both stopped by on July 4, and Pete Buttigieg paid a visit on Aug. 21.

"We're not involved in giving any sort of endorsement, but we acknowledge and welcome being part of the process," said Wehofer. "That's what this whole thing is about."

Meanwhile, outside of the political sphere, the Caucuses received an unexpected endorsement from Pearl Jam singer (and noted Cubs fan) Eddie Vedder.

"Right after our [Caucuses] announcement, there was a gun control symposium at the convention center," said Wehofer. "That was something that Eddie wanted to be involved in, so he flew in and afterwards his plane was delayed. He stopped by the ballpark and bought a few Caucuses hats and a few other things, unannounced."

Friday's ballgame will be about more than a temporary new look. Staff from the office of the Iowa Secretary of State will be on hand to register voters or, if applicable, update voter information. The team, in conjunction with this, will give out "I Registered" buttons featuring the Caucuses logo.

"They'll also be providing information about how caucuses work, because it's a little different and both parties have a different format. It's not just filling out a ballot," said Wehofer. "Des Moines is growing quickly with people who, like me, are from somewhere else. They haven't grown up with the process, so there's always a reason for more education."

We are thrilled to partner with @IowaCubs to promote the Iowa Caucuses and #VoterRegistration in a bipartisan fashion this Friday. Hope you can join us at the ballpark. https://t.co/hc5l1MLJaa #BeAVoter #IACaucus pic.twitter.com/s2CQJ5rfxT

While Iowa's caucus will have come and gone by the time Opening Night 2020 rolls around, the Caucuses will remain a part of the team's promotional schedule.

"We're looking at this as a long-term addition to what we're about, not a one-year thing or a one-day thing," Wehofer said. "We'll revisit in the spring, after the caucuses have taken place but when the election process is still front and center. We'll add layers to these games every time we do it.

"The challenging part of all this is staying down the middle, because people never want to keep it there. This is just about our pride in Iowa's place in the process, having fun with it and encouraging people to take part. It's a unique opportunity for us."