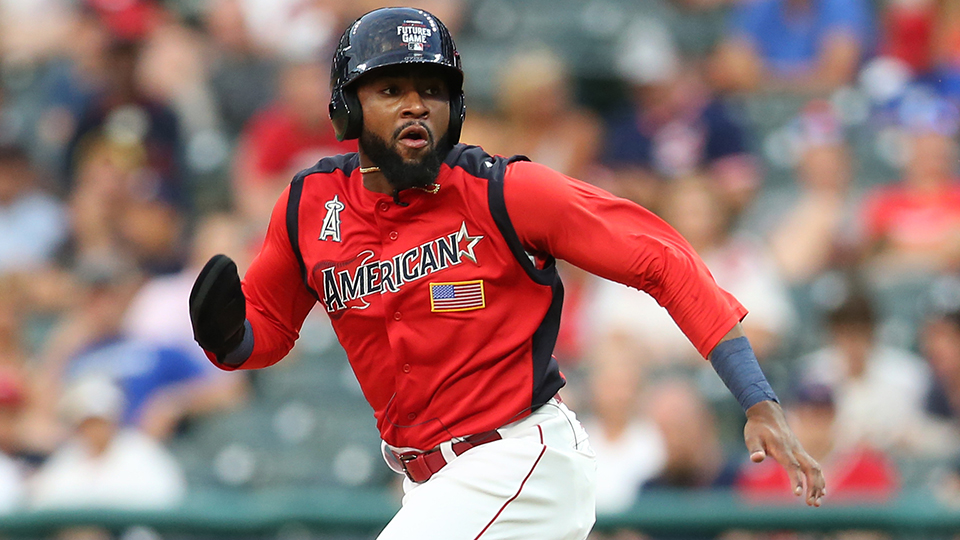 If you take a quick glance at the record of each Angels affiliate, it looks as if the organization had a tough year in the Minor Leagues. Dig a little deeper and evaluate individual performances of key prospects, things look much brighter for a team looking to reach the postseason for the first time since 2014.

Griffin Canning, the system's top pitching prospect heading into the season, got the callup to the Majors and made a positive impact with 18 outings for the big club. Despite an injury that kept him off the field for more than a month to start the season, top prospect Jo Adell got things going in May and performed exactly how you'd expect Jo Adell to perform. He reached Triple-A and is on the cusp of making his debut at the Big A. Along with Jeremiah Jackson's record-tying season in the Pioneer League, the Angels have plenty to look forward to in 2020 and beyond.

And with many of the organization's strong players at -- or getting closer to -- the highest level of the Minors, new manager Joe Maddon could be deploying lineups with plenty of homegrown talent in the not-so-distant future.

Catcher -- Anthony Mulrine, Orem (44 games): Taken in the 25th round of this year's Draft out of Samford, Mulrine made the transition to pro ball look seamless. The 21-year-old mashed five homers and finished with an .820 OPS, which ranked second on the Owlz among players who suited up for at least 40 games. It was consistent with his final college season as he put up an .821 OPS.

Mulrine shined as a defensive stalwart, throwing out 31 of 60 would-be basestealers for an impressive 51 percent clip. He compiled a .987 fielding percentage, and it was hard to ask for more on both sides of the ball from a first-year backstop.

"He came in and took advantage of his opportunity right away," Angels director of Minor League operations Mike LaCassa said. "He showed us from the first day he arrived that he wanted to work and build a rapport with the pitchers. And that rapport gave him a lot of value for us as a defender, as a game-caller, and he had solid offensive production as well."

First baseman -- Jared Walsh, Salt Lake (98 games), Los Angeles (31 games): Walsh was coming off a career year in 2018 and found a way to top it by making his big league debut. The 26-year-old finished with a career-high 36 homers, which was good for third in the Pacific Coast League. In a season in which offensive numbers jumped everywhere in the PCL, he stood out as one of the circuit's best with a league-leading 1.109 OPS.

Walsh took plenty of leaps forward with the bat, blasting five homers in 31 games with the Angels. But the talented two-way player also logged 13 innings on the mound and posted a 4.15 ERA in the PCL. In the Majors, he was stingy in five appearances with a 1.80 ERA and 1.80 WHIP. The now two-time Organization All-Star also was named a PCL end-of-season All-Star.

"He's another one of those players, looking back over the last few years, he's had opportunities and taken advantage of them," LaCassa said. "Each year, he's gotten better and better offensively and defensively. People talk about the run environment in the PCL, but he led the league in OPS by over 50 points -- it wasn't close. Those numbers speak for themselves, the damage he's capable of."

Second baseman -- Jose Rojas, Salt Lake (126 games): The Anaheim native is creeping ever closer to playing in his hometown after a standout year with the Bees. Playing all around the infield, Rojas provided a consistent presence in the lineup with a .293/.362/.577 OPS, 31 long balls and 77 extra-base hits. He logged 10 games with at least three hits, including a pair with four, and ended the campaign with a PCL-leading 297 total bases.

Rojas spent most of his time at second base (39 games) but also got reps at third, first and left field to give the team added flexibility defensively.

"He just has a skill for finding the barrel that isn't something easily taught, that comes to him naturally," LaCassa said. "He spent a lot of time working on his defense as well. He wound up playing games all around the infield: first, second, third and the outfield as well. He's trying to give himself as much value as possible and versatility to help open any doors for him in the future."

Thaiss has a keen eye at the plate and a knack for getting on base. The University of Virginia product drew 59 walks and struck out only 64 times in 79 games at Triple-A. He earned a promotion to Los Angeles in July and played his final 53 games in The Show. There, he blasted eight roundtrippers and amassed a .422 slugging percentage.

Thaiss had not played third before this season but logged 47 games at the position with the Bees and maintained a .924 fielding percentage.

"From the day Matt got into our system, he's had good plate discipline and a strong contact ability," LaCassa said. "This year -- and we knew it was going to come -- he tapped into some more power and he maintained his on-base ability; he reached at almost a 40 percent clip. Matt had a challenge this year being thrown at third base. He took that and ran with it. He's the type of player who wants to put the work in and wants to put in extra work."

Shortstop -- Jeremiah Jackson, Orem (65 games): Jackson's second year in the organization proved to be a breakthrough campaign. The 19-year-old tapped into his power and matched the Pioneer League record with 23 homers. He posted six multi-homer efforts, including the circuit's only three-homer game on Aug. 15 against Idaho Falls.

With all the power came plenty of accolades, including midseason and end-of-season All-Star nods and the Top Star award at the All-Star Game against the Northwest League. As an 18-year-old in 2018, Jackson struggled with Orem, batting .198 with a .656 OPS. A year later, he put up a .266/.333/.605 line. It was his work in the first half of the year, LaCassa said, that helped fill the trophy case.

"Going through extended spring training is a challenge for many players," LaCassa said. "The growth that Jeremiah showed, both on and off the field in that environment, we knew when he got to Orem that he was ready to take off. From day one in that league, he never slowed down."

Jo Adell, Salt Lake (27 games), Mobile (43 games), Inland Empire (six games): In a touch of bad luck, Adell suffered hamstring and ankle injuries in one fell swoop in Spring Training and was forced to miss 10 weeks. But he came back from the injured list and looked no worse for wear.

After a brief stint in the California League, Adell returned to Mobile and shined with a .308 average and .944 OPS, collecting 49 hits in 43 games. It came as little surprise that he represented the organization at the All-Star Futures Game for the second year in a row. He went 1-for-2 and scored a run in the 2-2 tie with the National League.

Over the final third of the season, the 20-year-old saw his first action in the PCL, where he hit .264 in 27 games. Adell also recorded a career-high four outfield assists.

"It was not what you were hoping to occur in March when he pulled up at second base," LaCassa said. "But Jo took advantage of it, working really hard with our rehab staff, I think that he grew a lot from it. He wanted to get out there every day, he wanted to run and jump and push himself. When he was able to get back on the field, he took off and didn't miss a beat."

Taylor Ward, Salt Lake (106 games), Los Angeles (20 games): After a cup of coffee with the Angels at the end of 2018, Ward returned to Triple-A and parlayed his time there into a career year. He hit .306, produced the second-best on-base percentage in the league (.427) and finished third on the team with 27 homers. His 1.011 OPS ranked third on the club as he accumulated 62 extra-base hits.

Video: Ward homers off the batter's eye for Bees

Still only 25, he earned a few promotions to the Angels and totaled 20 games with the big club. Ward also represented Salt Lake at the Triple-A All-Star Game.

Brennon Lund, Salt Lake (96 games): Lund made the most of his first opportunity at Triple-A, finding ways to continually make contact and get on base. He ended the year with a .350 OBP and roped a career-best 26 doubles in 96 games with the Bees. Despite not reaching double-digit homers, he ended the season with a .805 OPS.

Lund saw time at all three outfield spots and recorded six assists and a .967 fielding percentage.

DH/Utility -- Gareth Morgan, Inland Empire (44 games), Mobile (27 games), Modesto (eight games): Although he got off to a tough start when he was released by the Mariners in mid-April, Morgan turned things around after he was picked up by the Angels and assigned to the 66ers.

Morgan tapped into his power and mashed 20 homers while producing a .645 slugging percentage in 44 games with Inland Empire. With 12 homers and a 1.013 OPS in July, he earned California League Player of the Month honors.

Right-handed starting pitcher -- Kyle Tyler, Burlington (21 games, 16 starts), Inland Empire (four games, two starts): After an up-and-down pro debut with Orem, Tyler started the season in the Midwest League and dominated. If he had enough innings to qualify, he would have led the circuit with a 2.64 and ranked third with a 1.05 WHIP.

"For Kyle, it comes down to his feel to pitch," LaCassa said. "He has advanced feel plus command of his repertoire, and when you're able to put your stuff in the spots that you want to with consistency, that's going to make a tough at-bat on anybody."

Left-handed starting pitcher -- Hector Yan, Burlington (26 games, 20 starts): A full-season debutante in 2019, Yan flashed his plus stuff for the Bees. A three-pitch mix enabled him to keep Midwest League foes off-balance, helping him compile a 3.39 ERA with 148 strikeouts over 109 innings (12.2 per nine innings).

The native of the Dominican Republic didn't slow down in the second half, notching a 3.32 ERA and 1.06 WHIP over his final 59 2/3 frames.

"It was an exceptional year for Hector. He has grown tremendously as a player and as a person on and off the field," LaCassa. "On the field, we saw his velocity tick up and he's refining the command of all his pitches, I think resulting in a 32 percent strikeout rate in that league. And he's a leader, he's a leader for that pitching staff."

Relief pitcher -- Isaac Mattson, Mobile (24 games), Inland Empire (eight games), Salt Lake (five games): Wherever he was in 2019, Mattson demonstrated pure dominance out of the bullpen. He spent the bulk of his time in Mobile, where he struck out 61 over 43 2/3 innings while logging a 2.68 ERA and 0.98 WHIP.

Across the three levels, Mattson had a 2.33 ERA, held opponents to a .184 average and struck out 45.2 percent of the batters he faced.