Legend has it: Vibes get spooky for Copa 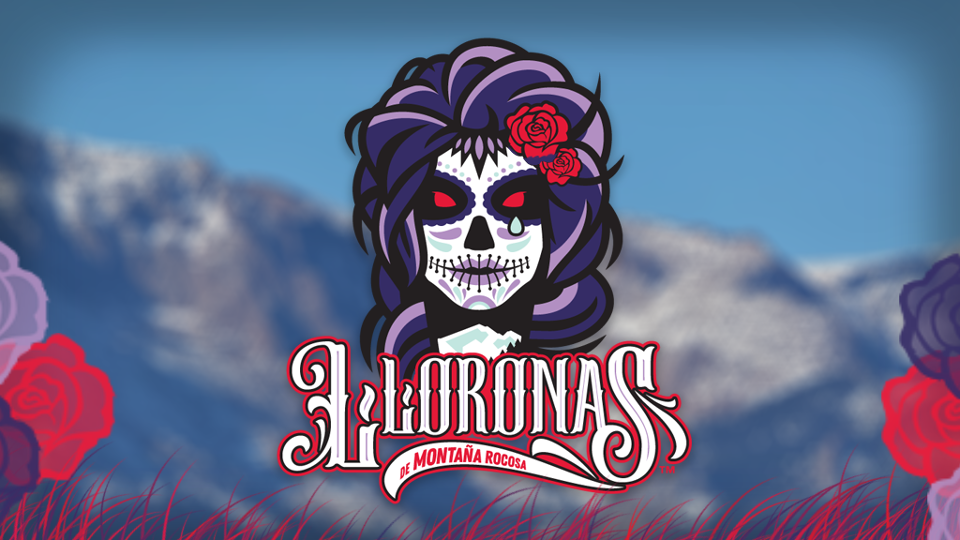 In 2020, the Rocky Mountain Vibes will be one of 22 teams participating in Minor League Baseball's Copa de la Diversión program for the first time. Out of all these teams, their vibe is the spookiest.

The Vibes -- Rookie Advanced affiliate of the Milwaukee Brewers -- will suit up as the "Lloronas de Montaña Rocosa" during a four-game homestand from July 24-27. This identity pays homage to La Llorona, the famous "weeping woman" of Mexican oral legend.

As the story goes -- and there are many variations -- La Llorona is a ghost who, when she existed in corporeal form, was named Maria. One night, driven to a jealousy-induced fugue state by the cruel behavior of her husband, she drowned her children in a river. As the Vibes explain on their Copa de la Diversión page, La Llorona is a "cursed ghost mother, dressed in a white gown, forsaken to roam rivers and creeks throughout the Southwest in search of her lost children." Lloronas de Montaña Rocosa, therefore, "pays tribute to popular Hispanic folklore and other spooky stories of rivers sprinkled throughout the region."

The Vibes, a Pioneer League team, played their first season in 2019 after relocating from Helena, Montana. (Prior to that, the team's home of Colorado Springs had hosted a Pacific Coast League team called the Sky Sox.) Vibes president and general manager Chris Phillips said that joining Copa de la Diversión, Minor League Baseball's Hispanic fan engagement program, offered a chance for his team to reach out to a large (and largely untapped) demographic.

"The Latinx population in this community is about 18 percent, which is pretty strong," he said. "But we've never done anything specifically to market to that demographic. Shame on us. But there was no way we could have been involved [with Copa] last year with the [Vibes] rebrand. Even this year, I was a little concerned. Vibes is still fresh, and we didn't want any brand confusion."

After deciding to participate in Copa, Phillips reached out to a number of business owners and media partners in the greater Colorado Springs region. He was in search of a team name and corresponding logo that would resonate with the Hispanic community.

"The teams that have had a lot of success [with Copa] are the teams that put a lot of thought into it," he said. "You don't want to just make your Copa name the Spanish version of your regular name. We were interested in things that tied into folklore, things specific to the culture that you remember from when you were a kid. And in talking with the president of the Councilio, the Hispanic Chamber of Commerce in Colorado Springs, he said, 'The first thing that comes to my mind is the scary story our mom told us about La Llorona.'"

That conversation, between Phillips and Hispanic Business Council president Joe Aldaz, proved to be crucial.

"La Llorona is part of our culture, specifically in the southwest portion of the United States," said Aldaz. "The folklore of the weeping woman who had lost her children, you learned it growing up in Hispanic and Latino culture. You might get it from your grandparents: 'Don't go out at night or La Llonora is going to get you.'"

"I was thinking, 'Oh, that's cool,' but right at that time there was a movie that came out. What are the odds?" added Phillips, referring to the February 2019 horror film "The Curse of La Llorona." "We were all freaked out, thinking there was no way we could use La Llorona from a legal standpoint. But we were working with Minor League Baseball's legal team and they said it was OK. We went through the process and, delving into it more, we found that, not that it needed to, but that it ties into the Vibes brand a little bit."

The Vibes name, a spin-off of a proposed Happy Campers identity, speaks to the feeling, or "vibe" of living in Colorado. It is deeply rooted in outdoor activities and camping. The team's mascot is an anthropomorphic s'more named Toasty.

"It's like, you gather around the campfire, telling ghost stories, and the story of La Llorona comes up," said Phillips. "There have been sightings of La Llorona in Colorado, so we've got regional relevance."

The Lloronas de Montaña Rocosa logos were created by Minor League Baseball's in-house graphic design team. Phillips said that, "after a lot of back and forth," a suitably spooky logo was created to everyone's satisfaction. He also noted that branding around a female character was a "unique and intriguing element." (As it turned out, the Vibes were one of two Pioneer League teams to adopt a female-fronted Copa identity. The Idaho Falls Chukars are the Madres, which is, in part, a nod to their days as a San Diego Padres affiliate.)

The Vibes held a Lloronas de Montaña Rocosa unveiling event at Atrevida Brewery on Thursday evening, which included the release of a Llorona specialty beer. Atrevida, the only Hispanic-owned brewery in Colorado, is helmed by Latina head brewer Jessica Fierro and her husband, Rich.

"They've been amazing, super-welcoming and a good sounding board for ideas," Phillips said. "They make sure we're going about things the right way. Their new specialty beer, we'll have that at the ballpark during Copa games."

Those games won't take place for more than eight months. In the meantime, Phillips and his staff will work to market their new Copa identity while making new connections with their area's Hispanic fans.

"I think it's very important that they took the initiative to reach out to the Hispanic Chamber and wanted to be respectful of Hispanic culture," said Aldaz. "If they develop this the right way, market it the right way, I think it could be pretty effective. The Latino population in Colorado Springs and the Pikes Peak region, that's 18 percent of 600,000 to 700,000 people. The Latino population here is the fastest growing segment and will continue to grow. As Minor League sports grow here in Colorado, it's important that the Vibes establish a foundation for now and into the future."

"Not every team gets to do this," said Phillips. "We'll make the most of it."