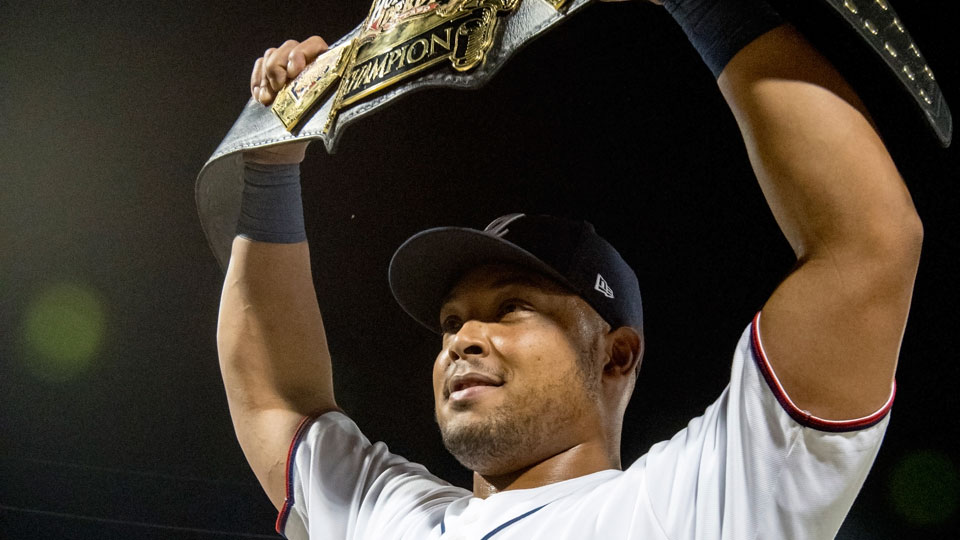 EL PASO, Texas -- Yasmany Tomas, the only contestant who had never appeared in a Minor League All-Star Game -- and the only one with more career Major League home runs (48) than roundtrippers in the Minors (41), slugged a total of 59 taters to take home the Triple-A Home Run Derby belt at Southwest University Park on Monday.

The Reno outfielder led the Pacific Coast League to the title by edging Scranton/Wilkes-Barre first baseman Mike Ford, 19-18, in the final round.

"It doesn't matter if it's Major League or Minor League, whatever competition I'm in or on a daily basis, I'm going to give it my all," said the Cuba native, who last played for the D-backs in 2017. "I feel physically fine. I feel I've matured a lot and I feel I've done everything I've had to do."

Tomas, who has 25 homers for the Aces, slugged 20 in each of the first two rounds to get past Las Vegas' Jorge Mateo -- Oakland's No. 8 prospect -- and hometown favorite Ty France of the Chihuahuas, the 27th-ranked Padres prospect.

"I've been here the last two years and every night the fans are cheering us on, supporting us," said France, who saw his first Major League action earlier this season. "They've been with us every step of the way, so it's a lot of fun to have them be a part of this with us."

Ford got past Columbus' Brandon Barnes with 15 long balls and a tiebreaker in the first round before launching 22 in the second round to beat Gwinnett's Travis Demeritte to reach the final. But Tomas, who bashed four home runs in one game in Tacoma on May 20, before going yard in each of the next three games in El Paso, appeared destined to win the contest from the early rounds.

"The last time I was in El Paso was the last time I thought I was going to be here," said Tomas. "But the opportunity presented itself for me to come back and participate in a very competitive competition."

Another winner was El Paso, which welcomed a jewel event to a city that has watched a revitalized downtown come to life around its ballpark. The Triple-A All-Star Game will take place at 7:05 p.m. MT on Wednesday.

"I'm thrilled that we're able to put on this nationally televised event for our city," said Chihuahuas senior vice president and general manager Brad Taylor. "I think El Paso is a secret, frankly, that not a lot of people know about. They think they know stuff about El Paso, especially recently with stuff in the news. But until you come here and you see the sincerity, the generosity, the warmth and graciousness of the people who live here and work here. I think it's one of the reasons we've been successful here for five-and-a-half seasons. They've really grabbed on to what we're doing here and they've made it more fun for us to keep doing it and doing it at a higher level here."