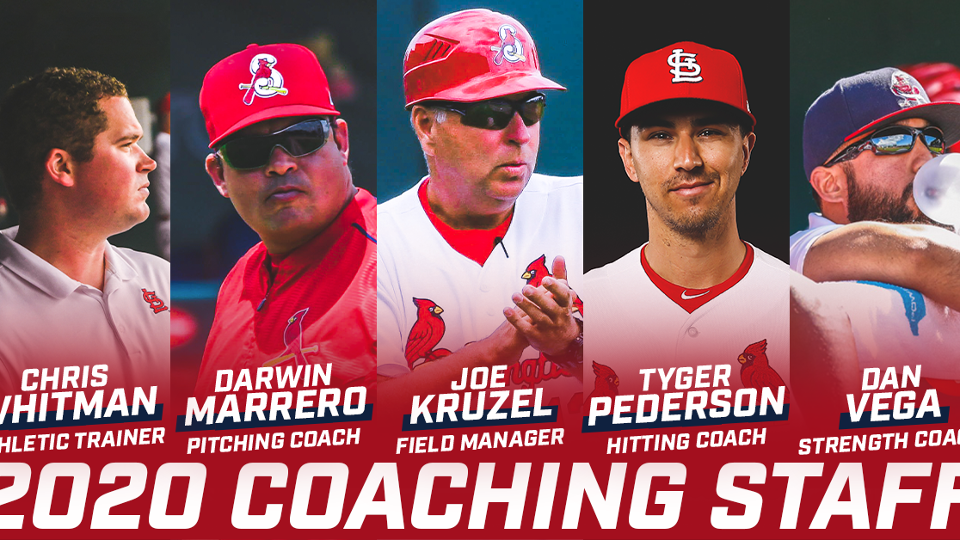 SPRINGFIELD, Mo. -- The St. Louis Cardinals have announced that Joe Kruzel will return for a second season as the manager of the Springfield Cardinals in 2020.

Kruzel, 54, enters his 13th season with the Cardinals and eighth year as a manager within the organization. In his first year with Springfield, Kruzel oversaw the development of a Springfield roster that included St. Louis Cardinals Minor League Player of the Year and Texas League Player of the Year Dylan Carlson and St. Louis Cardinals Minor League Pitcher of the Year Angel Rondon. He's had previous managerial stints with State College (Low-A) in 2017-18, Peoria (Low-A) in 2014-16 and Johnson City (Rookie) in 2013.

Kruzel has led his teams to two postseason appearances as a manager within the Cardinals organization and holds a career managerial record of 429-420, including one season (2007) as a manager of the Billings Mustangs while with the Cincinnati Reds organization. Kruzel's career in professional baseball spans 15 years, starting out with the Reds for two years before moving to the Cardinals as a hitting coach with the Quad City River Bandits (High-A) in 2008, where he remained until being hired as manager in Johnson City in 2013.

"Joe's impact in his first year with us as manager wasn't just felt on the field but was felt and noticed throughout the Springfield community," Springfield Cardinals Vice President/General Manager Dan Reiter said. "He set a great example for how a manager can use his platform to lift up the gameday experience for our fans in a way that stuck with people even after leaving Hammons Field. We really look forward to having him back for a second season at the helm."

"We're also so excited to have a familiar face in Darwin back again as our pitching coach and are really looking forward to welcoming Tyger as this year's hitting coach."

Marrero, 39, is beginning his eighth season in the Cardinals organization and third with Springfield. Last season, Marrero helped develop and push Springfield RHP Angel Rondon to the St. Louis Cardinals Minor League Pitcher of the Year and a league-best 3.21 ERA. Marrero's career with St. Louis began as pitching coach for the Gulf Coast League Cardinals (Rookie) from 2013-14, followed by the same role with the State College Spikes (Class-A) from 2015-17.

Prior to joining the Cardinals system, Marrero was Pitching Coach for the Sioux City Explorers in the American Association (2008). In 2005, he was Pitching Coach for the Capitales de Quebec in the Can-Am League while also throwing 38 innings as a player. Marrero's playing career spanned seven seasons from 1998-2004 with the Montreal Expos organization, attaining his highest level at Double-A with the Harrisburg Senators in 2002 and 2004.

Pederson, 31, will begin his first season as Springfield's hitting coach and second in the Cardinals organization. Most recently, Pederson was the Hitting Coach for the Palm Beach Cardinals (High-A) in 2019.

Other coaching experience includes managing the Duluth Huskies in 2018, leading the team to the Northwoods League Division Championship while setting franchise records in wins, runs scored and stolen bases. Before that, he worked as assistant coach for Cal Poly-San Luis Obispo's baseball team in 2018 and as the graduate assistant coach at Hawaii Pacific in 2017. Pederson was a coach in Taiwan for Major League Baseball and managed the Orange County Riptide to a California Collegiate League championship in 2017, earning CCL Manager of the Year Honors.

The former multi-sport standout at Palo Alto High School player college baseball at the University of the Pacific, where he was team captain his senior year playing second base. In 2013, the Los Angeles Dodgers selected him with their 33rd round pick in the June 2013 First-Year Player Draft. Pederson played one year of professional baseball in the Arizona League before competing in Independent League baseball from 2014-16 with the San Rafael Pacifics and Vallejo Admirals.

Pederson is the son of former Dodgers outfielder Stu Pederson, and the older brother of Dodgers All-Star outfielder Joc Pederson. His sister, Jacey, plays soccer for UCLA. He resides in Palo Alto, Calif.