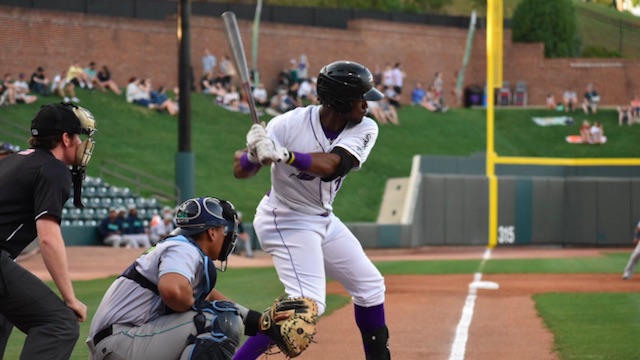 Adolfo went 2-for-4 with a home run and two RBIs. (Clinton Cole/FutureSox)

WINSTON-SALEM, N.C. (May 3, 2018) - Luis Basabe and Micker Adolfo each blasted a home run to lift the Dash to a 5-3 victory over Lynchburg and clinch a series sweep at BB&T Ballpark on Thursday.

In the eighth, Adolfo crushed his Carolina League-leading sixth home run of the season to dead center to give the Dash an insurance run.

Dash right-hander Drew Hasler (1-0) picked up his first win of the season, tossing three innings in relief. Lynchburg tagged him for run in his first inning of work, but the right-hander settled down in the fifth, retiring the side in order on just eight pitches. He finished the night allowing one run on three hits while striking out two and walking a pair.

Zach Thompson added two scoreless frames out of the bullpen, and Mike Morrison shut the door in the ninth to pick up his first save of the year. With the win, Winston-Salem earns its first home sweep of the season.

Lynchburg got on the board in the opening frame, when Li-Jen Chu singled off of Dash starter Kyle Kubat to drive in Mitch Longo.

But, Winston-Salem promptly tied the score in the bottom of the first. Alex Call reached on a fielder's choice and moved to second on an error by Hillcats second baseman Alexis Pantoja. Then, Adolfo, the reigning Carolina League Player of the Month, delivered an RBI single to tie the game at one.

The Hillcats retook the lead in the third on a single from Conner Capel and an RBI double from Chu. Starting in place of Jimmy Lambert, who was scratched due to illness, Kubat went three innings, allowing two runs on six hits while striking out two. Two frames later, Basabe's long ball put the Dash in front for the rest of the night.

Winston-Salem begins a three-game series with the Buies Creek Astros at BB&T Ballpark on Friday at 7 p.m. Left-hander Tanner Banks (0-1, 5.40 ERA) makes his second start of the season for the Dash in the series opener. Pregame coverage begins at 6:45 p.m., and fans can catch all of the action on wsdash.com/broadcast, MiLB.tv and the TuneIn Radio App.

The Dash's series opener against the Astros will be Star Wars Night at BB&T Ballpark, featuring real-life Star Wars characters in attendance, brought to you by Carolina Garrison/501st Legion.

Meanwhile, the Dash will wear "Winston-Salem Rayados" jerseys on Sunday, as part of the team's participation in Minor League Baseball's "Copa de la Diversión," or "Fun Cup," initiative, a season-long event series specifically designed to embrace the culture and values that resonate most with participating teams' local Hispanic/Latino communities. For more information, call the Dash at (336) 714-2287 or visit wsdash.com.