Event to begin at 4 p.m. on First Street, conclude with fireworks show 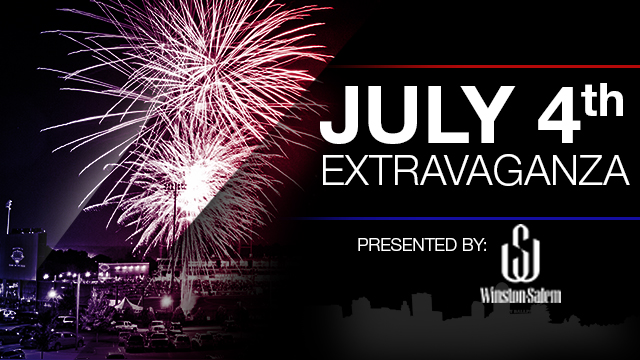 WINSTON-SALEM, N.C. (June 16, 2016) - The City of Winston-Salem and the Winston-Salem Dash are proud to present the annual Independence Day extravaganza at BB&T Ballpark on Monday, July 4. The fun begins at 4 p.m. on First Street and concludes with Winston-Salem's official Fourth of July fireworks show following the Dash's 7 p.m. game against the Myrtle Beach Pelicans.

First Street will be open to the public between Peters Creek Parkway and Green Street, and attendees will enjoy music, Dash inflatables and several food trucks in this area. Beer will also be on sale throughout the afternoon.

BB&T Ballpark's gates open at 5:45 p.m. in advance of the Dash game. An extended fireworks display will follow the game, and there will be a special Kids Run the Bases, presented by Fleet Feet.

Both paid and free parking will be available throughout downtown, and all of these locations will be less than a half-mile from BB&T Ballpark's entrance. A full parking map for the Fourth of July is available here. Fans should expect delays beginning at 5:30 p.m. due to work and ballpark traffic.

"Our Fourth of July game has become a marquee event in Winston-Salem," Dash team president Geoff Lassiter said. "We are excited about an expanded celebration, and we are thankful that the City of Winston-Salem has helped us transform the game into an exciting event for our community."

"Independence Day is not complete without fireworks," Mayor Allen Joines said, "and the Winston-Salem Dash has a justly earned reputation for having the best fireworks in Winston-Salem, Forsyth County and beyond. The city is proud to partner with them to ensure our citizens have a safe and accessible means to enjoy this Fourth of July tradition."

Tickets are still available, though the game will sell out. The Dash's Fourth of July home games over the last two seasons have drawn the two highest attendances in BB&T Ballpark's seven-season history.