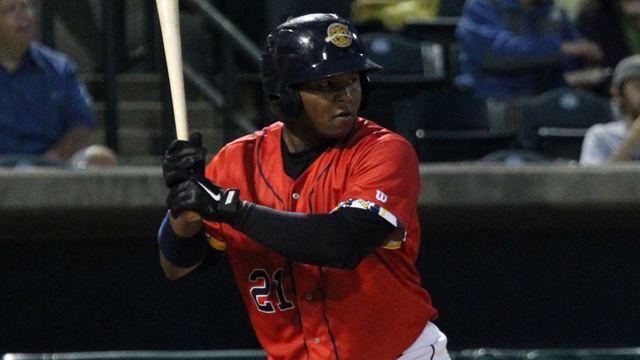 CHARLESTON, SC - Eduardo de Oleo hit a go-ahead grand slam for the Charleston RiverDogs in the fourth inning, but the Greenville Drive scored seven runs, all with two outs, in a 7-5 Drive victory in front of 3,982 fans at Joseph P. Riley, Jr. Park in South Atlantic League action.

The RiverDogs have a 27-25 record while the Drive moves to 26-25, clinching a 2-2 series split. Brady Lail, who had won his last six starts, did not factor in the decision for the first time since Charleston's 8-7 comeback win against the Rome Braves on April 17.

Jantzen Witte homered in the first inning to put Greenville in front by a 1-0 margin. With two outs and an 0-2 count, Witte cleared the left field scoreboard against Lail for the early lead.

Greenville's advantage increased to 2-0 in the top of the fourth inning. Manuel Margot led off the inning with a single and moved to third base after a pair of groundouts. A wild pitch scored Margot to give the Drive a two-run lead.

Charleston rallied for five runs to take a 5-2 lead in its half of the fourth. Dustin Fowler doubled to break up Joe Gunkel's perfect game bid. Fowler scored on a one-out single by Aaron Judge. Later in the frame, de Oleo connected on a 3-2 pitch for a grand slam to left-center field that put the RiverDogs in the lead.

Lail was in line for the victory until the Drive rallied in the sixth inning. After Jordan Cote picked up two quick outs, Forrestt Allday received a walk and Tzu-Wei Lin followed with a double. Both runners scored during a single from Witte, cutting the deficit to 5-4. Witte advanced to third base during Carlos Asuaje's single and scored on a game-tying single by Wendell Rijo that tied the contest.

The tie was broken by Greenville in the eighth inning on a blast from Asuaje. Charleston's Chris Smith induced a groundout and recorded a strikeout prior to Witte's inning-extending walk. Asuaje hit a first-pitch home run to right field, giving the Drive a 7-5 advantage to win the game.

Jonathan Aro earned the win after four scoreless and hitless innings of relief. Aro's record is 1-0 while Smith drops to 1-1 with the loss. Greenville also had 14 of the 17 total hits in a close contest. All three RiverDogs hits came in their go-ahead rally in the fifth.

BALLPARK FUN: Firefighters Appreciation Night was celebrated at The Joe, which was also honored by official proclamations from the cities of Charleston, North Charleston, Summerville, Goose Creek, and Walterboro. Firefighters were also raising money for the MUSC Children's Hospital Burned Children's Fund. It was Guaranteed Wins-Day, so all fans in attendance may use their tickets to get into the next Wednesday home game for free.

COMING UP: Charleston hosts a four-game series against the Asheville Tourists, starting on Thursday at 7:05pm. RiverDogs RHP Rookie Davis (2-4, 4.93 ERA) is scheduled to pitch against Tourists RHP Konner Wade (3-5, 5.64 ERA). It is another Budweiser Thirsty Thursday, presented by 95SX with $1 drafts in the Ashley View Pub. ISHPI sponsors Military Appreciation Night, which includes free tickets for all active and retired military members and their immediate families by showing a military ID at the box office. For the occasion, the RiverDogs have partnered with Palmetto Brewery to serve Homefront IPA with all proceeds benefitting Operation Homefront. Tickets may be purchased at the Riley Park Box Office, (843) 577-DOGS (3647) or on-line at www.riverdogs.com. If fans cannot make it to the ballpark, they are encouraged to tune in to all the action this year both home and away worldwide on www.riverdogs.com and locally on 1250 WTMA, the new radio home for RiverDogs baseball.