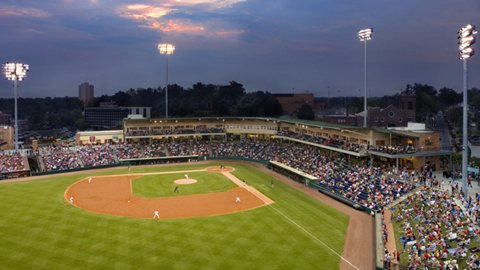 In the top of the first inning, Jake Cave doubled and later scored on a passed ball to put Charleston up 1-0 early.

Greenville tied the game at 1-1 on three hits and a hit by pitch in the bottom of the first inning, but stranded the bases loaded to keep it tied.

In the bottom of the second the Drive got right back at it and added another run, this time on a hit, a wild pitch, and a couple errors to take a 2-1 lead. Once again Greenville stranded two men in scoring position though and couldn't add more damage.

Greg Bird doubled to begin the fourth inning for the Dogs and later scored on a double play ball to tie the contest at 2-2.

In the fifth is where the Charleston bats really came alive.

With two outs and runners at the corners, Jose Rosario worked a 10 pitch at-bat and cranked his second homer of the year over the left field wall. The three run blast gave the visiting team a 5-2 lead.

Greenville scored twice on three hits in the bottom of the fifth to cut it to 5-4.

Dante Bichette, Jr. quickly extended the RiverDogs' lead back to three runs with a towering two-run, opposite field homer in the top of the sixth. The tenth of the year for Bichette, Jr. made it 7-4 Dogs.

Daniel Aldrich knocked in another run later in the frame for Charleston to make it 8-4 in the middle of the sixth.

The Drive cut it to 8-6 with a couple runs in the bottom of the sixth, but Rosario's second homer of the night, a solo shot, put Charleston up 9-6 for good.

John Brebbia spun two scoreless innings to close it out for the RiverDogs and collect his first save of the season.

Starter Daniel Camarena came up one out shy of factoring in the decision after he tossed 4.2 innings and allowed four runs, three earned, on seven hits, one walk, and seven strikeouts.

Righty Kelvin Castro threw 2.1 innings, struck out three, and allowed two runs on three hits. He earned the win to go to 1-0.

Justin Haley started for Greenville and earned the loss. He gave up five runs on six hits and fanned four. His record now stands at 7-10.

Reliever Gerardo Olivares also got roughed up by the RiverDogs to the tune of four runs, five hits, and two homers in two innings of work.

COMING UP: Game two of this three game series is Tuesday night at 7:05. Charleston will send out LHP Eric Wooten (1-1, 1.74 ERA) and Greenville will start with RHP Francisco Taveras (2-4, 6.61 ERA). Fans can listen to the game live locally on ESPN Radio 910AM or online at www.riverdogs.com.