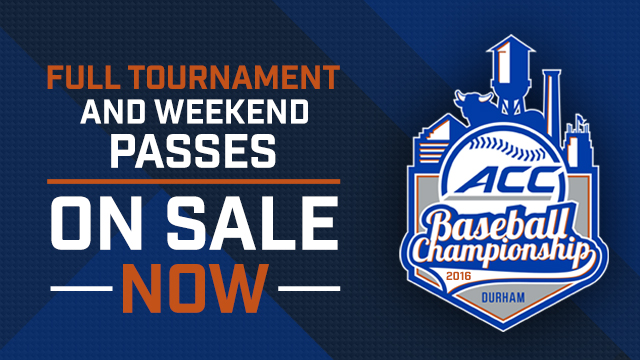 Full tournament passes and weekend packages for the 2016 Atlantic Coast Conference Baseball Championship, scheduled for May 24-29 at Durham Bulls Athletic Park, are now on sale.

Full tournament passes are available for $150. The pass includes tickets to all 15 tournament games, including the championship on Sunday. Group and corporate tickets are also available. A weekend package, which includes Friday night's game, all three games on Saturday, and Sunday's championship, is available for $50.

This season is the second year of a four-year agreement for the event to be held in Durham. The 2016 tournament will showcase the top 10 ACC teams and will feature two games on May 24, followed by three games per day in a round-robin format from Wednesday through Saturday, May 25-28. The championship game between the two pool winners will be played on Sunday at Noon on ESPN2.

The ACC Baseball Championship annually features many of the nation's top-ranked teams. The ACC placed seven teams in the 2015 NCAA Championship field, tied for the most in the country. A total of 20 ACC squads have reached the College World Series over the past decade. Eight teams enter the 2016 season ranked in preseason polls.

Durham Bulls Athletic Park underwent a $20 million renovation just two years ago, transforming it into one of the premier minor league ballparks in the country. The stadium features the 5,000 square foot PNC Triangle Club, an upscale space that provides a whole new level of exclusivity for premium ticket holders and groups.

In addition to HD video board displays, numerous group picnic areas and added concessions, the DBAP is highlighted by Jackie's Landing, a 10,000 square foot social space along the first base line. The area, which gives fans a view of Downtown Durham over the stadium, features themed food and beverage stands in an open-air environment.

The ACC Baseball Championship has been held in Durham nine times previously, including four of the past seven years. Last year, a championship game record crowd of 9,759 saw Florida State defeat NC State for the league title. The total attendance of 64,140 ranked as the third highest in tournament history.