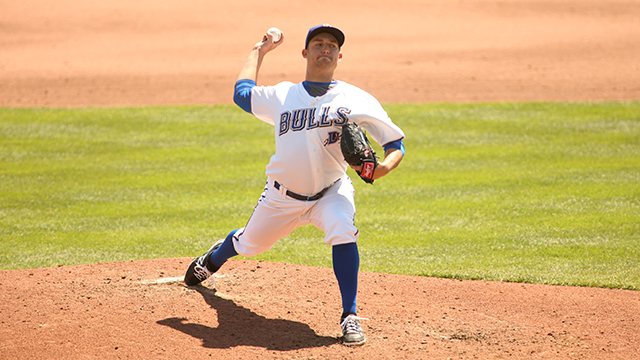 TOLEDO, OH - The Durham Bulls pitched their fifth shutout of the season en route to a 7-0 win over the Toledo Mud Hens Wednesday morning at Fifth Third Field.

Right-hander Matt Andriese (5-3) earned his fourth win in as many starts, tossing seven frames while allowing just three hits, striking out six and walking one. Southpaw Adam Liberatore and righty Jake Thompson each chipped in with a perfect inning of relief to preserve the Bulls' first shutout since May 3rd.

Durham (32-22) got on the board early, scoring a pair of runs in the first inning. Leadoff man Hak-Ju Lee singled to lead off the ballgame before scoring on the very next play when Jayson Nix doubled him home. Later in the frame Nix stole third base, and then came around to score on the errant throw down the line.

In the second the Bulls struck again as Mike Fontenot singled, advanced to third on double by Curt Casali and scored on a single to right field by Robby Price for a 3-0 advantage.

The Bulls continued to chip away at the Mud Hens (24-29), as in the fifth frame they scored when Mikie Mahtook drove in Nix, and later scored himself on a throwing error by the catcher. In the seventh Wilson Betemit singled home Nix, before Casali closed the scoring in the eighth by cracking a solo homer to left field for his first career Triple-A home run.

Mahtook and Casali led the Bulls' 12-hit attack, each finishing 3-for-4, while Nix went 2-for-4 with three runs scored.

The Bulls wrap up their eight-game road trip Thursday with the finale of their four-game set against Toledo. RHP Nathan Karns (3-2, 4.96) gets the ball for the Bulls opposite LHP Duane Below (3-1, 4.30) for the Mud Hens. First pitch is scheduled for 6:30 p.m.

BULL-et Points: Andriese's win marked the first time in his career he's won four straight starts… Mahtook has now compiled four straight multi-hit games…18 of Liberatore's 22 appearances this season have been scoreless… The Bulls are 6-1 over the first seven games of their road trip.