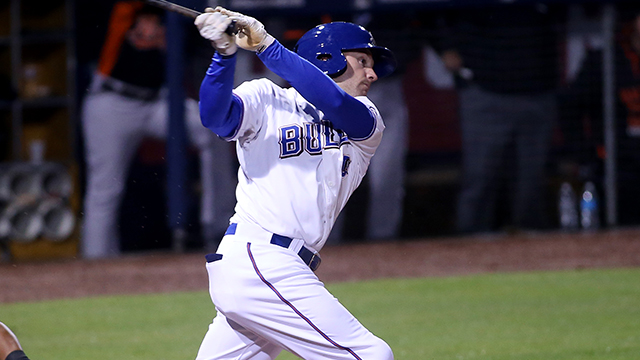 In the second inning Durham (34-26) struck first with three runs. Luke Maile led off the frame with a single, before Hak-Ju Lee followed by bunting for a hit. After a fly out and a strikeout, Brown then launched a three-run homer into the seats in right-centerfield as the Bulls took a 3-0 lead.

The IronPigs (21-39) struck back with a run in the fourth as Domonic Brown singled to lead off the frame, and advanced to third base a batter later on an error. Brown then came around to score on an RBI groundout from Chris McGuiness to cut the Durham lead to two.

In the sixth the Bulls erupted for four runs though, all coming across to score with two outs. First, Eugenio Velez scored on an error, before Ryan Brett drove home Leonardo Reginatto for the inning's second run. Brown then struck again, launching a two-run homer to centerfield for a 7-1 Durham advantage.

The visitors made the game interesting in the eighth, plating three runs on four hits off the rehabbing Kirby Yates, but the 'Pigs would get no closer than 7-4.

Brown led the way offensively for the Bulls, finishing 2-for-4 with two runs scored and five RBIs, while Taylor Motter, Luke Maile and Reginatto all finished with two hits apiece.

The Bulls go for the sweep of the three-game set Wednesday when they send LHP Jordan Norberto (1-2, 5.63) to the mound opposite LHP Anthony Vasquez (3-1, 1.64) for Lehigh Valley. First pitch is scheduled for 1:05 p.m.