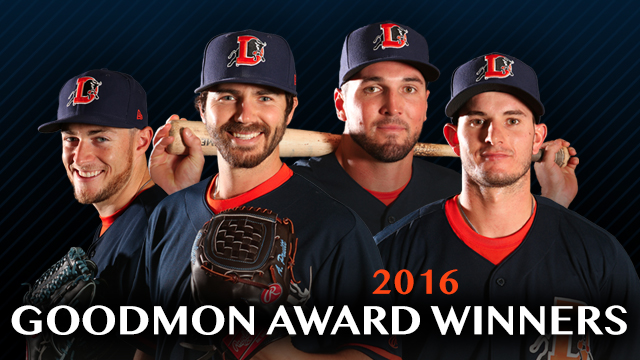 Prior to Sunday evening's contest against the Norfolk Tides, the Durham Bulls will recognize the winners of the 2016 Goodmon Awards. The 23rd annual Goodmon Awards, named for Capitol Broadcasting President and CEO Jim Goodmon, acknowledge Bulls players for their contributions to the success of the team both on and off the field.

Infielder Daniel Robertson has been selected as the team's Batter of the Year in his first season at the Triple-A level. The 22-year-old leads the team with a .255 batting average, is second on the squad with 114 games played and a .352 on-base percentage, and ranks fourth on the team with 19 doubles. The former first round draft pick of the Oakland Athletics has played at least 18 games at third base, shortstop and second base.

27-year-old Austin Pruitt is the team's Pitcher of the Year, going 8-10 with a 3.69 ERA. The right-hander is tied for the league lead with 27 games started, and ranks second on the circuit with 141 strikeouts. The Triple-A rookie is fourth in the IL with 158 2/3 innings pitched, while his 1.53 BB/9 ratio is the third-best among league starters. The Texas native was the winning pitcher at the Triple-A All-Star Game in July, becoming the first Durham pitcher to achieve the feat.

Outfielder Jake Goebbert has been selected for the Goodmon Award for Team Spirit. Joining the Tampa Bay organization just prior to Opening Day, the 28-year-old has hit .287 at the DBAP in 2016, while splitting time between left field, first base and designated hitter.

Despite his assignment to Double-A Montgomery in July, RHP Mark Sappington is the recipient of the Community Service award. The 25-year-old visited schools throughout the Triangle with Wool E. Bull, handled multiple speaking engagements on behalf of the organization and was frequently spotted chatting with fans before, during and after games.