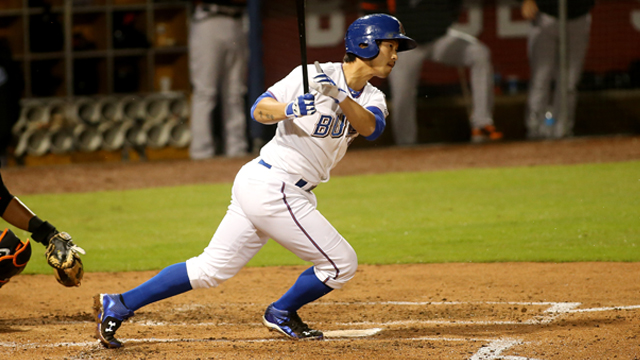 DURHAM, NC - The Durham Bulls halted a five-game losing streak with a 5-4, 11-inning walk-off victory over the Toledo Mud Hens Tuesday night at the DBAP.

Tied 4-4 entering the bottom of the 11th, Richie Shaffer led off with a double on a high pop up down the righfield line. After he advanced to third on a fly out by Vince Belnome, Hak-Ju Lee blooped a single on the back of the infield dirt with the infield drawn in, scoring Shaffer and giving Durham their second extra-inning win of the season.

The Bulls (40-32) fell behind early, as the Mud Hens scored just three batters into the game when Jefry Marte blasted a two-run homer over the Blue Monster. The 2-0 score held until the fourth, when Taylor Motter singled, advanced to third base on a throwing error and scored on a wild pitch to cut the deficit to one.

Motter struck again in the fifth, giving the Bulls a lead when he lined a two-run, bases-loaded double off the Monster. His league-leading 20th two-bagger of the year plated Lee and Bobby Wilson, who had singled and doubled, respectively.

The Durham lead was short-lived though, as in the top of the sixth Mike Hessman drilled a two-run homer to leftfield to put the Hens (31-41) back on top, 4-3. The back-and-forth battle continued in the bottom of the frame when Ryan Brett lined out to rightfield, scoring Shaffer from third to tie the contest.

Jhan Mariñez (4-1) picked up the victory with a scoreless 11th inning, striking out the side. Angel Nesbitt (0-3) suffered the loss, surrendering the winning run to score over 2 1/3 frames. After Durham starter Everett Teaford allowed four runs over six innings while tying a career-high with nine strikeouts, three Bulls relievers combined to shut out Toledo the rest of the way.